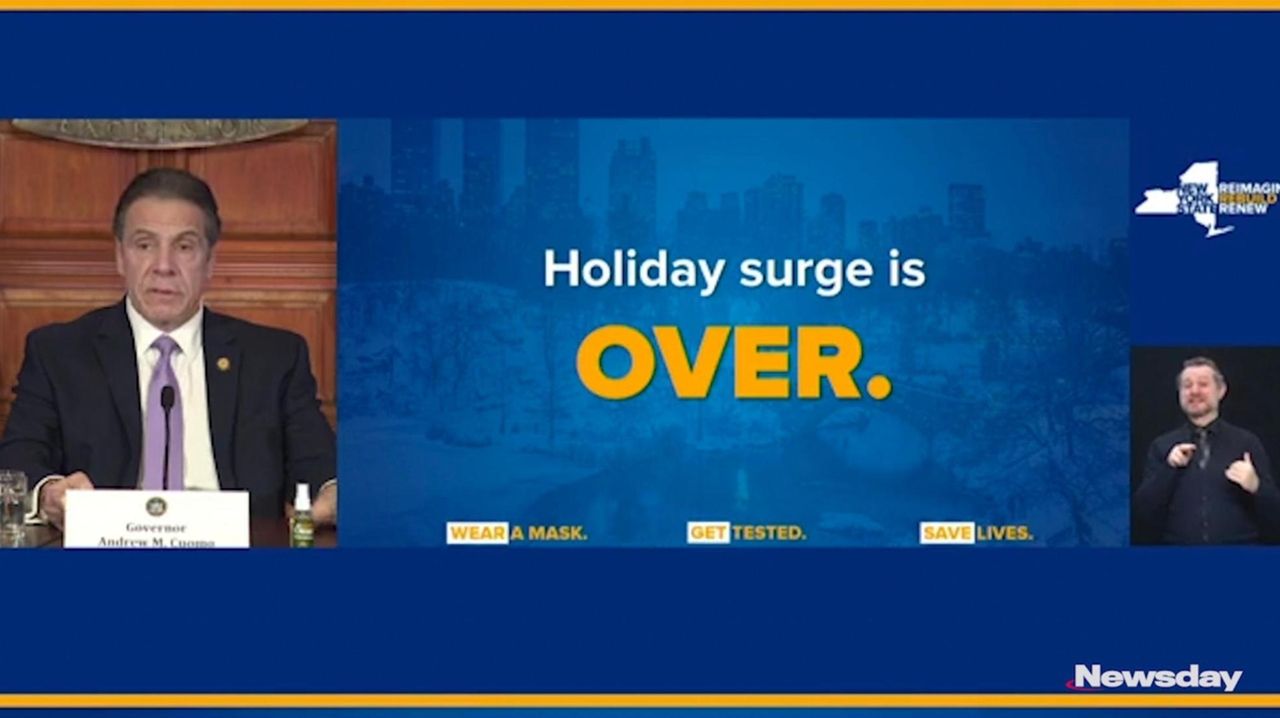 Gov. Andrew M. Cuomo said Wednesday the state is lifting business and gathering restrictions in "microclusters" that had seen higher spread of the coronavirus, including parts of Nassau and Suffolk counties, Brooklyn and Staten Island. Credit: NY Governor's Office

This story was reported by Catherine Carrera, Matthew Chayes and Bart Jones. It was written by Jones.

The state is lifting restrictions for businesses and gatherings in "microclusters" that had seen high levels of spread of the coronavirus, including areas in Nassau and Suffolk counties and Brooklyn and Staten Island, Gov. Andrew M. Cuomo said Wednesday.

The governor also said he appreciates President Joe Biden's administration increasing vaccine deliveries to New York by 16%, starting this week, but said that is not nearly enough to adequately supply the first phases of the vaccination campaign.

If New York received enough dosages, Cuomo said, the entire state could be vaccinated in a month with its distribution and administration capability.

Cuomo said the spike in cases triggered by holiday gatherings since late November is "over," allowing for relaxing rules restricting restaurants, school districts, mass gatherings and houses of worship in the most infected zones.

While he said the state is being "hypercautious" in New York City, due to its dense population, he is discussing with the mayor and others potential changes to restrictions on indoor dining.

He expects to make an announcement by the end of the week, he said, and indicated that New York City restaurants may be allowed to return to 25% capacity for indoor dining. "I fully understand how difficult it is that they are closed," he said.

Parts of the Bronx and Queens, as well as the Washington Heights neighborhood in Manhattan and the upstate City of Newburgh, remain under "yellow" hot spot restrictions.

Shanell Baron, assistant manager of the La Gelato and La Pizzeria eateries on Middle Neck Road in Great Neck, said she hopes the relaxed regulations will be good for business, drawing more customers.

"Hopefully, we’ll be able to get more back, because we love our customers, we love being able to celebrate with them," she said. "We love to get our community together to eat, to have fun together."

The eateries, which are kosher and serve sushi, pizza, Israeli dishes and Italian food, have come to rely more on takeout and app services like Uber Eats, Grubhub, DoorDash, Slice and others, as some customers are anxious about dining in person, she said.

Suffolk County schools in yellow zones had stopped weekly COVID-19 testing of students and teachers weeks ago when results showed they had a lower infection rate than that of the yellow zone region, said Ronald Masera, president of the Suffolk County School Superintendents Association.

Masera helped districts in the yellow zones, such as Riverhead and Hampton Bays, coordinate with the county's Department of Health Services to set up testing sites in their schools when the yellow zone designations were initially enacted.

"Any testing monitoring that we’ve done on Long Island has demonstrated that the school infection rate is lower than the region," Masera said Wednesday. "We feel very confident that the things we’re doing in schools are working."

The decision to lift the yellow-zone restrictions won’t change much of the day-to-day in schools, he added.

"Our job in the schools is to make sure we’re utilizing universal masking, emphasizing social distancing and focusing on respiratory and hand hygiene so we can minimize spread at all times in our schools," Masera said. "Whether or not we have a zone classification doesn’t change what we do on a daily basis in our schools."

Nassau County Executive Laura Curran said she was pleased with the lifting of the yellow zone restrictions.

"By and large our residents, businesses and schools have been doing the right thing — wearing masks, social distancing and avoiding unsafe gatherings," Curran said. "But we need to keep it up. We must stay vigilant and continue using common sense so we can keep up this progress."

Businesses in yellow zones had been allowed to remain open. The capacity limit for houses of worship remained at 50% like the rest of the state. Mass gatherings were limited to 25 people — indoor and outdoor. Restaurants were able to offer indoor- and outdoor-dining with a limit of four people per table. Schools did not close but had to test 20% of students, teachers and staff weekly.

However, other coronavirus restrictions remain in place throughout the state.

According to state regulations, retail and personal care businesses can operate at 50% capacity in regular zones, and gyms and fitness centers at 33%. Gatherings are limited to 10 people residential and 50 people nonresidential.

Restaurants outside New York City can operate at 50% capacity, with 10 people per table maximum. Restaurants must close by 10 p.m. Social distancing and masks are required, though masks can be removed to eat.

In the latest test results from Tuesday, the state measured an overall positivity rate of 5.44%.

Still, he noted that the levels statewide are generally declining since the holiday spikes.

The number of new confirmed virus cases was 977 in Nassau, 1,084 in Suffolk, and 4,947 in New York City from test results Tuesday.

The number of people hospitalized Tuesday with the virus was 8,771 statewide, a decrease of 60 from the previous day, though 170 people died of coronavirus-related causes.

Cuomo cautioned that the virus has been constantly shifting and presenting new challenges.

"This COVID beast has morphed four times while we've been dealing with it," he said. "Tomorrow will be different, if you ask me, and if something changes, we will change. We can only make decisions based on the facts that we have today."

Being "functionally out" of vaccine on Wednesday, the state is going "week-to-week" managing vaccine plans, because 96% of the first dosages it received from the federal government for the first six weeks of the vaccination effort have been used, Cuomo said.

He said Biden's commitment to give New York the same allocation for the next three weeks, at a level 16% higher than previous weeks, will at least make it easier for hospitals, pharmacies and other vaccine sites to plan.

But "the sixteen percent increase does not solve the fundamental anxiety that has been created" since 7 million people are now eligible for the shots in New York while the supply lags far behind. The state's population is about 19.5 million.

Cuomo said he believes it will take the country six to nine months before it has enough dosages to inoculate the vast majority of the population and get the virus under control.

"It’s going to take six months to get the full supply, but at least we know that there is an end point where we are going to get the kind of supply that we need," he said. "This is all great news from the federal government."

He warned, though, that the "nightmare" scenario would be if a variant to the virus breaks out which is resistant to the vaccines.

NYC postpones mass vaccinations, with city, state low on supply NYC Mayor Bill de Blasio said the city could vaccinate half a million weekly, if not for short supply. Cuomo says the state could give millions of shots a week. The state has administered 91% of the doses it has received in six weeks. Cuomo urges Black New Yorkers to get COVID-19 vaccineThe governor and two Black members of Congress traveled to a public-housing residence in Brooklyn to urge Black New Yorkers to get vaccinated, amid polls showing Black Americans are among the most reluctant to obtain a vaccine.