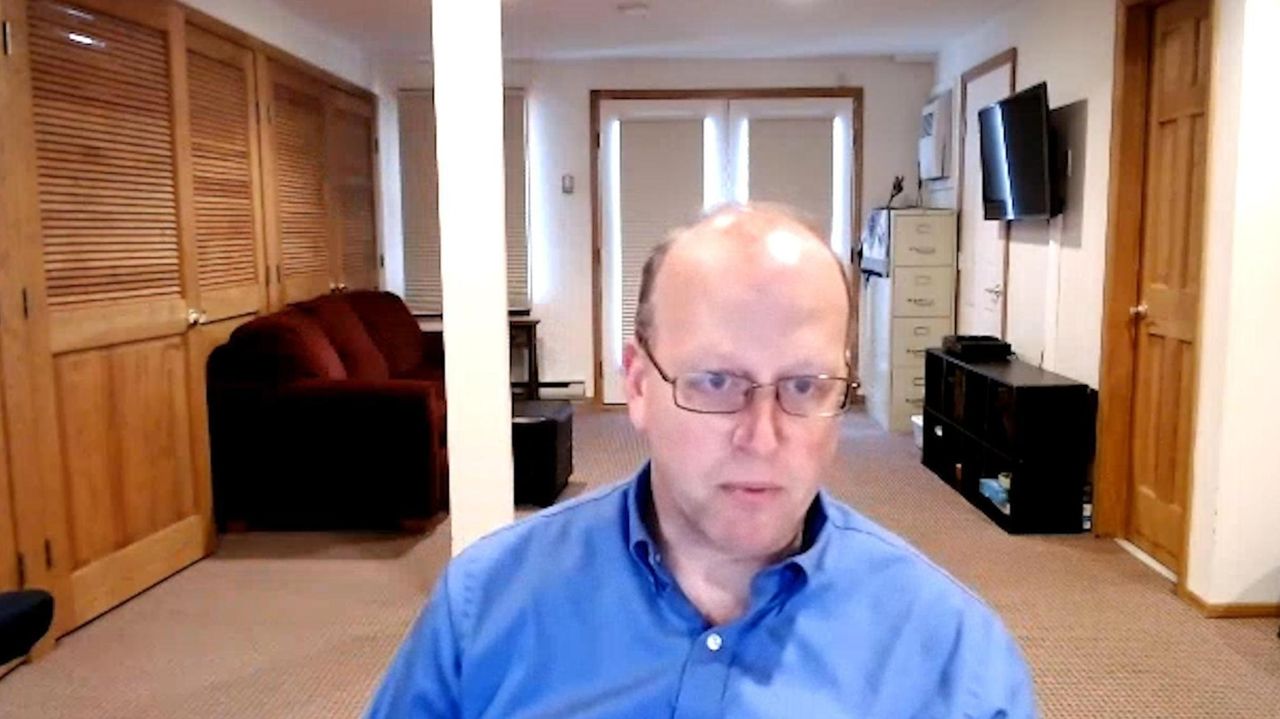 Stony Brook University professor of public health Jaymie Meliker says the flattening of the curve that health experts were seeking is showing in coronavirus statistics from both Nassau and Suffolk counties. Credit: Newsday / Sandra Peddie

COVID-19 hospital patient totals on Long Island have reached a plateau, and statistics show that social distancing is driving fewer increases in hospitalizations and intubations, a Newsday analysis shows.

The flattening of the curve that health officials have hoped for is evident in a leveling of numbers of coronavirus hospital patients and fewer new patients between April 9 and 13 in both Nassau and Suffolk counties.

Carol Gomes, chief executive officer and chief operating officer of Stony Brook University Hospital, said the hospital had reached “an equilibrium” of cases, with roughly the same number of patients coming in as being discharged. She said that she hopes to see discharges outpace admissions within a few days.

That slowing of patient admissions comes after statistics showed a surge in new virus cases last week. Between April 6 and April 8, the number of positive cases on Long Island jumped 56%, and the number of tests increased by 69%, forcing hospitals to scramble for reinforcements for their exhausted staffs.

Some 4,088 patients were hospitalized on Long Island as of April 10. Three days later, the number was 4,082, according to data provided by Nassau and Suffolk counties.

“It looks like it’s flattening out quite a bit,” said Jaymie Meliker, an epidemiologist who is a professor at Stony Brook University’s Program in Public Health.

When the virus first started moving through the population, it was doubling every three to five days. Now it appears to be doubling every 20-30 days, he said.

Within the next week, Long Island should see a significant drop, likely 10%, in new cases and deaths, he said.

However, the number of seriously ill patients who are intubated has not changed much overall, ranging from 956 on April 9 to 947 on April 13.

Jarrett said he expected the number of patients on ventilators to increase in the coming week.

“The problem is these patients are very sick, and they continue to be sick,” he said.

A patient hospitalized with COVID-19 has an average stay of five to six days, he said. A COVID-19 patient in ICU might remain on a ventilator for eight to 10 days up to three to four weeks.

“It takes a long time to get healthy enough to be discharged,” he said.

Northwell Health has brought in 200 nurses from staffing agencies and 50 doctors from Intermountain Health, a hospital system based in Salt Lake City, Utah. In addition, it has reassigned about 150 employees who work at Northwell’s outpatient facilities, Lynam said.

Catholic Health Services has augmented its staff by hiring 50 nurses, with an additional 30 starting next week. It also has brought in nursing graduates from Molloy College and Advanced Practice Providers, or nurse practitioner and physician assistants, from Touro College, and is hiring more cleaning staff, O’Shaughnessy said.

Lynam said the numbers indicate a downward, but not significantly downward, trend.

On April 13, just 82 patients were admitted to Suffolk hospitals, according to data submitted by hospitals to the state that was obtained by Newsday. On the same day, 108 patients were discharged.

Four days earlier, on April 9, there were 101 new patients admitted to Suffolk hospitals and 132 discharged.

About 40% of the patients who show up at Northwell Health’s emergency rooms are admitted, Lynam said.

Because it takes about a week for a person with COVID-19 to develop symptoms and another week to get sick enough to go to the hospital, the new cases reported at hospitals today reflect the spread of the infection two weeks ago, Meliker said.

Additionally, he said that only one-tenth of the COVID-19 cases have been reported. One study in Iceland found that 50% of people who tested positive for the virus never had symptoms. He estimated that the true total number of cases on Long Island is close to 200,000.

That’s why antibody testing is so critical, he said. Once the virus has infected 50% of the population, it will slow down the spread significantly. Right now, it appears to have infected about 20%-25% of the population, which is not enough to slow the rate of infection.

“The big question is what do we do next? We just don’t know,” he said.

Meliker said one option that appeared to be the least risky would be to open schools while continuing social distancing for other vulnerable populations, like the elderly or people with underlying conditions. Reopening schools would help the economy by enabling a number of people to return to work.