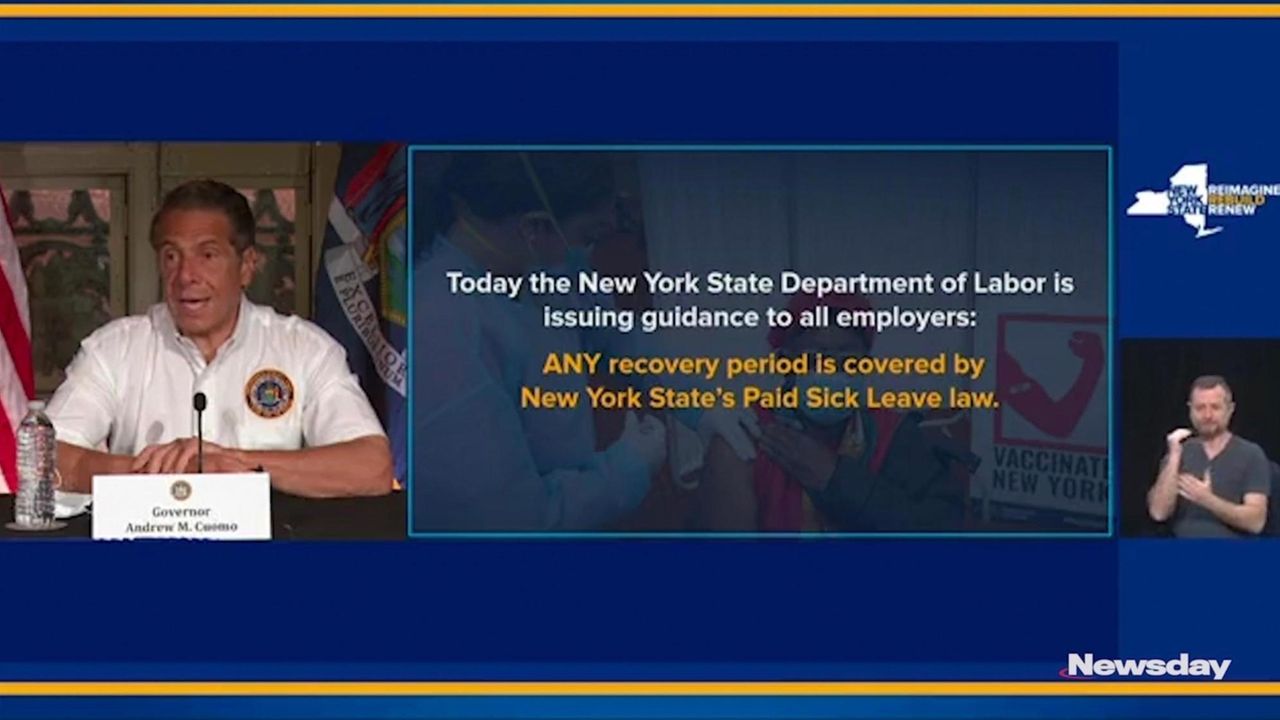 On Thursday, Gov. Andrew M. Cuomo said people who missed a day of work because of side effects from the COVID-19 vaccine must receive a paid sick day from their employer. Credit: NY Governor's Office

This story was reported by Daysi Calavia-Robertson, Matthew Chayes, Lisa L. Colangelo and Bart Jones. It was written by Jones.

People who miss a day of work because of side effects from the COVID-19 vaccine must under law receive a paid day off from their employers, Gov. Andrew M. Cuomo announced Thursday.

The governor said he will be issuing the guidance because of fears among some people that they will miss work — and not get paid — if they experience side effects. Cuomo said many people for that reason are not getting the vaccine shots.

"If someone has side effects and they take off a day, that by law will be considered a paid sick leave day," he said at a news conference in Manhattan.

In a separate statement, his office said "any necessary recovery period from the COVID-19 vaccine is covered under the state's Paid Sick Leave Law."

Cuomo said a recent survey by the Kaiser Family Foundation indicated that 48% of unvaccinated Americans are worried about losing a day of work after they get the shot.

He downplayed the potential of suffering side effects, even though some people feel substantially weak or have flu-like symptoms after getting vaccinated.

"I don’t know anyone, frankly, who couldn’t go to work the next day because of the side effects of the vaccine," he said. "But if that’s an issue for you, that issue is resolved. You won’t miss a day’s pay because of getting a vaccine."

Elizabeth Wellington, co-owner of trucking business Wellie the Transporter in Elmont, and deputy director of the Long Island African-American Chamber of Commerce, said she can understand why sick leave may be necessary. Wellington, who employs three people, said she felt "under the weather" after getting the second dose of her COVID-19 shot.

"If your employee gets sick after receiving the COVID vaccine, the right thing to do is to pay them for the day," Wellington said. "I strongly support the governor’s measure. In my eyes, it’s about being compassionate."

Cuomo announced the sick leave requirement as the rate of New Yorkers getting vaccinated has significantly dropped in the last few weeks, following a major rush when the vaccines first became widely available at the start of the year.

He compared it to the grind of gaining a few yards on offense in a football game.

The paid sick day is one of many measures the state is taking to try to increase the number of people vaccinated, from chances at winning money in the state lottery to winning a free four-year full ride to a SUNY or CUNY college.

Along those lines, CVS Pharmacy announced Thursday it will offer people who receive the COVID-19 vaccine at its stores and other locations a chance to win prizes through a sweepstakes program that starts June 1.

Prizes range from cash awards of $5,000 for family reunions to tickets to the Super Bowl LVI and seven-day cruises, CVS officials said. The weekly drawings will last for six weeks.

People are eligible if they get the vaccines at a CVS Pharmacy retail location, employer-based Return Ready clinic or long-term care facility.

While the vaccination rate is slowing, other COVID-19 indicators in the state are continuing a promising trend, Cuomo said Thursday.

The statewide daily average of positive results from 162,450 tests was 0.65%, the lowest since Aug. 27, state data released Thursday showed.

The number of new confirmed coronavirus cases was 55 in Nassau County, 72 in Suffolk County, and 424 in New York City.

Statewide, 10 people died Wednesday of causes related to the virus, the lowest figure since Oct. 30, he said. None were on Long Island.

Still, the deaths showed the virus is still here and remains deadly, he said.

County Executive Laura Curran said Thursday that Nassau has gone one week without any deaths from the virus.

"This is a major milestone in our county’s recovery from a once-in-a-lifetime crisis, and I want to thank our residents for the hard work and sacrifice that got us to this point," she said.

Part of the reason for declining deaths is that 74% of adults over age 18 in Nassau have received at least one vaccine dose, she said.

New York City personnel have administered vaccines for the virus to 9,000 homebound New Yorkers, in addition to 3,000 family and caregivers of those homebound people, Mayor Bill de Blasio said Thursday.

The program began in March and initially involved the one-shot Johnson & Johnson but later added the two-shot options after a brief, nationwide suspension of the Johnson vaccine's use over a rare clotting disorder. The Pfizer-BioNTech and Moderna vaccines are given in two doses, spaced weeks apart.

He said the city’s program, involving the New York City Fire Department administering the shots, is expanding to include anyone 75 and older or who is disabled.

De Blasio also said that vaccine buses would be at area beaches and other population venues, such as Governors Island, for Memorial Day.

NY reports lowest positivity rate since start of COVID pandemicThe 0.59% positivity level in test results from Thursday outdid the previous low of 0.65% last Aug. 27, according to state data. Incentives being used to encourage vaccinations, but do they work?Where New Yorkers once spent hours scouring the internet in a search for appointments, now they can walk into locations all over the state and receive the COVID-19 vaccine, and often walk away with a reward. State to raffle off college scholarships to young people who get COVID-19 vaccineStarting tomorrow through July 7, the state will raffle off 50 four-year scholarships to any public college or university to 12- to 17-year-olds who get their first Pfizer dose, Gov. Cuomo said. See the percentage of LIers who are fully vaccinatedCheck the latest numbers on how coronavirus has spread in your community.