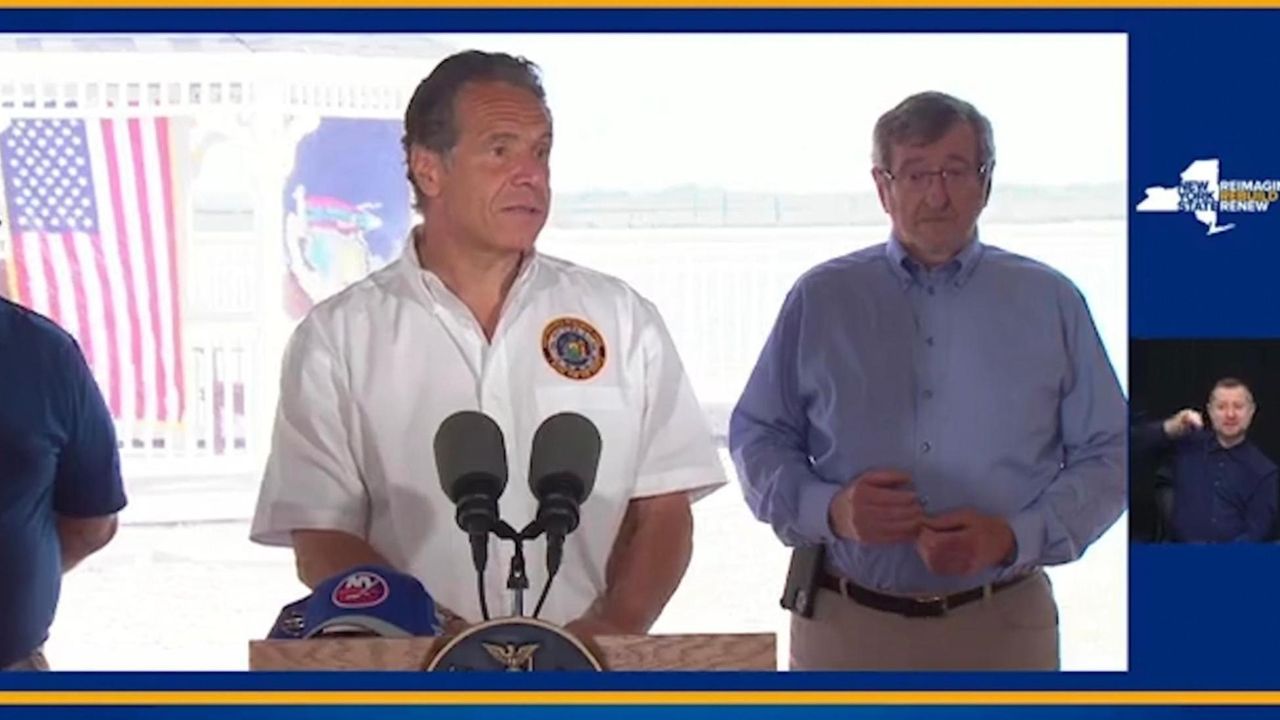 On Monday, Gov. Andrew M. Cuomo announced the "Shot in the Park" program: Anyone who gets a vaccine at one of New York's 16 state park pop-up sites will get a free two-day family pass to one of those parks. Credit: NY Governor's Office

This story was reported by Robert Brodsky, Matt Clark, Bart Jones and David Reich-Hale. It was written by Jones.

Long Island has the best vaccination rate of any region in the state, with nearly 70% of people 18 years or older receiving at least one dose of a COVID-19 shot, Gov. Andrew M. Cuomo said Monday during a visit to Jones Beach.

The governor also praised Long Island's seven-day average of positivity for COVID-19, which at 0.72% was the region's lowest figure since Aug. 29.

But even as coronavirus indicators are promising, Cuomo warned that vaccination rates are dropping dramatically and that the vast majority of the population needs to be inoculated to wipe out the deadly virus.

"We have the beast contained, but we have to continue to contain the beast," he said at a news conference.

He offered a new incentive to those who haven’t gotten their shots: Get vaccinated this week at any of the state’s 16 parks where shots will be administered and you will get a free two-day "family pass" to any state park.

Long Island has the best vaccination rate of any state region, with nearly 70% of people 18 and older receiving at least one dose of COVID-19 vaccine.

People vaccinated this week at any of 16 state parks sites will receive a free "family pass" for two days at any state park.

In addition to the state-run mass vaccination site at Jones Beach State Park, Cuomo said 15 other state parks will open pop-up sites this week as part of the program.

While the state reported Monday a one-dose vaccination level of 69.55% among residents 18 and older in Nassau and Suffolk counties combined, when all of the Long Island population is considered that figure was 56.35%.

The state will set up the Long Island sites in cooperation with Northwell Health, whose president and CEO Michael Dowling noted the progress in dropping positivity and hospitalizations.

The shots are key to protect that progress, Dowling said: "You don’t want to repeat what we have seen for the past 12 months."

Dr. Jason Golbin, chief medical officer at Catholic Health, said the region's success in vaccinating residents can be attributed to having a number of successful distribution sites on Long Island, "a strong push from health care leaders here and the state's push from governmental leaders."

Long Island was hit harder than many parts of the state, and that motivated more people to get vaccinated, added Dr. Adhi Sharma, chief medical officer at Mount Sinai South Nassau in Oceanside.

"We had a harsh experience and lost a lot of lives," Sharma said.

Cuomo said the number of New Yorkers getting vaccinated has declined "dramatically," to less than 100,000 a day.

Dowling, too, warned that the virus is not extinguished.

"The virus is sneaky," he said. "It hides, it hides in the shadows. The biggest danger is thinking it's gone, disappeared … It's hanging around and it's waiting to pounce."

D'Angelo said Northwell has vaccinated, on average, about 100 people at its pop-up sites, which have included stops at the Hempstead and Hicksville Long Island Rail Road stations, and an empty storefront at the Westfield South Shore mall in Bay Shore.

The Johnson & Johnson COVID-19 vaccine, which is delivered in one dose, is administered at the events. D'Angelo added that younger New Yorkers have engaged with Northwell's pop-up locations because they're convenient.

"This way there isn't a need for a follow-up appointment," he said. "If someone comes over and says they'd rather have the Pfizer or Moderna vaccine, we point them toward our fixed locations, which have doses available."

In NYC, get a shot, enter a contest

Anyone 18 and older who goes to a city-run vaccination site, and gets a shot through early July, will qualify for hotel packages, Broadway shows, concert tickets. This week’s prizes, the mayor said, include a one-year pass to Crunch Fitness and 50 three-day passes to the Governor’s Ball concert series.

"This just shows there are so many ways to get people focused and excited about getting vaccinated so we can keep moving forward with a recovery for all of us," de Blasio said.

To date, the city has administered just under 8 million doses of the vaccine, with 70% of all city seniors and 60% of all adults receiving at least one dose. Half of city adults have completed their vaccination series, de Blasio said.

The mayor also announced that the "Late Show with Stephen Colbert" will return to the Ed Sullivan Theatre on June 14, with a full audience of vaccinated fans.

Meanwhile, Pfizer has begun the review process for full FDA approval — the vaccine is currently approved only on emergency-use basis — for individuals 16 and older. A similar review for younger adolescents will begin later this year, officials said.

"That will be a topic of discussion. It already is. And it’s a controversial topic of discussion," Cuomo said Monday when questioned about requiring the vaccine for students if full FDA approval is granted. "Remember we mandated the measles vaccines a couple years ago when there was an uptick in measles. And it was really controversial. You have some people who never sent their children back to school because they are against the vaccine."

The governor said the vaccines cannot be mandated in public schools while under an emergency-use authorization.

Cuomo touted a decreased positivity rate across the state and its regions, saying New York's level tracked at 1.09% from the latest round of daily testing, which he said compared to a 2.6% national average of positivity.

Positivity was measured at 0.69% in New York City over the previous seven days. The seven-day average for the state was 0.9%, according to state data.

That was "49 straight days of decline," Cuomo said.

Dowling said the number of COVID-19 patients at Northwell has dropped from a high of about 3,500 to 195 as of Monday.

Still, Cuomo urged "the youthful and the doubtful" to get their shots.

"It’s not over," Cuomo said. "We are managing it by what we are doing and the tool that manages it is the vaccination, and that is key to keep that vaccination going."

The number of new confirmed cases in test results from Sunday was 43 in Nassau County, 57 in Suffolk County and 340 in New York City.

Statewide, 14 people died Sunday of causes related to the virus, including two in Suffolk.

Do you need a mask? Here's a guide to policies at stores around LIMany companies have revised their mask policies, citing the new CDC guidance, spread of the virus and contagious delta variant. Newsday has a list of mask policies at some of LI's largest retailers. I got my COVID-19 vaccine — what can and can't I do?There are some clear guidelines from the CDC and other authorities on what you can and can't do now, but other decisions depend on your comfort level. Here's a guide for what to know. See latest news on the coronavirus, vaccinesStay up to date with the latest on the pandemic.