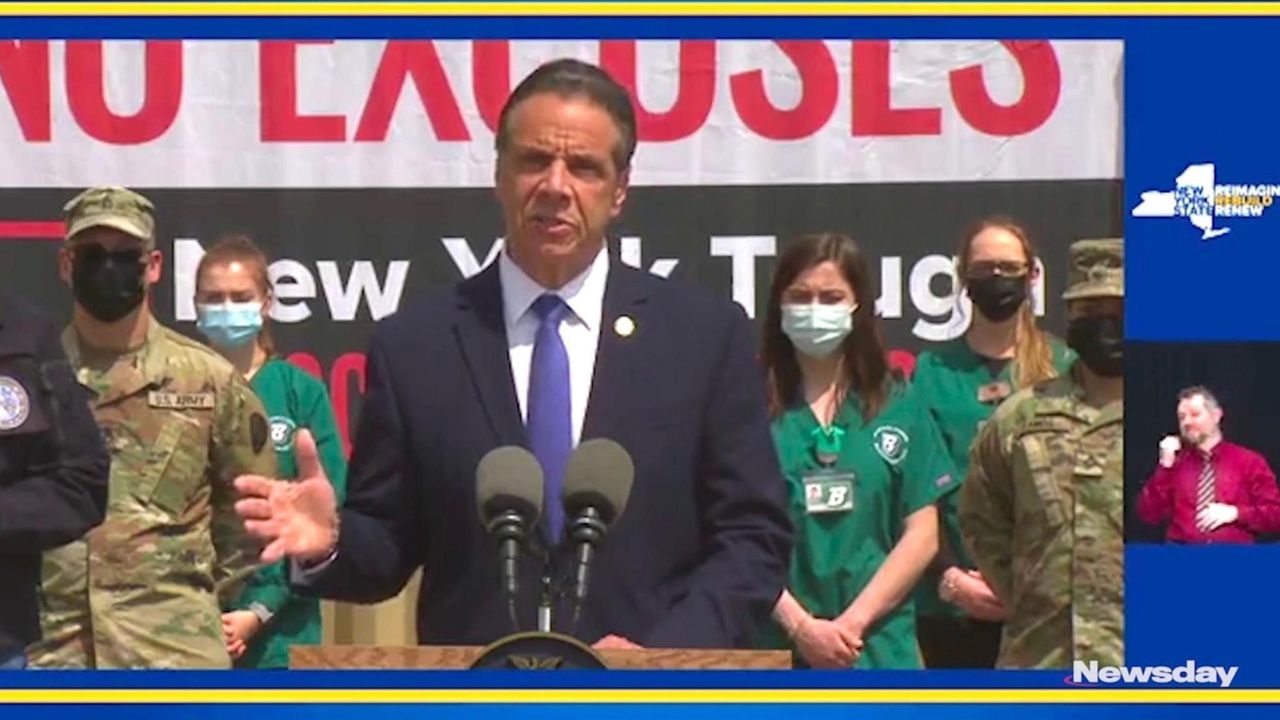 This story was reported by John Asbury, Bart Jones, Ted Phillips and David Reich-Hale. It was written by Jones.

Walk-ins with no scheduled appointment will be allowed for all New Yorkers 16 and older starting Thursday at state-run COVID-19 vaccination sites, Gov. Andrew M. Cuomo announced Tuesday as he tries to ease access to the vaccine since demand is dropping.

"All New Yorkers 16-plus, just come in … and you are eligible for a vaccine," said Cuomo, speaking from a vaccination site in upstate Johnson City.

The number of vaccines administered in New York every 24 hours has dropped from 175,000 to 115,000, even though supply remains steady, Cuomo said.

The shift to walk-ins is a stark contrast from the beginning of the vaccination campaign in December and the first months of the year. Then, state residents got access to the shots by priority groups and many still struggled to secure appointments amid limited supply. Appointments are now easier to find at pharmacies and at county and state sites.

Cuomo also said the state will adopt revised guidelines from the U.S. Centers for Disease Control and Prevention, relaxing masking requirements outdoors for people who are vaccinated.

Long Beach, one Nassau community that sees many outdoor visitors during the warm months, said it will follow CDC guidance on wearing masks outdoors and on the boardwalk.

Residents were previously advised to wear masks on the boardwalk when unable to socially distance and while going to and leaving the beach on beach walkovers.

The state's seven-day average was 2.06%, the lowest level of positivity since Nov. 7, Cuomo said.

The number of new confirmed cases of the virus in test results Monday was 152 in Nassau County, 204 in Suffolk County and 1,191 in New York City. Those numbers on Long Island are a big drop from weeks ago, when each county neared or surpassed 1,000 new cases a day.

But Cuomo also warned Tuesday that COVID-19 is far from vanquished, and that it is still killing people and making others seriously ill. On Monday, 26 people died in New York of causes related to the virus, state data showed.

"We’re making progress. People are getting vaccinated. Positivity is coming down," Cuomo said. "But COVID is still dangerous."

Vaccinations with the one-dose Johnson & Johnson vaccine resumed on Long Island days after the federal government lifted its pause on that vaccine and the state cleared it for use, following a review of rare blood clot cases among a small number of vaccinated women.

Northwell Health on Tuesday said it has started administering the Johnson & Johnson COVID-19 vaccine to homebound patients, non-COVID-19 patients being discharged from one of its hospitals and patients at some of its ambulatory practices.

The state cleared the Johnson & Johnson COVID-19 vaccine for use immediately after the federal government on Friday lifted a nearly two-week pause on it, following reports of rare blood clots linked to them.

Out of nearly 8 million people in the United States given the vaccine, 15 women, most under age 50, had developed blood clots.

Nassau County on Tuesday said it had about 250 doses of the Johnson & Johnson vaccine, which it is delivering to homebound patients. Suffolk did not respond to a request for comment about its Johnson & Johnson supply.

Mount Sinai South Nassau said its Vaxmobile, a COVID-19 vaccination mobile unit, will be administering the Johnson & Johnson vaccine starting Wednesday at a Town of Hempstead senior center in Levittown.

Oyster Bay announced Tuesday that it has opened a COVID-19 testing location at the William P. Bennett Hicksville Community Center but is limiting tests for now to students at public and private schools in the town, their families and school faculty.

Garden City-based ProPhase Labs, which the town awarded a contract on April 20 to test town employees, will provide saliva tests with results in 24 hours to those eligible.

Town Supervisor Joseph Saladino said he hoped "this service will ensure that the sports schedules continue for our student-athletes, that our students will be able to have graduations, proms, homecomings, and they can all be held in a very safe and successful way."

"We’re going to continue to help students have a normal life once again," Saladino said.

Saliva testing for COVID-19, which has been around since last year, is a noninvasive way to test for the disease that doesn’t involve a cotton swab up the nose.

ProPhase Labs chief executive Ted Karkus said the company can handle up to 50,000 tests a day and plans to open four or five testing sites in Oyster Bay when the town approves.

The testing sites, which eventually will be open to the public, will provide the tests with no out-of-pocket expenses.