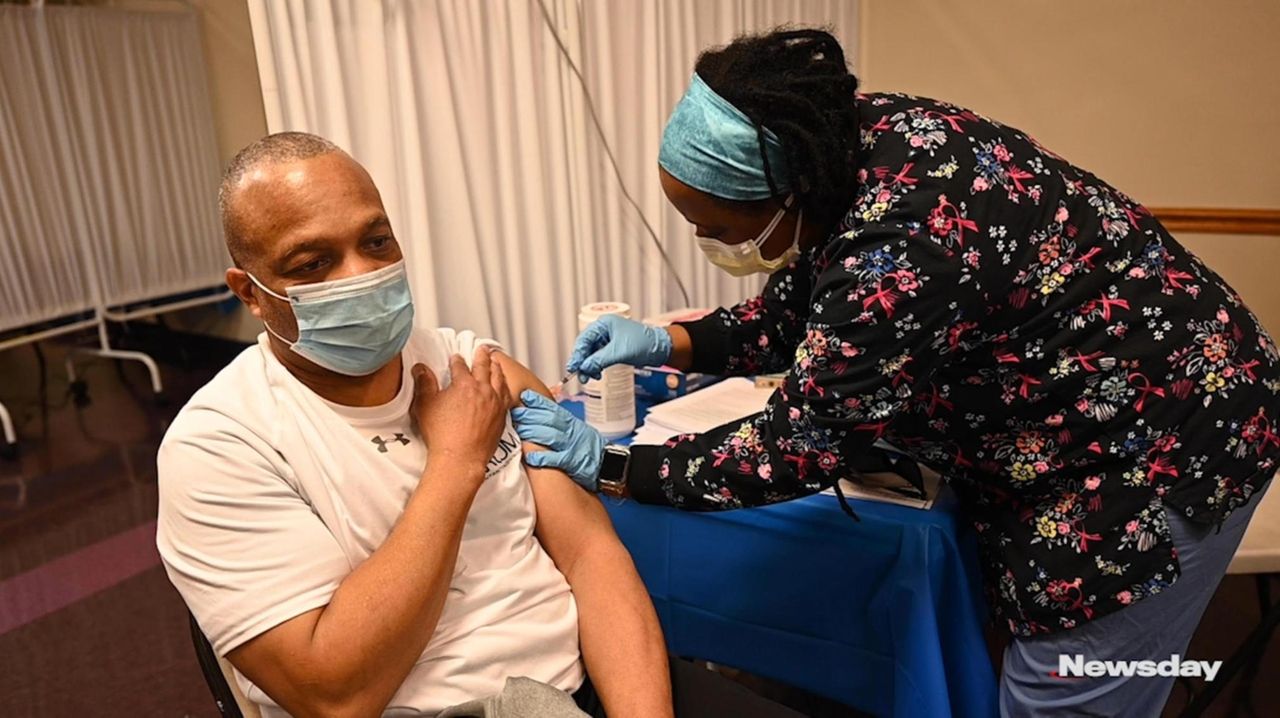 This story was reported by Robert Brodsky, Bart Jones, David Reich-Hale, Ted Starkey and John Valenti. It was written by Reich-Hale and Jones.

Long Islanders scrambled for vaccine appointments on Tuesday, the day state residents 30 and older became eligible for the shots.

In many cases, appointments lasted minutes before being snatched up.

CVS posted appointments for Saturday at locations on Long Island, including Patchogue, Bay Shore, Glen Cove and West Islip — but the slots were taken quickly.

"As we receive vaccine supply, we will add new appointments and open additional locations," said Tara Burke, a CVS spokeswoman.

Walgreens also had sporadic appointments that were quickly booked.

The new eligibility expansion is "a monumental step forward in the fight to beat" the coronavirus, Gov. Andrew M. Cuomo said in a statement.

"All appointments must be made online, and if you do not see any appointments currently available in your area, we encourage you to check back regularly as additional appointments open up," said Stefanie Shuman, a communications manager for the supermarket chain.

She added that all the Stop & Shop Long Island pharmacies are cleared to vaccinate eligible individuals.

"We typically update it at least once per day, but it depends on supply," she said. "We typically post at least 500 new appointments, but the other day we posted 7,000. As you can see, it varies."

State officials did not respond to a request for comment on how the first day of eligibility went for the new age groups trying to sign up.

But at the same time the groups became eligible, positivity levels in testing for COVID-19, along with new confirmed cases, remained stable in New York, underscoring how the state has stalled in its efforts to eradicate the virus.

As President Joe Biden and other federal officials were warning that the country is slipping in its efforts to control the virus and the United States may face a "fourth surge," area infectious disease experts called the COVID-19 numbers a concern.

"If you're not immune, the virus will find you," said Dr. Alan Bulbin, director of infectious diseases at St. Francis Hospital in Flower Hill. "It's a race against time, where it's immunity vs. the virus. I think we will be better off when summer rolls around, but right now, yes, it's a concern."

Dr. Bruce Polsky, chairman of medicine at NYU Langone Hospital-Long Island and an infectious disease specialist, said "the suspicion is as we've started to liberalize in terms of gatherings, and in addition seen a significant amount of variant virus circulate, the numbers have plateaued, and perhaps even crept up."

The statewide daily positivity level in test results Monday for COVID-19 was 4.28%, while the seven-day average was 3.43% statewide and 4.34% on Long Island.

Nassau and Suffolk continue to have among the highest positivity levels in the state. During the summer, the levels had dropped to about 1% both statewide and on Long Island.

The number of new confirmed cases in test results from Monday was 516 in Nassau, 612 in Suffolk and 3,118 in New York City. During the summer, the daily number in Nassau and Suffolk was well below 100.

Across the state, a total of 61 people died Monday of COVID-19-related causes, including eight each in Nassau and Suffolk.

Biden on Monday warned that too many Americans are declaring virus victory too quickly, appealing for mask requirements and other restrictions to be maintained or restored to stave off a "fourth surge" of COVID-19.

The head of the Centers for Disease Control and Prevention, Dr. Rochelle Walensky, said during a virtual White House health briefing that she had a feeling of "impending doom" if people keep easing off.

The double dose of warnings came even as Biden laid out hopeful new steps to expand coronavirus vaccinations, with all adults to become eligible over the next five weeks. Biden announced plans to expand the number of retail pharmacies that are administering vaccines, and investments to help Americans get to vaccination sites. But the optimism was tempered by stark warnings about the potential for another wave of cases.

"This is deadly serious," Biden said, urging governors to reinstate mask mandates and other restrictions that some states have been easing.

Inmate visitation at the Suffolk County Correctional Facility, which was scheduled to resume April 6, has been postponed indefinitely due to a recent uptick in COVID-19 cases among staff members and throughout the county, the Suffolk County Sheriff's Office announced Tuesday.

Citing the "health and safety" of inmates, visitors and staff, Sheriff Errol D. Toulon Jr. said the decision was made in an effort to keep the virus out of the county jails.

"We have been very successful in keeping the virus out of our jail population so far," Toulon said in a statement. He added that "these measures will remain in place until this most recent wave is stemmed."

While available records show the number of new COVID-19 cases — and the 7-day average — is down from January highs, Suffolk County officials said new cases were on the rise again in recent weeks, with the weekly average up about 100 cases per day in March.

About 29% of the county's population — which totals about 1.48 million — had received at least one dose of the coronavirus vaccine as of 11 a.m. on Monday, according to state data.

Nassau will vaccinate 800 Freeport residents between Tuesday and Thursday at Zion Cathedral, a pop-up site on Grand Avenue, as part of the county’s effort to distribute the vaccine in Black and Hispanic neighborhoods. The vaccines are being distributed by Northwell Health officials.

"We know there is an issue of vaccine hesitancy," said County Executive Laura Curran at a news conference Tuesday outside the Cathedral.

Bishop Frank White of Zion Cathedral said the pandemic has been "devastating" in communities of color.

Just over 36% of Nassau residents have received at least one dose of the vaccine — the highest percentage in the state — while the county expects to surpass 500,000 people vaccinated by as early as Wednesday, Curran said.

Curran said the county is growing its vaccine infrastructure to handle the expected influx of people seeking shots.

Dr. Lawrence Eisenstein, Nassau’s health commissioner, said high schoolers 16 and older will only be eligible to receive the Pfizer vaccine, while individuals 18 and older can get any of the three approved vaccines. The county does not immediately expect to administer the shots in public schools, he said.

How to get a COVID-19 vaccine appointmentWith limited supplies and constantly changing conditions, it can be difficult for Long Islanders to make an appointment for a vaccine. The resources here might help.  State: New Yorkers 30 and older can get COVID vaccine todayThe new eligibility expansion began at 8 a.m. today — and all state residents age 16 and older will become eligible for the shots on April 6, the state announced. Here's why the state's COVID-19 infection rate has leveled off More New Yorkers are getting vaccinated, preventing the state's infection rate from rising significantly, but the continued spread of the virus among unvaccinated people is preventing it from falling, experts say. See latest news on the coronavirus, vaccinesStay up to date with the latest on the pandemic.

1:56
Mayor: About 40% of NYC public school students return to in-person learning
2:27
Pandemic opened courts to virtual operations, but challenges persist
2:49
Projected fatal drug overdoses increased on LI during the pandemic, statistics show
NY health officials: Students can be 3 feet apart in classrooms
1:54
Online instruction has been liberating, and vexing, for students with disabilities
1:31
A psychotherapist who walks and talks with clients reflects on strength
Didn’t find what you were looking for?