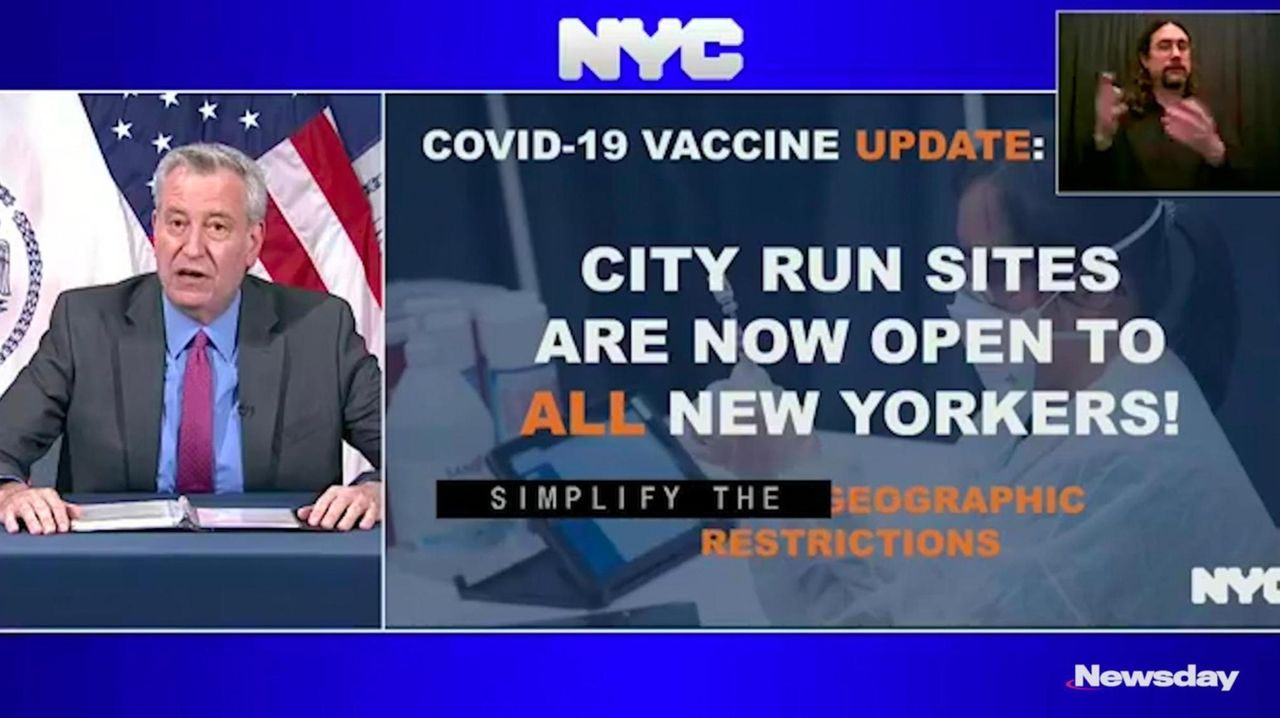 This story was reported by Robert Brodsky, Matthew Chayes, Bart Jones, David Olson and John Valenti. It was written by Chayes and Jones.

A person seeking a vaccine can just walk in and be vaccinated, he said.

"We want to make it simple. You can go to any city-run site," de Blasio said, adding: "You can go there and get a shot."

People who live or work in New York City are eligible. They must be at least 16 years old for the Pfizer-BioNTech vaccine, and at least 18 for the Moderna shot.

De Blasio’s announcement follows a pilot for walk-ins that started last month for older New Yorkers. Earlier this week, Gov. Andrew M. Cuomo had announced that, starting Friday, people 60 and older would be able to walk in for their shots, without appointments, at some state sites.

"A lot of people said it was the reason they came and got vaccinated. That it was a lot simpler for them, and we did not have the kinds of lines we were worried about that might be a problem, so we’re quite confident we can accommodate a much higher volume of walk-ins, so we’re going to make that universal," de Blasio said.

When the first vaccines became available during the winter, appointments were grabbed within moments of being posted. On Long Island as well, once-scarce appointments have become easier to find with increased supply.

Separately, Cuomo announced the state is opening vaccine pop-ups and sending vaccines to essential workers in New York City bodegas and food delivery establishments, so they can have access, without needing to schedule appointments, go anywhere or deal with government agencies.

He said that was a way to thank those service workers who toiled through the pandemic at personal risk so city residents could get their food and other necessities.

"It’s important that everyone gets the vaccine equitably and fairly … people who have access they can get the vaccine like this," said Cuomo, and he snapped his fingers. " … But how about if you had to go to work every day?"

Cuomo spoke from a livestreamed event at the Mission Society of New York City in upper Manhattan. "We want to get those vaccinations up, because that’s what works for everyone."

De Blasio also urged vaccine centers run by other entities to allow walk-ins, and medical providers to reach out to patients to encourage vaccination.

So far, 6.4 million shots have been given in the city, de Blasio said.

Cuomo said the state continues to make progress in beating back the virus, though more people still need to get vaccinated to fully end the pandemic and prevent more surges.

He noted that 45 people died in the state on Thursday of causes related to the virus, including two in Nassau and three in Suffolk.

Health officials have been worried about vaccines’ effectiveness against more contagious variants of the coronavirus, which the New York City health department said last week were dominant in the city, with the so-called "New York variant" most common.

But two recently released studies indicate that the Moderna and Pfizer-BioNTech vaccines are effective against the variant, first identified in November.

Both found a decrease in how effectively the vaccines neutralize the local variant, compared with a previous form of the virus, but that is not expected to result in a significant decrease in vaccine protection, said Nathaniel Landau, a microbiology professor at the NYU Grossman School of Medicine and co-author of one of the studies.

"You still have enough antibodies after vaccination to protect you against infection," he said.

Both non-peer-reviewed studies were published on the bioRxiv website; the NYU study was posted March 24, and the newest one, from scientists from several institutions nationwide, was posted on Thursday.

Landau said the vaccines result in more antibodies against the variant than are produced naturally after a coronavirus infection.

Yet the virus will continue to mutate, potentially into a form that is vaccine-resistant, Landau said, underscoring the importance of getting as many people vaccinated as possible.

Cathy Schuler of Eatons Neck said she arrived at the Nassau Coliseum Thursday at 2:15 p.m. for her second COVID-19 vaccination shot but found the doors locked. She was later told that the Coliseum stops providing vaccines after 2 p.m. on evenings when the New York Islanders have a home game.

By the time Schuler left there were more than a dozen vehicles in the Uniondale parking lot — all with appointments that would not be honored, she said.

"I didn’t get a heads-up at all," Schuler said. "I filled out the questionnaire and they sent me the QT code. It seemed like a go but they definitely have a glitch in their system."

Schuler said she returned to the Coliseum on Friday and was allowed get her second shot but she worries about the others who may not have known to return.

A county official said the private vendor that operates the Coliseum site mistakenly allowed individuals to book appointments for Thursday when none should have been available. But the official said cancellation emails were immediately sent by the vendor and that the County Health Department followed up with a second email offering alternative sites.

In an effort to get the coronavirus vaccine to North Fork residents, Stony Brook-Eastern Long Island Hospital has announced a pop-up vaccination site at the Greenport Fire Department.

The first dose of the two-dose Pfizer vaccine will be offered at the firehouse, located at 236 Third St., on Tuesday between 8 a.m. and 1 p.m.

Second-dose appointments will be scheduled for May 18 at the firehouse, officials said.

See the percentage of LIers who are fully vaccinatedCheck the latest numbers on how coronavirus has spread in your community. How to get a COVID-19 vaccine appointmentWith limited supplies and constantly changing conditions, it can be difficult for Long Islanders to make an appointment for a vaccine. The resources here might help.  Editorial: Vaccine drive needs a boostIt's time for Long Islanders to make a pitch. New data reassuring for COVID-19 vaccination in pregnancyOne of the largest reports on COVID-19 vaccination in pregnancy bolsters evidence that it is safe although the authors say more comprehensive research is needed.