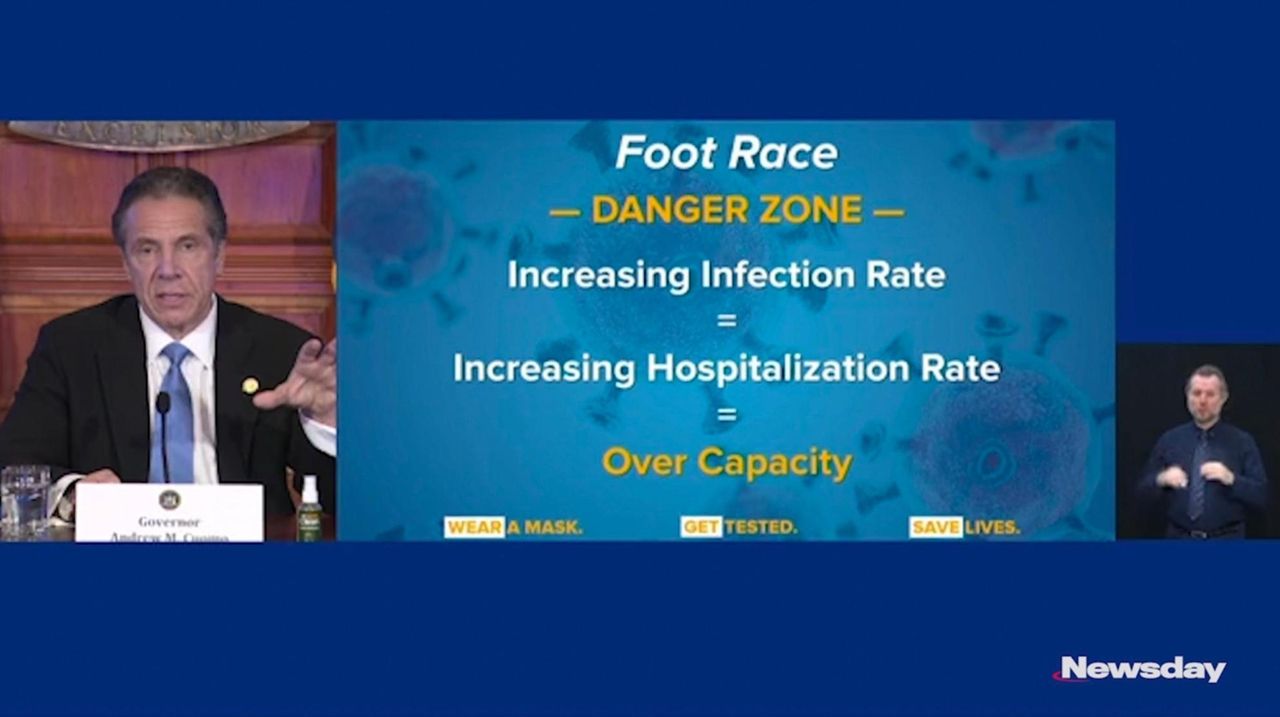 Gov. Andrew M. Cuomo on Friday said New York was in a danger zone and warned of regional shutdowns in the state if hospital capacity continued to shrink because of the COVID-19 surge. Credit: NY Governor's Office

This story was reported by Bart Jones, David Olson, Yancey Roy and Joie Tyrrell. It was written by Jones.

Teachers, police, firefighters and people over 75 years of age will be eligible to receive a COVID-19 vaccine as early as Monday, Gov. Andrew M. Cuomo said, though he cautioned that doses remain in short supply and people likely will wait weeks to months for their first shots.

Health care workers will remain the priority, he said Friday, but in theory some people in Phase 1b could get a vaccine next week.

However, Cuomo said there is not nearly enough supply of the two approved vaccines to quickly meet the demand for the 1a and 1b groups, which total more than 5 million people. The state currently receives 300,000 doses of the Pfizer or Moderna vaccine each week, and, by the state's count, has gotten a total of about 909,000 doses since December.

Just over half those doses have been administered.

The CDC reported having distributed 1.2 million vaccines to New York by Friday.

Cuomo expanded the group of people eligible for shots as criticism mounted of a snail-paced rollout. Cuomo himself criticized some hospitals for moving too slowly.

Nassau County Executive Laura Curran said Friday she had asked for the expansion, and added, "We must continue to pick up the pace."

Cuomo is adding pharmacies and other sites to the places that can give the shots. He expanded the list of people who can administer them to include licensed practical nurses, pharmacists and pharmacy technicians, midwives, dentists, some dental hygienists, podiatrists, EMTs and some students.

The 1b phase also will include public safety and public transit workers, along with other "essential workers."

Cuomo said he expects new distribution centers to quickly start complaining they don’t have enough vaccines. He said he has been speaking with the incoming administration of President-elect Joe Biden, who has indicated he may release second doses that the government has been holding back to administer to those who need first doses.

The Pfizer-BioNTech and Moderna vaccines in use require two doses given weeks apart.

The expanded effort will involve at least 1,200 pharmacies, and could take up to 14 weeks, up to April 16, Cuomo said. It could go faster if more vaccine is made available.

"We can only distribute what we receive, and 14 weeks is a long time," Cuomo said.

The New York State Department of Health plans to open 20 mass vaccination centers around the state, including one to open Wednesday at the Javits Center in Manhattan, Cuomo said.

Eligible people will be able to call participating pharmacies and other providers.

"On Monday, you can start to schedule appointments. Pharmacies will start coming online, some Monday, more on Wednesday … We are going to have thousands of providers coming online next week," Cuomo said.

New York State United Teachers President Andy Pallotta called the expanded criteria "welcome news" and said his group has pushed for teachers and support staff to be given priority access.

Cuomo asked police departments, fire departments, labor unions and teachers unions to run their own vaccination programs when possible to ease the burden on other efforts.

About 479,000 New Yorkers have been vaccinated. That includes 79,000 in nursing homes, which are expected to complete their first round of vaccinations next week, state officials said.

Cuomo said Friday that 430,000 doses have still not been used.

A group of upstate county executives this week said the rocky rollout could be smoothed if Cuomo tapped into local health departments — which, by law, have emergency vaccine plans in place — instead of sticking with hospitals.

"Our hospital network was not set up for what’s going on here," Chemung County Executive Chris Moss said.

They urged Cuomo to let them "build a queue" of residents seeking vaccines that could be managed locally — not top-down, by the state.

"There’s no shortage of people who want the vaccine. Just open up the categories a bit," Orange County Executive Steven Neuhaus said.

Cuomo said that at the current rate of 300,000 doses a week arriving in New York, it would take the state 47 weeks to vaccinate 14 million of its population of nearly 20 million. That would represent 70% of the population, the bare minimum to achieve "herd immunity."

Cuomo: State 'in a danger zone'

Cuomo's expansion of the eligibility pool came as the state hit record levels of new daily infections this week, with virus-related hospitalizations climbing past 8,500 people on Thursday.

The spread in the New York was complicated by the emergence of a new and seemingly more contagious variant of the virus, which had gained ground in the United Kingdom.

The statewide figure of 18,832 new positives on Thursday surpassed the state's high of 17,636 from Wednesday test results. Long Island had 3,647 cases, slightly down from its infection peak.

The number of people hospitalized statewide with the virus increased by 13, to 8,561, with 161 lives lost Thursday of causes linked to the virus.

On Long Island, about 427,000 people will qualify in that phase.

WHO CAN GET COVID-19 VACCINES

New York State announced it is expanding its vaccination program to include essential workers and people over 75 years of age, starting next week, but the supply of vaccines is limited, and it may take until mid-April to have enough to cover the people in the two phases. Gov. Andrew M. Cuomo said health care workers will remain the priority over others in the expanded list. People in the 1B phase may start making reservations as soon as Monday at locations to be listed on a state website.

Group in Phase 1A (already eligible)

About 479,000 state residents have been vaccinated in this group, out of a total of 2.1 million. In this group 430,000 doses remain unused. The state says it needs another million doses.

Group in Phase 1B (newly eligible)

About 3.2 million state residents are expected to become eligible Monday to be vaccinated in this group.

State figures: Long Island hits new post-holiday peak of COVID-19 casesNassau and Suffolk have more than 3,800 confirmed new cases in a day. The state also saw its numbers of confirmed cases spike to more than 17,000 people testing positive, sparking new concerns about hospitalization needs. See the latest news on the coronavirus, vaccinesKeep up to date with the latest on the global coronavirus outbreak. Sign up for COVID-19 text alerts See what percentage of people around you are fully vaccinatedSee vaccination rates by ZIP code, and more COVID-19 data.