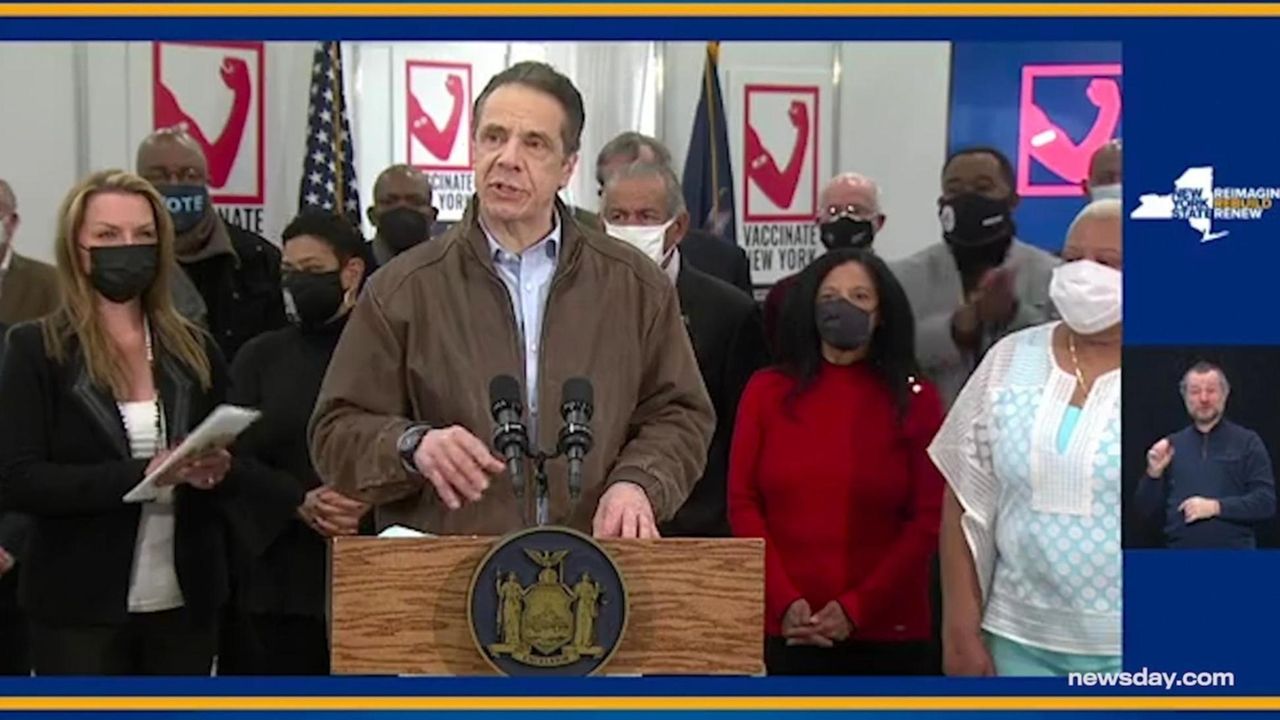 Gov. Andrew M. Cuomo said Monday he will get the Johnson & Johnson vaccine in a Black community to raise awareness that the vaccine is safe. Credit: NY Governor's Office

Three mass vaccination sites are set to open Friday on Long Island, including one at SUNY Old Westbury where Gov. Andrew M. Cuomo joined with Black community leaders on Monday to urge people to take the shots he calls "the weapon that will win the war" against COVID-19.

The Old Westbury site, along with others at the Southampton campus of Stony Brook University and the Brentwood campus of Suffolk County Community College, will operate from 8 a.m. to 7 p.m. They will start taking appointments Wednesday at 8 a.m.

"We're committed to quickly expanding the state's vaccine distribution network to get shots in arms as quickly and efficiently as possible, and these three sites will help Long Islanders access the vaccine and gain some peace of mind as we continue battling the pandemic," Cuomo said.

Each of the new sites should be able to administer about 1,000 shots a day, said Jack Sterne, a spokesman for Cuomo, potentially giving many more Long Islanders access to the vaccine if the supply grows.

Also on Wednesday, public-facing essential workers become eligible to sign up to get a vaccine, Cuomo added. And between Monday and Wednesday, priority is being given to the age-based group that was recently expanded — people 60 and over.

Cuomo last week announced he was dropping the threshold for eligibility from 65 to 60.

He said a total of 15 million people in the state are made eligible under the new rules for the vaccine, out of a total population of about 19.5 million.

He reminded the public that despite all the work that has gone into gearing up the state's vaccination program, only 2.3 million people so far are fully vaccinated, though another 4.5 million have gotten at least one dose.

The Pfizer-BioNTech and Moderna vaccines require two doses at specific intervals, while the Johnson & Johnson shot is completed with one dose.

Cuomo getting the shot 'in coming days'

Cuomo said he himself plans to get the shot "in coming days," probably at a pop-up site at a church in a Black community to encourage people to get vaccinated and to underscore his belief that the Johnson & Johnson vaccine is safe.

The state has set up 120 temporary pop-up sites throughout New York so far in vulnerable or underserved communities, he said.

Cuomo noted that vaccination rates are far lower in Black and Latino communities on Long Island than they are in the white population — and said he is deeply concerned about that.

"Get the vaccine!" he implored.

His appearance at SUNY Old Westbury stressed that message, since the college has historically served minority communities.

State Health Commissioner Howard Zucker commended Long Island for its efforts to quickly get as many people vaccinated as possible.

"Long Island has done a great job on the vaccination front," Zucker said. "The tremendous success we've seen here in Nassau County, where more than a quarter of the population has gotten at least one shot, is a model for the rest of the state."

That has happened partly because of the mass vaccination site at Jones Beach, state-run pop-up sites elsewhere and other efforts, he said.

At least one pharmacist on Monday said he received far fewer doses from the state after a recent surge of supplies.

Tom D'Angelo, who runs home infusion pharmacy Americare in Garden City South, said he received 100 doses for the week, down from 1,500 in each of the last two weeks.

"The inconsistent supply is creating logistical havoc," he said. "We are going to have to tell people we don't have the vaccine, and it's going to make us look like the bad guys. But it's not us. The inconsistency is a real problem."

D'Angelo added that because pharmacies are being asked to focus, in large part, on older people, they are helping customers who can't easily make appointments at state sites and are "who are at high risk."

Cuomo has said the state needs a far larger supply from the federal government to rapidly inoculate the vast majority. He has said he expects deliveries to remain flat through this week, but to increase sharply later.

Statewide, 58 people died Sunday of causes linked to the virus, including one in Nassau and four in Suffolk.

Pastor: 'A trying year' for many

At the Old Westbury event, Bishop Lionel Harvey of the First Baptist Cathedral of Westbury was among Black leaders who urged people in minority communities to get vaccinated against the virus.

"It has been arduous and a long and a trying year, but the reality is we can feel a new season that is coming," he said. "If we do the things that are right, it’s going to be a blessing to so many" that will lead to "a season when we are safe from this dreaded COVID-19 virus."

He added that "Black and brown communities" were "hit hard" and need to get vaccinated. "I stood in front of so many caskets during this season."

Timothy E. Sams, president of SUNY Old Westbury, said in a statement that the new site "is very good for our college, and for our surrounding community. There is no such thing as doing too much in our effort to beat COVID-19."

Cuomo also announced that the Bethpage Air Show, will return to Jones Beach this Memorial Day weekend. It was canceled last year due to the pandemic.

Kristen Jarnagin, president and CEO of Discover Long Island, said the pandemic has been "devastating" to the region's tourism industry, with Long Island losing about 30,000 of the industry's 100,000 jobs.

The governor's visit to Long Island was closed to the media "due to COVID restrictions" but was livestreamed. Cuomo has made several such appearances recently while facing calls for his resignation over allegations of sexual harassment.

How to get a COVID-19 vaccine appointmentFor Long Islanders still looking to get a COVID-19 vaccine, these resources might help. See what percentage of people around you are fully vaccinatedSee vaccination rates by ZIP code, and more COVID-19 data. Sign up for COVID-19 text alerts See latest news on the coronavirus, vaccinesStay up to date with the latest on the pandemic.