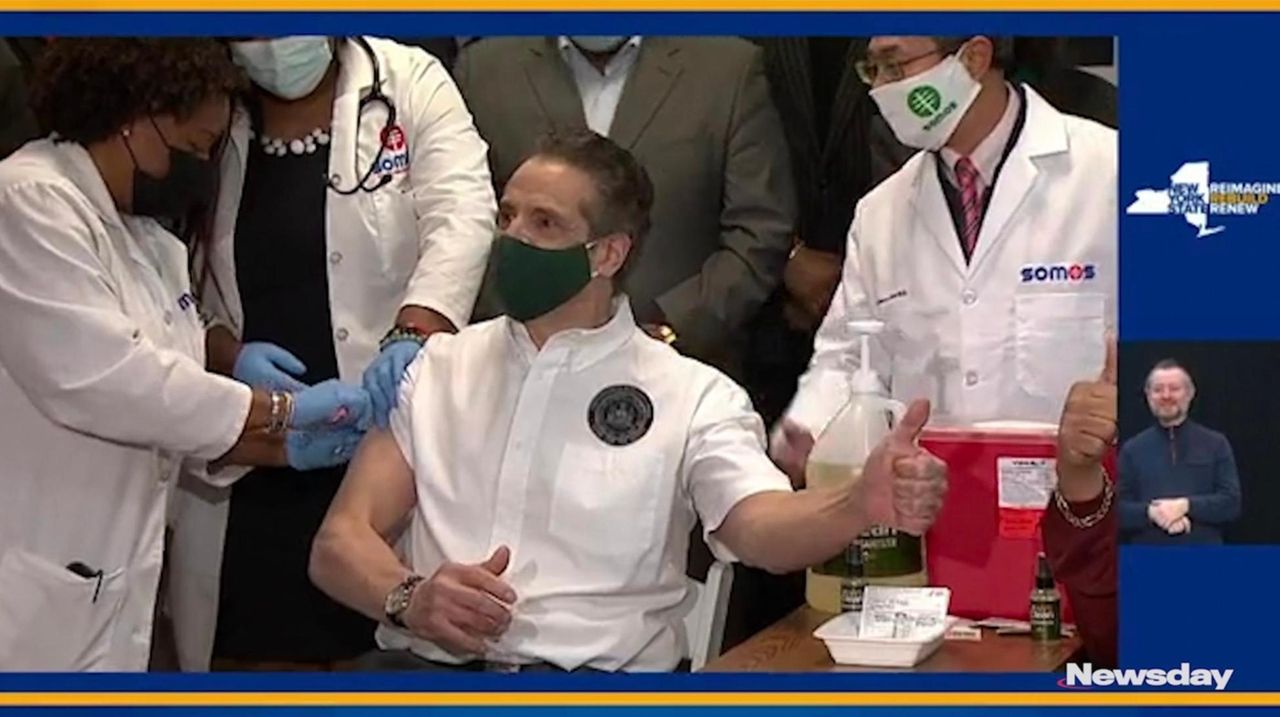 This story was reported by Rachelle Blidner, Candice Ferrette, Bart Jones and Jean-Paul Salamanca. It was written by Jones.

Surrounded by community leaders in Harlem, Gov. Andrew M. Cuomo got the vaccine for COVID-19 on Wednesday, months after he started urging New Yorkers to take it to curtail spread of the coronavirus.

Cuomo said he chose the historically Black neighborhood in Manhattan to send the message to the Black and Hispanic communities that have been hard-hit by the pandemic that they should overcome any hesitancy and get the vaccine. Cuomo last week became eligible for a shot after he dropped the threshold statewide from 65 to 60 years of age.

"Today I am going to take the vaccine," Cuomo announced to claps from pastors, politicians and community leaders gathered at Mount Neboh Baptist Church.

He said he opted to receive the one-dose shot of the Johnson & Johnson vaccine, the latest option in the country’s vaccine arsenal, "because I want to make the point, ‘Take whatever vaccine you can take. … Don’t try to pick one over the other.’ "

During an afternoon telephone briefing, Cuomo said the state is lifting restrictions for gatherings, business activities and schools that had been imposed by zone in neighborhoods with a high level of spread. Those neighborhoods, including Kew Gardens and Forest Hills in Queens that had been deemed "yellow zones," will now be subject to the more relaxed rules that were in place elsewhere in the state.

Starting Monday, gyms primarily in New York City will be able to return to indoor-fitness classes, Cuomo said. The classes had been forbidden even as those establishments reopened. They will have to operate at 33% capacity, require sign-in for contact-tracing purposes and clean and disinfect between sessions.

Starting April 5, the state is ending an 11 p.m. curfew for casinos, theaters, bowling alleys and fitness centers, but the cutoff will "for the time being" remain in place for food establishments and bars.

Meanwhile, Nassau County Executive Laura Curran announced that a mass vaccination site will open at Nassau Coliseum on Tuesday. "I am pushing the team to get this done and they assure me that Tuesday will be the day that it will open," she said.

'It’s safe enough for all of us'

Cuomo's turn to get the shot arrived as he has become the target of investigations and calls to resign over sexual harassment allegations and his administration’s handling of information about nursing home deaths from the virus.

He has continued to hold livestreamed events regarding the virus response, though several have been closed to the news media. Speakers at the 80-minute event praised Cuomo's leadership.

Rev. Johnnie Melvin Green Jr., senior pastor at Mount Neboh, was among those who hailed Cuomo’s push for vaccinations in underserved communities.

The effort to open pop-up sites to give more Blacks and Latinos a chance to be vaccinated "could be considered an act of social justice," Green said.

Green's church will serve as a temporary "pop-up" vaccination site Thursday and Friday.

"We are making sure that communities of color who are most affected by COVID-19 have access to the vaccine that will finally keep us safe," Green said. "This church … has lost too many of our members" to the virus. "This community has lost too many of our brothers and sisters. It hits us hard, fast, and is still a threat to us. With the vaccine, we can finally protect ourselves and each other."

Cuomo got his shot while being cheered and playfully taunted by participants in the church event, which included a birthday cake celebration for Hazel Dukes, head of the NAACP in New York.

Cuomo noted that Black people have died of COVID-19 at twice the rate of whites, and that Hispanics have died at 1.5 times the rate of whites. He said this was due partly to inherent injustices in health care systems and society in general and that "now we have to correct for that."

More than 7 million doses of vaccine have been administered in New York to date, which Cuomo said indicates to skeptics that "nobody is asking you to go first."

About 2.4 million New Yorkers have completed their COVID-19 inoculation, either by taking the two doses of the Pfizer-BioNTech or Moderna shots or by receiving the one dose of Johnson & Johnson, the state reported.

New York recorded 54 deaths Tuesday linked to the coronavirus, including six each in Nassau and Suffolk counties.

The sites will start operating under state control on Friday, from 8 a.m. to 7 p.m. daily. Officials expect to administer at least 1,000 shots a day at each location.

The Long Island sites will be at the Suffolk County Community College campus in Brentwood, the Stony Brook University campus in Southampton, and SUNY Old Westbury.

While Cuomo announced Friday that the state would launch a new vaccine site in Brentwood, the county had been running a site there since Jan. 6, and it has administered 31,000 doses there, said the office of Suffolk County Executive Steve Bellone.

The state will run it starting Friday. The county administered its final first doses there on Tuesday and will continue administering second doses at that location until April 6.

Speaking at the Yes We Can community center in New Cassel, Curran said Nassau County has launched a COVID-19 vaccine hotline, reachable at 516-227-9590, exclusively to assist seniors in making appointments. It will operate 9 a.m. to 4:45 p.m. Monday through Sunday.

"We have heard loud and clear from seniors and from the families of seniors who don’t have access to technology, don’t have the time to sit and refresh their browser all the time and who are having a very hard time making an appointment for a vaccine," Curran said.

As of Wednesday, 28.6% of Nassau residents and 22.7% of Suffolk residents had received at least one shot, according to the state.

Curran said the county is working to offer the vaccine to government, nonprofit and building workers such as concierges and door attendants in direct contact with the public, as they became eligible for the shots Wednesday.

She said she believed journalists and photographers should be eligible for the vaccine and has advocated their eligibility to the New York State Department of Health.

In Riverhead, Town Supervisor Yvette Aguiar announced Wednesday that an additional 300 COVID-19 vaccines will become available Friday and Saturday, for residents 60 and older only.

The vaccines will be distributed from 9 a.m. until 3 p.m. through the Riverhead Health Center at the Suffolk County Center. Residents who qualify can preregister at 631-727-3200 ext. 653 or ext. 290 or via the website at https://www.townofriverheadny.gov.

Aguiar said in a statement she would "continue to advocate" for vaccines for "senior citizens, the most vulnerable population afflicted by the COVID-19 virus."

How to get a COVID-19 vaccine appointmentWith limited supplies and constantly changing conditions, it can be difficult for Long Islanders to make an appointment for a vaccine. The resources here might help.  State: LI's COVID-19 positivity levels linger above infection lowsNassau County Executive Laura Curran said her administration is working to understand why the positivity rate has plateaued.

A third Pfizer shot? It's 'likely,' says CEO
1:35
For LI's vulnerable homeless population, a place to get vaccinated
Polls: Staffing, COVID precautions are hurdles to firms' growth
Should kids get a shot? Long Island parents differ on COVID-19 vaccine
1:55
This recession — aka 'she-cession' —  is hitting women especially hard
Island adds over 16,000 jobs in March, state data shows
Didn’t find what you were looking for?