Employees watch a race during the Belmont Stakes at Belmont Park in Elmont in June 2020. Credit: Newsday/Steve Pfost

Limited numbers of spectators will be able to watch horses race at Belmont and other racetracks in New York, as the state relaxes coronavirus restrictions starting next week in its gradual attempt to return to normal life.

Gov. Andrew M. Cuomo told reporters during a telephonic briefing Wednesday afternoon that the state will allow horse and auto racing, with capacity limited at 20% for outdoor events, "in line with our guidance for other events." His office later said the change will be in effect April 22.

Cuomo also announced that the curfew for food and beverage establishments will be moved from 11 p.m. to midnight effective April 19. The curfew for catered events will move from midnight to 1 a.m.

At the horse and auto racetracks, spectators will be required to wear face masks, socially distance, and show proof of full vaccination against COVID-19 or a recent negative test, he said. The same mandates are in place for other professional sports events where Cuomo also has started allowing spectators, including baseball, basketball and hockey.

On its website, the New York Racing Association, which runs Belmont Park, hailed the decision as a positive step "toward a return to normalcy."

The statement from NYRA CEO Dave O'Rourke said the association "looks forward to welcoming fans back to Belmont Park this spring and to Saratoga Race Course this summer." And he added: "We will announce ticketing options for fans once we further review the guidelines and protocols set forth for thoroughbred tracks in New York state."

Cuomo's order seemed to open the door to spectators returning to Riverhead Raceway, one of the oldest stock car racetracks in the nation. On its website, the racetrack said its opening night is May 1. 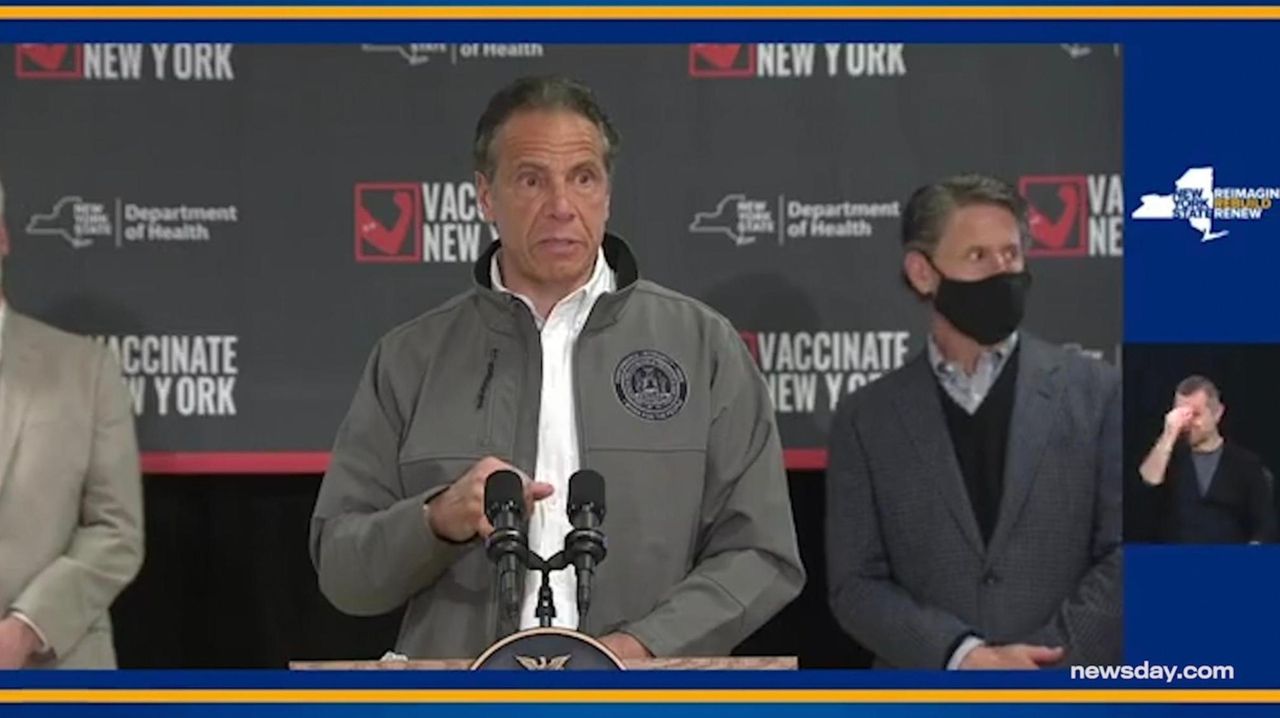 Cuomo gave a somewhat upbeat assessment of the fight to curb the virus, saying COVID-19 positivity levels are starting to show a decline in parts of the state.

He appeared at the site of the UBS Arena the day after two horses were killed and 58 were saved after a fire raced through the stables at a Belmont Park barn.

"Northwell is going to vaccinate the women and men who are building this complex, so we’ll build it and we can build it safely," he said.

The state has set aside 900 doses for the workers, with the first shots administered Wednesday, he said. Health care workers will administer 50 shots a day, six days a week to start.

Cuomo said the seven-day average for positivity in COVID-19 test results statewide Tuesday was 3.1%, the lowest level in the last month.

Long Island was tied with the Mid-Hudson region for the second-highest level in the state at 3.7% on the seven-day positivity rate. New York City's seven-day average was 3.3%, the lowest mark for the city in four months, Cuomo said. Western New York has the highest positivity level at 4.8%.

A total of 43 New Yorkers died Tuesday of causes related to the virus, he said.

At Belmont, the governor praised the new arena as one of the best in the United States, saying it will create $850 million in annual economic activity and 3,200 permanent jobs.

He said it will be ready before the end of the year and the new hockey season.

But he warned the COVID-19 pandemic is far from over.

"COVID is not gone," Cuomo said. "People die every day. Nurses, doctors put their lives on the line every day … Thousands of people go to the hospital every day because of COVID, still … You see countries around the world where you see COVID come back."

Cuomo was surrounded by local health care and building trades officials who lavishly praised his leadership during the pandemic. The event was closed to the media.

The governor has been under attack over allegations of sexual harassment from several women, including some who worked for his administration, and for allegedly withholding state data on nursing home deaths from the pandemic. Those in attendance focused on his performance through the health crisis.

"We were at war with an invisible enemy, an enemy we couldn’t see, couldn’t touch, couldn’t feel," said Michael J. Dowling, head of Northwell Health.

A day after the vaccine for Johnson & Johnson was put on pause over concerns about the a possible connection between the vaccines and blood clots, New York City Health Commissioner Dr. Dave Chokshi said "the vast majority" of appointments booked with the city government for Johnson & Johnson’s single shots were being honored at the original date and time — but with either the first of Pfizer-BioNTech’s or Moderna’s two-dose shots.

About 4,000 New Yorkers who were due to receive the Johnson & Johnson shot on Tuesday were being rescheduled for the other vaccine options later this week, Chokshi said, speaking at Mayor Bill de Blasio’s daily news conference.

Chokshi said the city’s month-old program to use the Johnson & Johnson shots to go door-to-door and vaccinate homebound New Yorkers is being suspended until at least Sunday — and the city is working to use taxis or ambulettes to transport would-be recipients to an in-person vaccine administration site.

De Blasio said he wants the federal government to figure out what’s needed to resume the use of Johnson & Johnson’s vaccine, "with whatever appropriate guidance is the best solution."

Cuomo to announce fans expected at Belmont this season See the percentage of LIers who are fully vaccinatedCheck the latest numbers on how coronavirus has spread in your community.