Gov. Andrew M. Cuomo’s office announced on Thursday that key coronavirus pandemic indicators in New York are at their lowest since late last year — though according to federal government data, the state is faring worse than most others.

In a news release, Cuomo’s office said the statewide positivity rate, averaged over seven days, was 3.05%, the lowest since Nov. 25, and that 46 people died on Wednesday from COVID-19. His office also said that hospitalizations were at 3,963, the lowest since December.

Other states and territories, however, are doing better, according to health statistics tracked by the federal government.

The U.S. Centers for Disease Control uses different metrics — which show that New York isn’t doing as well as other large states. The CDC statistics measure the COVID-19 infection rate per 100,000 of the general population, while the state's positivity rate captures the number of people who test positive out of the population tested.

Excluding New York City, which had a reported 250 cases per 100,000 people over seven days, the state overall had 230 cases per 100,000 as of Thursday. All but a half dozen or so states and territories have a lower case count, the CDC figures show.

And according to the latest statistics, updated Wednesday on the U.S. Department of Health and Human Services' website, New York has the nation's highest reported number of virus-related hospitalizations despite being the fourth most-populous state, with 4,743 adults who are hospitalized with confirmed or suspected COVID-19.

By comparison, the nation's most populous state, California, has 2,182 people hospitalized; Texas, the second most populous has 3,374; and the third biggest, Florida, has 3,762. 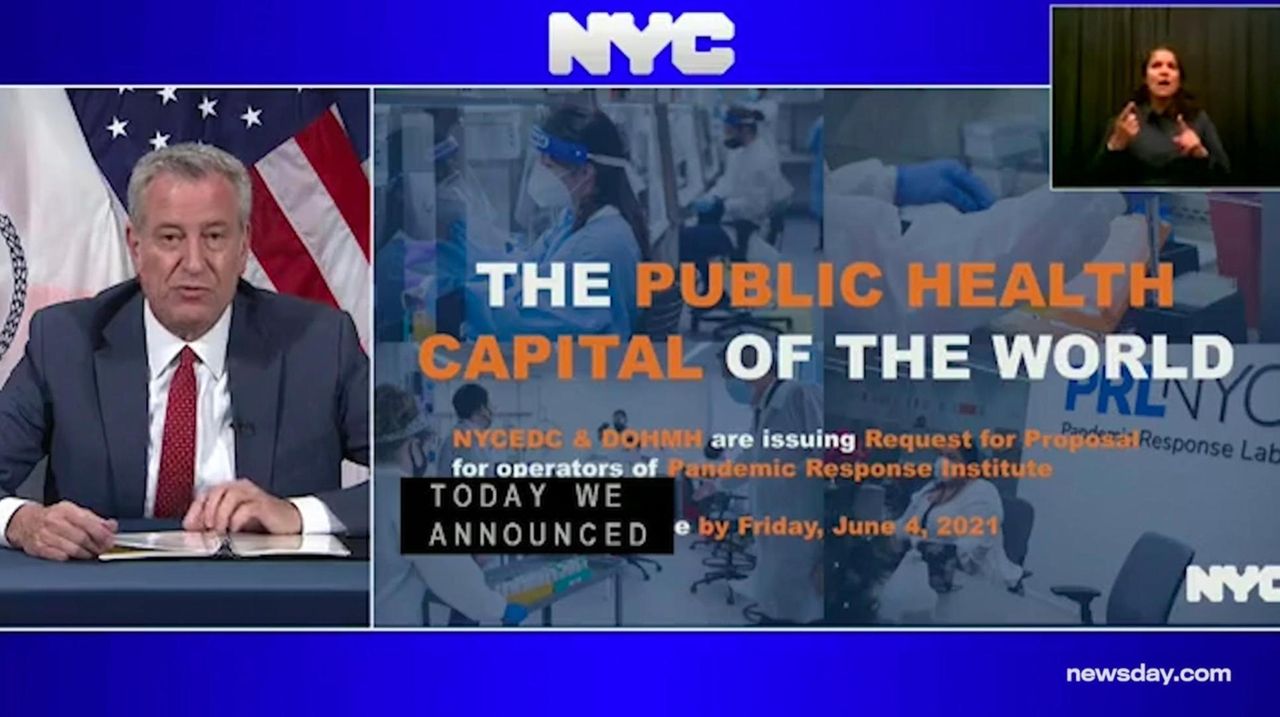 In June, Cuomo boasted that "we are controlling the virus better than any state in the country" and the state "went from worst to first."

Following a day when Cuomo said the state would relax rules for horse and auto racing, Nassau County Executive Laura Curran in a letter asked him to expand permitted capacity at the Nassau Coliseum to 50% by May 7. She said that since the state loosened rules to allow large arenas to reopen at 10% capacity in early February, more New Yorkers have been vaccinated.

In New York City, Health Commissioner Dr. Dave Chokshi said Thursday that the city is expecting to receive 10,000 to 20,000 additional first doses of the Pfizer-BioNTech and Moderna vaccines on top of the 210,000 first doses the city got this week.

The expected doses come after use of the Johnson & Johnson one-shot vaccine was suspended nationally while the federal government examines cases of a rare blood clot in connection to the shot. The Pfizer-BioNTech and Moderna vaccines require two doses, while Johnson & Johnson is administered in one shot.

His spokeswoman, Grace Kelly-McGovern, said the department hasn't yet started accepting walk-ins at the site, and the rollout date for them and the number of doses allocated wasn't available.

A day earlier, the county administered 614 first doses of the Pfizer vaccine in the new field tent, which is in the H. Lee Dennison Building’s south parking lot in Hauppauge, Pigott said.

The county would set aside a portion of doses there for walk-ins as a "saturation point" is being reached in which those who want shots have already received them or have appointments, Pigott said. More than 565,000 Suffolk residents, about 38% of the population, have received at least one dose.

"We're at the point where we used to post public links [for appointments] and they'd be snatched up in between five and 15 minutes," he said. "Now when we post the public links, it's taking longer than that. We've actually had a couple of pods at Riverhead that went mostly unfilled."

Pigott said the walk-in option aims to help seniors, many of whom had trouble navigating appointment portals online. He did not specify how many doses would be available for walk-ins or when walk-ins would be accepted.

Another mass vaccination site is inside the Dennison building, which is focusing on providing second doses of the Pfizer vaccine, he said.

How to get a COVID-19 vaccine appointmentWith limited supplies and constantly changing conditions, it can be difficult for Long Islanders to make an appointment for a vaccine. The resources here might help.  See the percentage of LIers who are fully vaccinatedCheck the latest numbers on how coronavirus has spread in your community. Sign up for COVID-19 text alerts See latest news on the coronavirus, vaccinesStay up to date with the latest on the pandemic.