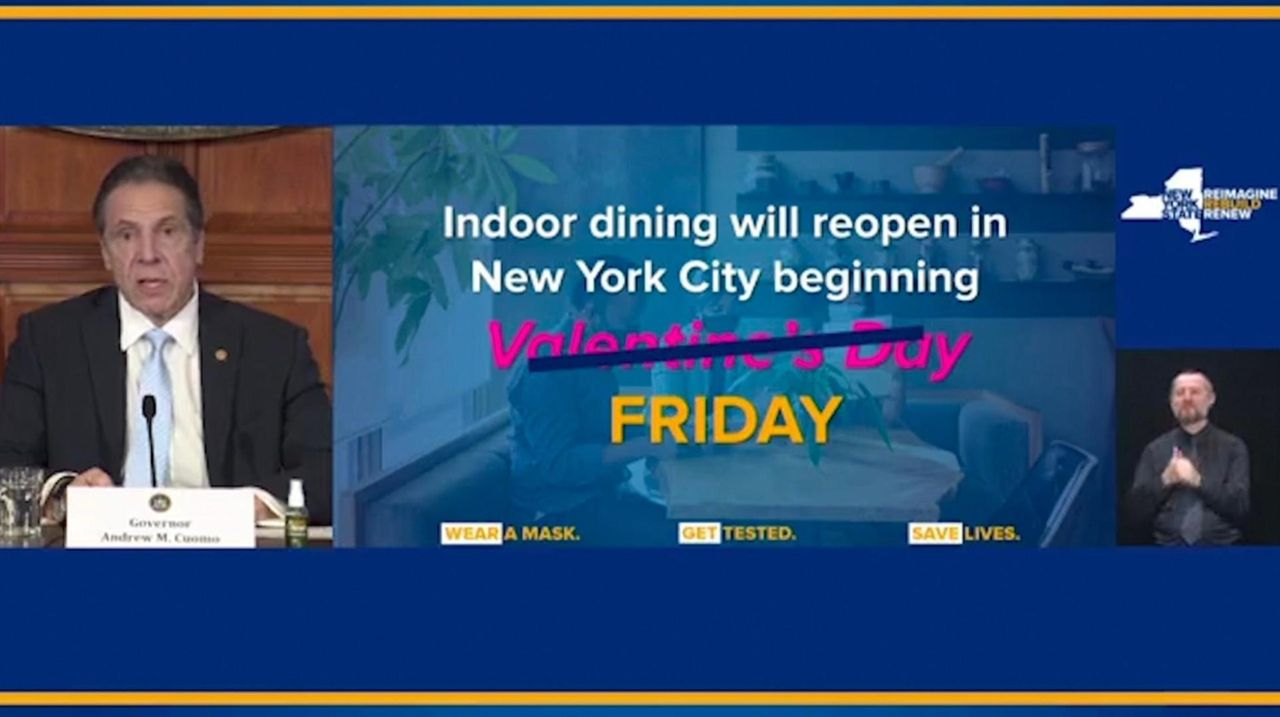 Gov. Andrew M. Cuomo announced Monday that New York City restaurants will be able to open at 25% capacity on Friday so those businesses can bring back staff and get their operations running for the big dining-out day on Valentine's Day. Credit: NY Governor's Office

A new city-run mass COVID-19 vaccination site will open Wednesday at Citi Field, prioritizing Queens residents, taxi drivers and food service workers, while the state is bracing for a crush of people newly eligible for shots who will be able to book appointments starting next week.

Gov. Andrew M. Cuomo announced that New York City restaurants can open at 25% capacity on Friday, allowing them to bring back staff and get geared up for Valentine's Day on Sunday.

He previously set the return of limited indoor dining to the city for Valentine's Day, but restaurant owners asked for extra time to get ready.

"We respond to the facts … They have made the point that they'd like to open a couple of days earlier so they can be ready for Valentine's Day," Cuomo said, " … and that's a reasonable request."

The state is launching a new program to accelerate the return of cultural events, which eventually could lead to the reopening of Broadway shows with limited audiences tested for COVID-19 ahead of time, Cuomo said.

A new group of state residents, made eligible for the vaccine because they are considered at high risk of severe illness from COVID-19, will be able to start making appointments for the state vaccination sites on Feb. 14, Cuomo said. Those appointments will open up at county-managed vaccination sites the following day.

The new group consists of people with health conditions, or comorbidities from a specified list issued by the state that includes ailments such as high blood pressure, diabetes, cancer and chronic kidney disease, which put them at increased risk of moderate, severe illness or death from COVID-19. Cuomo announced Friday that they can start getting vaccinations on Feb. 15.

But the process likely is not going to go without a hitch, as millions are added to the list of state residents qualifying for vaccines, even though the supply has increased only modestly over the last few weeks, and is far below what New York needs, Cuomo and his aides said.

"Ten million New Yorkers are chasing 300,000 vaccines every week," Cuomo said. "That’s what’s happening … This will be an ongoing tension until the supply is greatly increased, and dramatically increased."

Cuomo aide Melissa DeRosa warned state residents that they should seek the appointments with "eyes wide open," expecting difficulties in booking their spots.

Many Long Islanders say they are already frustrated, as signing up for an appointment has become a bewildering and usually unsuccessful odyssey.

The teenage Weinstein sisters of Roslyn, who have volunteered to help older vaccine-seekers navigate the bureaucracy to secure appointments, are struggling to find slots for those who signed up, said one of the sisters, Lily, 15.

As of late last week, she said, they had 429 people on their list. It took three days of calls, texts, and websites visits to find appointments for their own grandparents — a saga that led them to volunteer to try to help others.

Cuomo said officials will be on the lookout for people trying to commit fraud with the new group of eligible residents by falsely claiming they have severe underlying conditions. Doctors' notes and other documentation will be required, and those attempting to cheat will face repercussions, though he did not specify.

The new vaccination site in the New York Mets' baseball stadium will give preference to residents of Queens along with taxi drivers and food service workers, de Blasio said. It follows the opening of a similar site last week at Yankee Stadium, which is only for residents of the Bronx, a borough especially hard-hit by the pandemic.

Drivers eligible for shots at Citi Field must be licensed by the Taxi and Limousine Commission, regardless of where they live, the city said.

In an email, de Blasio spokeswoman Avery Cohen said the vaccine site will accept proof in the form of pay stubs or an employer letter, "and, if self employed or off the books [paid cash as bodega worker, unlicensed food cart worker, e.g.], they can self attest in writing."

Cuomo said the state will accelerate the reopening of cultural events with 300 "pop-up" entertainment events over the next 100 days throughout New York.

People attending the events will be tested beforehand for COVID-19 in a similar way that the state tested 7,000 fans allowed to watch a Buffalo Bills playoff game earlier this year.

The NY PopsUp events in local neighborhoods and other sites will not be "pre-scheduled" since the state does not want to attract large crowds, he said. The program "will make stages out of New York's existing landscapes, including iconic transit stations, parks, subway platforms, museums, skate parks, street corners, fire escapes, parking lots, storefronts, and upstate venues, transforming everyday commutes, local communities, and locations never used for performances into canvases of awe and exhilaration," Cuomo said in a statement.

Eventually, state officials hope to have the events "migrate" to indoor-established venues such as the Apollo Theater, the Harlem Stage, and The Shed.

The first event will take place Feb. 20. All performances will be free and open to the public, though in limited numbers. Performers throughout the program will include Renee Fleming, Alec Baldwin, Chris Rock, Patti Smith and Matthew Broderick, among others.

Asked if the plan would eventually lead to a reopening of the Broadway Theater District, Cuomo indicated it would. He said, for instance, that perhaps 150 people could attend a Broadway show after all had been tested.

"That is where we are headed," Cuomo said.

He noted that the state is now permitting weddings with up to 150 people to be held in catering halls, so 150 people in a theater — while socially distancing and wearing masks in a properly ventilated venue — is feasible.

The pandemic virtually shut down theaters and other cultural events, Cuomo said. "We now have to nurture that industry to bring it back. And again, it is vital for our cities to survive."

Cuomo repeated Monday what has become his refrain — "Long Island, Long Island, Long Island …" — as he pointed to higher levels of hospitalization and virus positivity in Nassau and Suffolk counties. The seven-day average on Long Island was 5.47%, which is the highest in the state, though — as Cuomo noted — the level here and throughout the state has been declining after a holiday spike.

The statewide daily positivity level in test results from Sunday was 4.28%. The number of new confirmed cases was 664 in Nassau, 696 in Suffolk, and 4,547 in New York City.

Statewide, 114 people died of COVID-19-related causes on Sunday, including 12 in Nassau and 6 in Suffolk.

The number of people hospitalized because of the virus increased by 67, to 7,716.

Northwell's peak was 3,400 in early April, while it had nearly 1,400 in January, after the holiday season.

Middle school educators also will be prioritized for vaccination in the run-up to opening.

Michael Mulgrew, president of the United Federation of Teachers in the New York City schools, said the return is tied to COVID-19 testing requirements and other preventive measures.

"Under the terms of its agreement with the state, the city has the right to reopen more schools when it has built enough capacity to maintain its strict in-school coronavirus testing standard," Mulgrew said in a statement. " … The UFT will be monitoring to ensure that the testing regimen, the presence of personal protective equipment and social distancing requirements are strictly adhered to as new grades and buildings reopen."

New York Gov. Andrew M. Cuomo announced on Feb. 5 that the state will add people at risk of severe coronavirus illness due to underlying conditions or comorbidities to the eligibility phases for vaccination. Starting on Feb. 15, adults of any age facing increased risk due to the following conditions will be able to get the COVID-19 vaccine:

Other eligible population groups can be found in the state’s phased distribution guidelines.

Experts: Young children won't get COVID-19 vaccines until 2022Pediatricians disagree on whether clinical trials involving children should have begun earlier, but they concur that vaccinations would help protect both them and adults in their household. Watch: LI's doctors, teachers and more talk about COVID-19's impact on your life See the latest news on the coronavirus, vaccinesKeep up to date with the latest on the global coronavirus outbreak.

1:50
Can you ask someone if they're vaccinated without sounding judgmental?
What should I know about the delta variant?
29:22
Zero mortality for fully vaccinated Long Islanders
Encouraging COVID shots can be tricky for employers
Suffolk sees lowest number of COVID-19 positives since pandemic's start
Biden pushes shots for young adults as variant concern grows
Didn’t find what you were looking for?