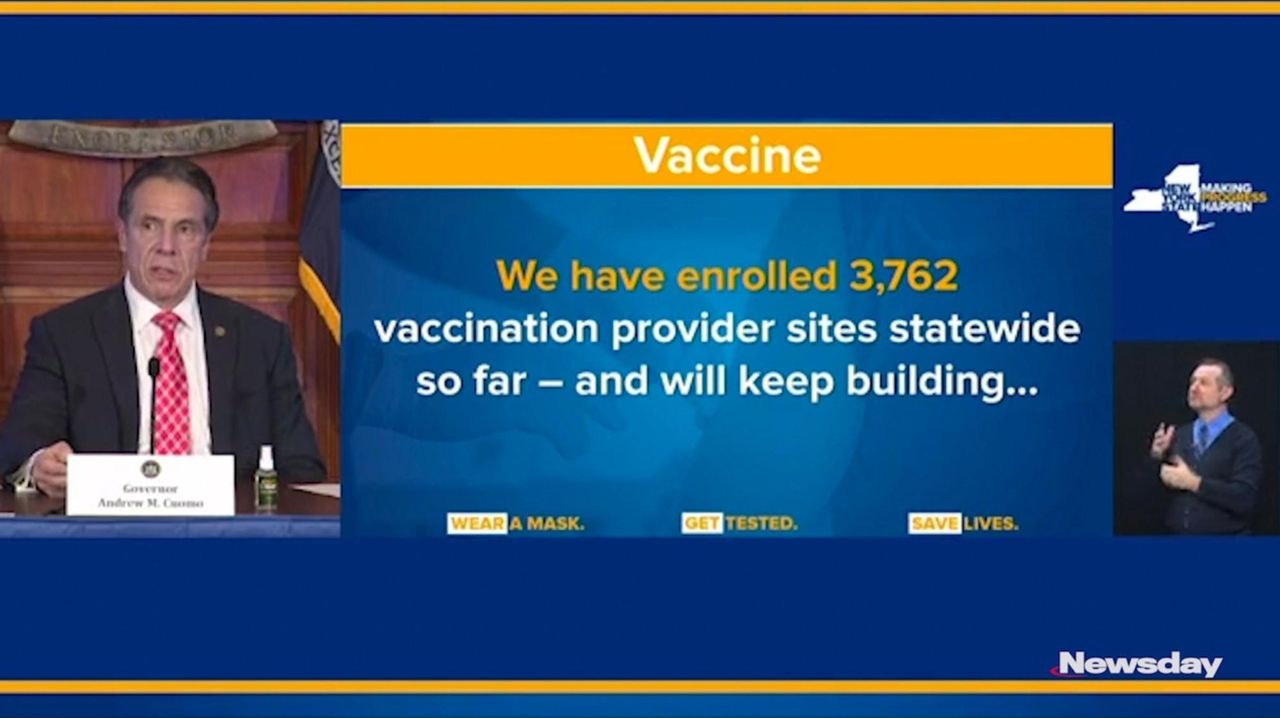 On Tuesday, Gov.  Andrew M. Cuomo said New York had set up a of non-hospital providers to give the COVID-19 vaccines that had already enrolled 3,762 establishments, including pharmacies, urgent care clinics, private doctors' offices and county and federal facilities. Credit: NY Governor's Office

This story was reported by Matthew Chayes, Candice Ferrette, Bart Jones, David Olson, David Reich-Hale and Joie Tyrrell. It was written by Jones.

New York is receiving only 300,000 doses of COVID-19 vaccine a week from the federal government, and has vaccinated a sliver of the 2.1 million health care workers in the state, Gov. Andrew M. Cuomo said Tuesday as he announced stepped-up efforts to expand distribution.

The more than 3,700 establishments that will start administering the vaccine can do so initially only for health care workers — and it may be weeks or months before there will be enough doses for other population groups.

Cuomo pleaded with the federal government to speed up deliveries, either with more doses from Pfizer or Moderna, or by approving vaccines developed by Johnson & Johnson or Oxford-AstraZeneca.

At the current pace, he said it will take weeks more to get to the next eligible group: about 2.5 million people, including essential workers and anyone over 75 years of age. 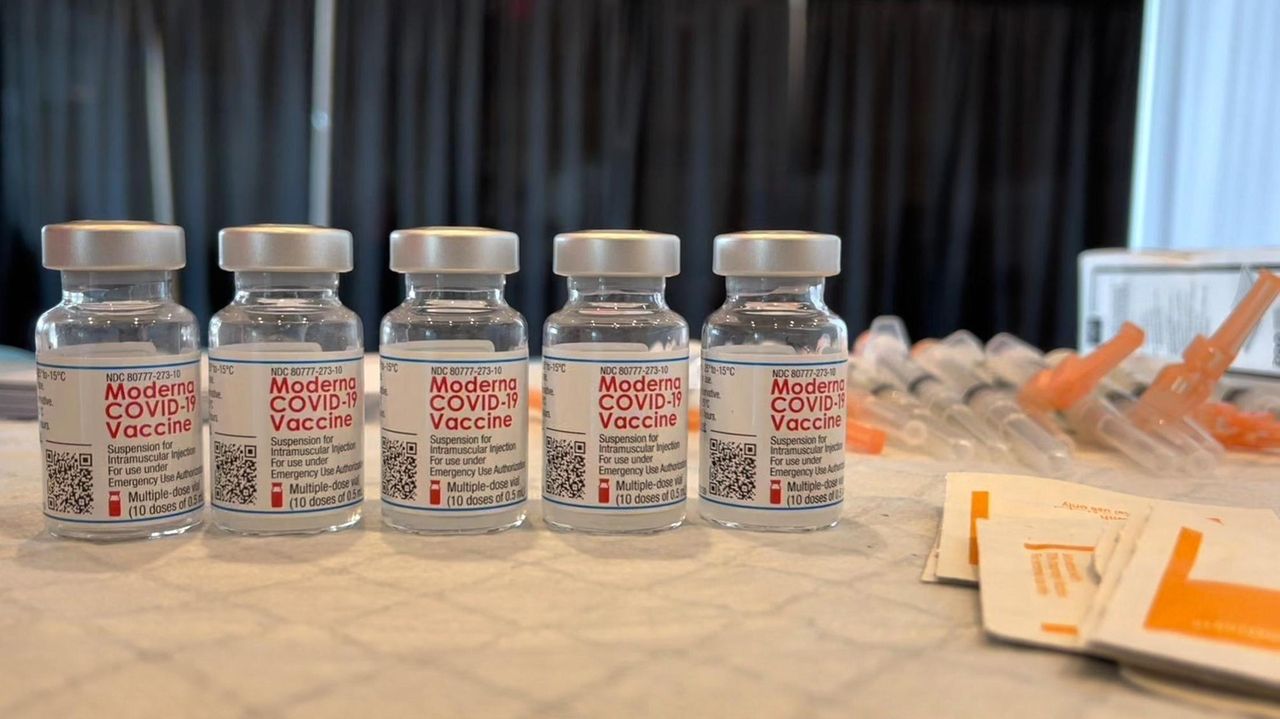 By the end of this week, the state will have distributed about 911,000 first doses of the vaccine for eligible New Yorkers, including health care workers and nursing home workers and staff, the state said.

The U.S. Centers for Disease Control and Prevention put the number of New Yorkers who had been injected with the first dose at 299,428 as of Tuesday morning.

It could take months until the vaccines are sufficient to supply the effort for the next group, and even more time until the majority of the state's nearly 20 million residents become eligible.

The governor said the state is expanding its distribution network beyond the hospitals to give the COVID-19 vaccines, and has enrolled 3,762 establishments. They include pharmacies, urgent care clinics, private doctors' offices and county and federal facilities, he said.

Among those providers are 713 on Long Island and 845 in New York City.

A total of 636 of the sites statewide already are operational and have vaccines, including 105 in Nassau and Suffolk counties and 207 in New York City. Health care workers can either go to hospitals or one of the sites for their shots.

The network will be critical if and when the supply of vaccines increases so they can be distributed rapidly, he added. Cuomo noted that the vaccines will be free.

New York registered an overall positivity rate of 8.3% from test results on Monday, with the number of virus patients growing by 339 from the previous day for a total of 8,590 in the state's hospitals. The state also reported 149 deaths linked to the virus.

Asking for help on vaccinations

Cuomo asked police and fire departments statewide, along with other groups such as teachers unions and transit workers unions, to set up their own vaccination systems, if possible, using workers they already have who are qualified to do the injections.

That would take some of the burden off the hospitals and the "retail" network, he said.

The state is also setting up large sites to administer the vaccines in the same way it established locations to do large-scale testing for COVID-19, he said. On Long Island such testing sites are located at Stony Brook University and Jones Beach.

The "drive-thru" vaccination sites will include the Javits Center in Manhattan and SUNY and CUNY schools, he said.

"The distribution system I am outlining can deliver millions of doses," he said.

The state will also open "pop-up" sites at churches, community centers and pharmacies in low-income Black and Latino neighborhoods to ensure underprivileged populations have equal access to the vaccine, Cuomo said.

He added that he will not receive a vaccine until people in those neighborhoods also can.

Cuomo on Monday criticized some hospitals for administering the vaccine slowly, including Nassau University Medical Center. He said the East Meadow hospital had used only 19% of its allotment, though hospital officials contended the figure was 34%.

Nassau County Executive Laura Curran on Tuesday, during a briefing at a state-designated vaccination site at Nassau Community College, added that NUMC officials "assure me that they are fully ramping it up and increasing distribution this week."

Cuomo said hospitals made inaccurate statements in defending themselves from his assertions. The data the state Department of Health used to rank hospitals on the percent of allotted vaccines they had administered was based on the first two weeks of allotments, not more recent ones, Cuomo said.

"So they were slow in distributing older allocations," he said.

Curran addressed a letter to Cuomo on Tuesday calling on the state to immediately expand the group of people eligible for the vaccine to include "law enforcement officers, corrections officers, firefighters, ambulance personnel and other similar first responders" not currently covered in the state's priorities.

"My goal is to get as many residents vaccinated as quickly as possible," Curran said.

On Tuesday — the first day of the NCC vaccine site's opening — 115 vaccines were to be administered to those eligible in the first priority group, Curran said. Eventually she hopes 400 people a day will be vaccinated at NCC, seven days a week.

Curran called on all 11 hospitals in the county to "get those doses into the arms as safely and as quickly and as efficiently as possible."

"We are doing our part in Nassau County to get residents to roll up their sleeves," Curran said. "After weeks of asking New York State to give us vaccine — to give us the county to distribute — I am very happy to say that we finally have it."

Northwell Health, the largest health system in the state, reported 158 COVID-19 admissions over the last 24 hours, 84 of which were on Long Island.

Amid rising confirmed cases of COVID-19, some school districts including Sag Harbor and Sayville switched to remote learning this week.

"Multiple students, faculty, and staff have had to quarantine due to the increased prevalence of the virus in our school community," Sag Harbor Superintendent Jeff Nichols said in a statement on the district's website. "This proactive measure will better position our schools to reopen for in-person instruction in the near future."

Sayville Superintendent John Stimmel also said on the district’s website the school community had seen a "rise in numbers" over the holiday break. "It is our hope that switching to remote instruction during this critical time of the pandemic will better enable us to return to in-person instruction as quickly as possible," he said.

About 30% of eligible workers at city hospitals are turning down the vaccine, said Dr. Mitchell Katz, who’s in charge of those hospitals.

De Blasio also called for banning all travel from the United Kingdom to halt the spread of its new, potentially more infectious coronavirus variant.

"Let’s have a travel ban right now," he said. "Let’s shut down that danger right now."

The governor harshly criticized federal officials one day after New York announced it had detected its first instance of the COVID-19 linked to the United Kingdom.

"The numbers are frightening" on how much more transmittable the new variant can be, Cuomo said. "This UK strain changes the whole footrace … The rate of transmission goes way up … and it’s no longer the race that we’ve been running."

He criticized Health Secretary Alex Azar and CDC Director Robert Redfield for failing to place travel restrictions on the U.K. and other countries as the more contagious mutation of the virus spreads around the globe.

"It's time to become more competent," Cuomo said. "Why do we not have mandatory testing of everyone flying into this country? I mean, why not? Not a travel ban, just mandatory testing … just test all international travelers before entry … we are not going to allow you in until you take a test."

He said the federal government is failing to stop the virus from coming here from other countries. "What’s really infuriating, this is what happened to us last spring. Learn the lesson!"

The state is prioritizing available doses of the COVID-19 vaccines, with supplies of the Pfizer and Moderna doses arriving every week.

Answering your questions about COVID-19 testingNewsday addresses critical questions about getting tested for COVID-19 on Long Island. COVID vaccinations may bring normal summer, panel says"We will end this pandemic," Dr. Aaron Glatt, chair of infectious diseases and department of medicine at Mount Sinai South Nassau hospital, said.  "The only way you can get rid of a pandemic is by vaccines." See what percentage of people around you are fully vaccinatedSee vaccination rates by ZIP code, and more COVID-19 data. See the latest news on the coronavirus, vaccinesKeep up to date with the latest on the global coronavirus outbreak.