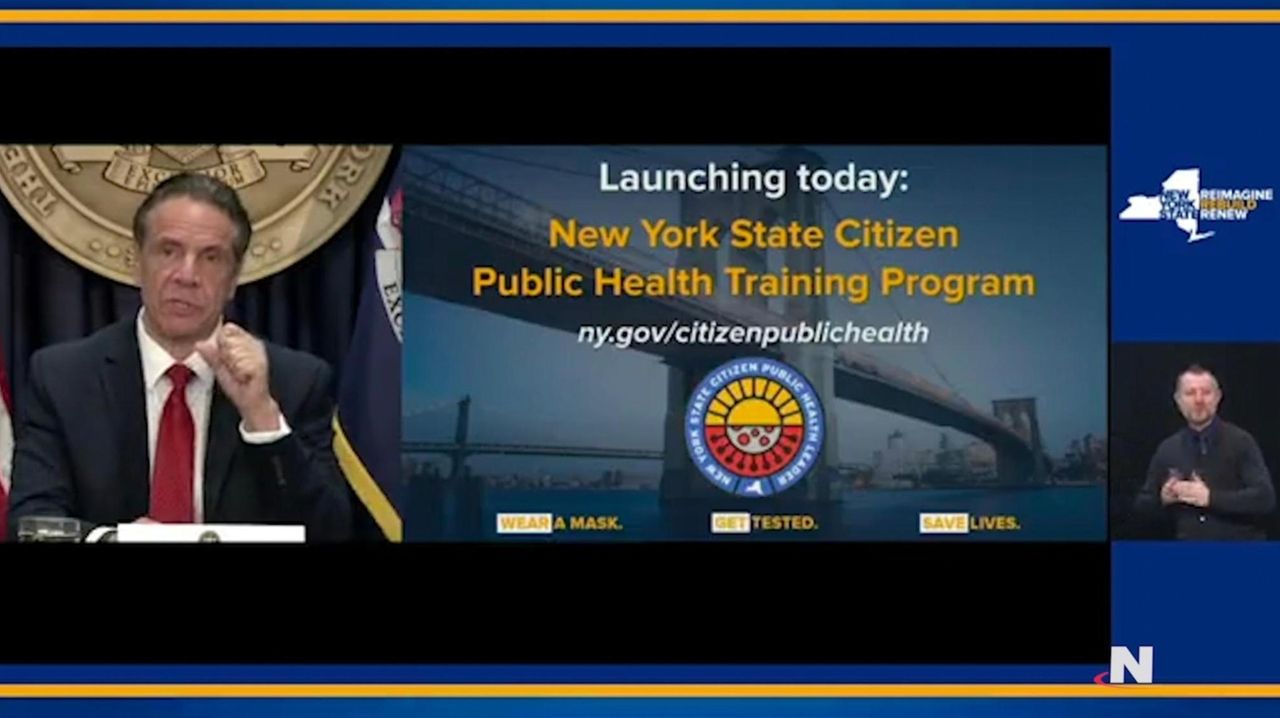 Gov. Andrew M. Cuomo on Wednesday announced a new “citizens public health leader” program, which would inform residents and prepare them to volunteer to help communities in the next pandemic. Credit: NY Governor's Office

The training program, featuring sessions with Cornell University and SUNY professors, is free, and online registration started Wednesday. The program starts April 30 and includes a 16-hour curriculum delivered in eight sessions, with a certificate granted.

Cuomo called the initiative the first of its kind in the United States. New York will make the program available to other states.

The program is needed, he said, because he is convinced another pandemic will strike — and the state needs to be better prepared than last year, when New York was so ill-situated he had to commission planes to fly to China to get personal protective equipment.

The governor showed a timeline of outbreaks that occurred before COVID-19, including the SARS and MERS coronaviruses in 2002 and 2012, to say that the warning signs were there about the impending threat from pathogens.

The training could lead to creating "a body of people who could volunteer to help in their community" when the next health crisis starts, Cuomo said.

The program was designed by professors at Cornell in upstate New York.

Dr. Lorin D. Warnick, dean of Veterinary Medicine at Cornell who helped create the program, said, "We at Cornell are really honored to be a part of this effort. It’s really exciting to see this being offered."

Cuomo predicted thousands of residents will enroll — he called them a "volunteer army" — and that by participating, it could help relieve the anxiety many people feel now and in a future pandemic by giving them more knowledge and control.

He noted that when COVID-19 broke out, most people had no idea what to do and how to handle it.

The program "will go a long way toward reducing the anxiety that people felt," he said during a livestreamed media briefing. "People felt out of control. We’ve been in a state of emotional trauma, of anxiety and a feeling of loss of control."

Bellone said the county hoped to vaccinate 600 people on Wednesday, but has the capacity to vaccinate up to 900 people a day if it gets the supply it needs.

He noted that the county’s positive rate has hovered around 4% for more than a month, even though he had hoped it would drop to 1% by this time.

"We have undoubtedly … hit a plateau," Bellone said during a news conference outside the building. "Until we get to herd immunity … there remains a real risk."

Judy Simon of Westhampton Beach was all smiles as she exited the vaccination center, located inside the government building.

She said she was "thrilled" when the state dropped the eligibility age to 50 earlier this week, and immediately went to the computer to find an appointment.

"I am turning 60 in May, so when they reduced the age to 60, I was two months shy and I was kicking myself for being young for the first time," she said.

Meanwhile, the state reported a 3.51% positivity rate out of 207,496 test results from Tuesday. The number of hospitalizations related to the virus decreased by 40 from the previous day to 4,641 across the state, with 71 state residents dying of coronavirus-related causes. Nassau and Suffolk counties each had five deaths.

"We have made tremendous progress, but anyone who says it's over is wrong," Cuomo said.

Long Island's positivity rate on a seven-day average was 4.38%, the highest among state regions. New York City's was 4.14%. The statewide average was 3.34%.

He again chided Long Island for its sustained and relatively high levels of positivity.

"Long Island had a high positivity rate for a period of time now," he said, adding that the Hudson Valley has also. "This makes the point again. It is up to us. It’s up to a community’s behavior. Why do you have the Southern Tier at point-six [.6] and Long Island at 4.3? Same state. Same weather. Same climate. Same basic demographics."

But he said the state is progressing overall. The statewide positivity level on a seven-day average was 7.94% on Jan. 4 amid a holiday season surge, and 3.34% on March 23, he said.

The number of new confirmed cases in test results from Tuesday was 603 in Nassau County, 665 in Suffolk County, and 3,809 in New York City.

New York State has continued to push its vaccination efforts, with more supply of shots delivered to pharmacies, county and state sites. Cuomo said he expects the delivery of dosages from the federal government to escalate rapidly, but this week deliveries of the Johnson & Johnson vaccine did not increase, apparently because of production delays.

In New York City, Mayor Bill de Blasio said he plans to expand an early childhood education program, despite questions about returning to classrooms amid the pandemic.

He said Wednesday that taxpayer-funded "3-K for All" classes will be expanded to be available free to all 3-year-olds starting in September.

"If you want to help a working family, give them free, early childhood education," de Blasio said.

Years ago, de Blasio announced a pilot for the program in several poor districts — including the South Bronx and Brownsville — and at the time promised the program would go citywide by the start of the 2021-22 school term.

The program is paid for by $300 million from the latest federal stimulus law, de Blasio spokeswoman Laura Feyer said.

With James Carbone and Matthew Chayes

Fauci: Decision likely Friday on resuming J&J vaccine
1:10
COVID-19 rate falls as eateries, bars to extend last calls
1:56
Experts: Prepare dogs, cats to be home alone when you go back to work
1:53
Staffing agency deploys medical workers in new workplaces
1:47
Differences in key COVID-19 statistics tracked to how agencies record them
NYC residents, workers 50 and older can now get COVID vaccine without appointment
Didn’t find what you were looking for?