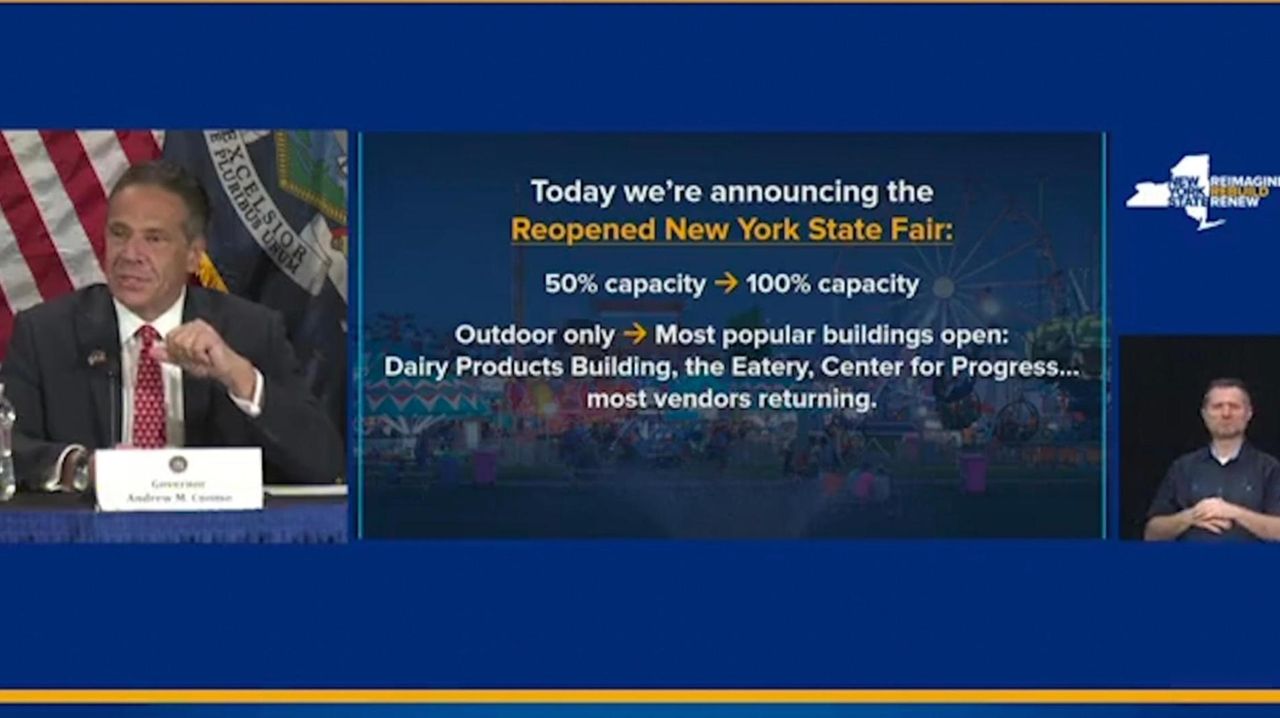 Gov. Andrew M. Cuomo on Monday announced that the New York State Fair, which had to be canceled in 2020 because of the coronavirus, will reopen in August “at 100 percent occupancy.” Credit: NY Governor's Office

New York on Monday reached the 70% threshold of adults 18 and older receiving at least one shot of the COVID-19 vaccine, according to the latest federal figures, hitting a benchmark that Gov. Andrew M. Cuomo said should lead to lessened coronavirus restrictions for social and business activity across the state.

Even so, the Long Island communities of Hempstead and Greenvale were listed among underperforming ZIP codes for giving the shots, according to state figures.

Hempstead has a COVID-19 vaccination rate of 27%, and Greenvale is at 34.6%, the state reported, even though 58% of all New York residents have received at least one dose by the state's count.

While the state and the Centers for Disease Control and Prevention report different percentages of vaccinations — because the national agency includes federally administered doses — a Monday afternoon update from the CDC put New York at 70%, with 10,802,759 having gotten one shot. That figure was still 67.4% by the state's latest vaccination report for 18 and older, issued late Monday morning.

Meanwhile, the two Long Island communities of Hempstead and Greenvale are among scores the state is targeting because they are lagging in vaccination levels — seen as an impediment to crushing the virus for good, Cuomo said.

The bottom 10% of ZIP codes for that metric have less than 38.8% of their residents vaccinated, well below the statewide average, he said.

"I want local governments to pay attention to these ZIP codes," he said. "Get in there. Go door to door. Go to churches. Go to social events. Go to community events. These are the places where we have to target to get that vaccination rate up."

Cuomo said Monday the state will publicly release the ZIP codes with low vaccination rates so local governments know "these are the target areas." He also said the state will work with local health officials to get more people vaccinated.

"With more than 77% of adults having received at least one dose of the vaccine, Nassau County is outpacing [the state] and the nation," she said in a statement. "Community outreach will continue across Nassau, as it has since the beginning of our vaccination program. These efforts are a key reason as to why a greater percentage of Black and Latino residents have been vaccinated in Nassau compared to New York State’s average."

A special effort will be made statewide to get 12- to 17-year-olds vaccinated, in part by offering incentives including a raffle for a four-year, full scholarship to public colleges, he added.

As of Monday, 77.2% of those 18 and older had gotten at least one dose of vaccine for COVID-19 in Nassau, according to state figures. The vaccination level for 18 and older was 69.6% in Suffolk County, according to the state's vaccine tracker.

Meanwhile, other COVID-19 trends were more encouraging. New York will have a full-fledged state fair this summer, Cuomo said Monday, as the state neared its vaccination milestone for first doses administered.

The COVID vaccination series is completed with one dose for people who receive the Johnson & Johnson shot, but requires two doses spread weeks apart for people who get the Pfizer-BioNTech or Moderna vaccines.

The New York State Fair, canceled in 2020 because of the pandemic, will reopen Aug. 20 at 100% capacity, Cuomo said at a livestreamed news conference in Syracuse.

The state is removing restrictions on the fair because "the facts changed" on the virus since April, when he had announced a limited reopening at 50% capacity, Cuomo said.

The fair typically attracts 1.3 million visitors from 28 states and six foreign countries, and generates $100 million a year in economic activity, Cuomo said. It is scheduled to run from Aug. 20 through Sept. 6.

He cast its reopening as part of a return to social life and economic activity in the state, which ranks among the lowest for virus positivity in the country after once being among the highest.

"There’s a lot of making up to do … we’ve been in isolation for too long," Cuomo said. "We are not meant to be in isolation. We are social beings."

Unvaccinated people will be asked to wear a mask at the fair, but it won't be mandatory, he said.

The state hovered around the 70% figure early Monday, as the state also saw continued declines in infections, hospitalizations and deaths from the virus.

"It means we are doing well, but it also means keep going," he said. " … It’s not the finish line at 70, but we are coming around the last turn on the track."

The state hitting 70%, he said, would be a "cause of celebration."

The most recent round of daily testing results yielded a positivity rate of 0.52% across the state on Sunday, with the net number of hospitalized virus patients decreasing by 13 people to 617, and continued reductions in the numbers of intensive care patients and intubations. Seven people died of virus-related causes in the state Sunday, including one in Nassau County.

The state continued to slide down from a high 7.94% positivity on a weekly average in early January to 0.41% for the last seven-day period — the lowest level so far for that metric through the pandemic.

The number of new confirmed cases in test results from Sunday was 23 in Nassau County, 19 in Suffolk County, and 156 in New York City.

With Scott Eidler and Michael Gormley

Do you need a mask? Here's a guide to policies at stores around LIWith the new CDC mask guidance in effect in New York, Newsday has compiled a list of mask policies at some of LI's largest retailers. See what percentage of people around you are fully vaccinatedSee vaccination rates by ZIP code, and more COVID-19 data. I got my COVID-19 vaccine — what can and can't I do?There are some clear guidelines from the CDC and other authorities on what you can and can't do now, but other decisions depend on your comfort level. Here's a guide for what to know. Here's why the state's COVID-19 infection rate has leveled off More New Yorkers are getting vaccinated, preventing the state's infection rate from rising significantly, but the continued spread of the virus among unvaccinated people is preventing it from falling, experts say.