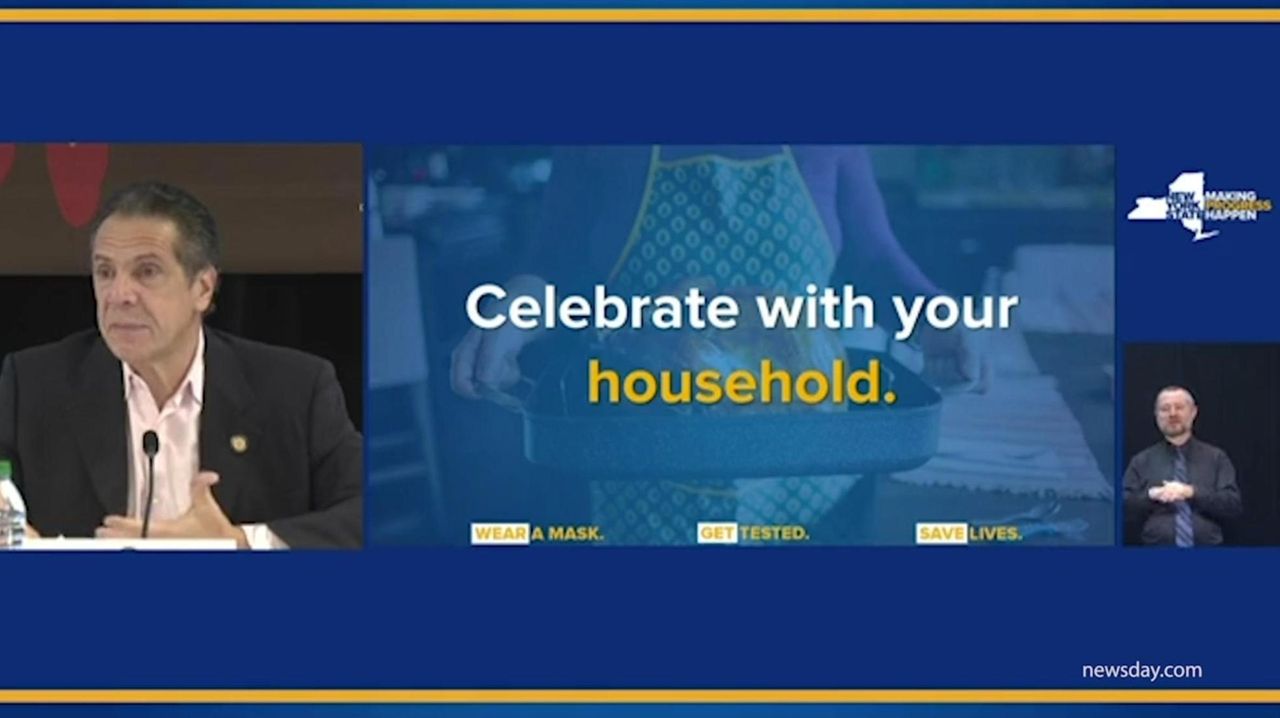 Long Island reported a level of new confirmed COVID-19 cases per day not seen since April, surpassing 1,000 cases on Tuesday amid a fall surge and before an expected spike brought on by the holiday season, officials said Wednesday.

Nassau reported 496 new cases and Suffolk reported 543 new cases from tests Tuesday, the most recent day available, after weeks of a gradual climb in new diagnoses.

In both counties, new cases had continued to drop through the summer, with each county registering fewer than 50 new cases on some days. 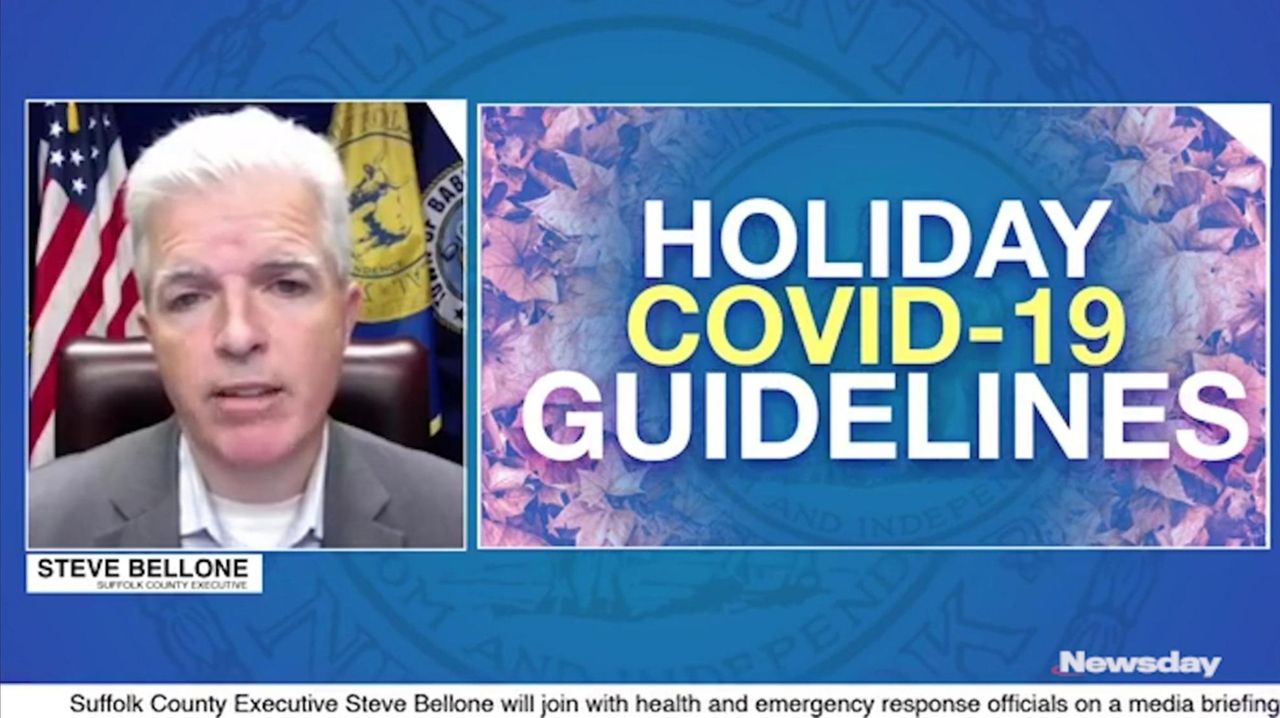 But the fall season, with its chillier weather drawing people to spend more time indoors, along with "coronavirus fatigue," as people tire of obeying social distancing and mask mandates, are said to be contributing to sending the numbers back up, according to officials.

Long Island's combined total of new cases from testing Tuesday was 1,039, a high not reached since the spring, reflecting the statewide trend. The state had more than 6,000 positives on Tuesday.

Suffolk's positivity level in the daily testing results was the highest since May, Suffolk Health Commissioner Gregson Pigott said.

Bellone asserted that county officials "have stepped up in every area where we need to get these numbers under control because so much is at stake here."

The new rise on Long Island comes as Gov. Andrew M. Cuomo voiced concerns about travel and family gatherings for Thanksgiving acting as "an added accelerant" to the spikes.

County Executive Laura Curran said that the 496 Nassau residents testing positive from 13,033 tests given in the last 24 hours brought the county's positivity rate up to 3.8% — "one of the highest rates we’ve seen since reopening."

Nassau’s hospital systems had 190 patients with COVID-19, including 35 in intensive care and 18 on ventilators, she said.

"I strongly encourage residents of all ages to exercise common sense this holiday weekend — especially college students eager to reunite with friends from their hometown," she said. "The last thing we want is for our businesses and schools to have to close. We all must continue to do our part."

Bellone called the figures in Suffolk "concerning" while noting they "may not seem as alarming as many other parts of the country."

"We know that with Thanksgiving tomorrow and with the upcoming holidays, that another surge in cases, beyond what we’ve already seen now, is virtually guaranteed," Bellone said.

States around the country, including New York, could end up setting up emergency field hospitals again like scenes from a "World War II movie" as COVID-19 cases surge, Cuomo said Wednesday.

"We have tremendous increases statewide" in COVID-19 cases, he said, and the upcoming holiday "is going to take a bad situation and make it worse."

The state has designated a growing number of communities as "microclusters" or "hot spots" in recent days, including four on Long Island named "yellow zones" this week: Great Neck, Massapequa Park, Hampton Bays and Riverhead.

The governor on Wednesday repeated his pleas for New Yorkers to stay home and socialize only with members of their households on Thanksgiving Day, with a limit of 10 people.

"Thanksgiving will be an added accelerant. Why? People travel," Cuomo said. "The airports are reporting travel that is way up and we are going to see an increase post-Thanksgiving" in the spread of the virus. "We expect that."

He said the state expects to see higher rates of coronavirus about 10 days after the holiday, accounting for a virus incubation period of seven to 10 days.

The state reported an overall positivity rate of 3.62% from test results Tuesday, including oversampling in the microcluster zones. The number of coronavirus patients in hospitals across New York grew by 126 from the previous day, up to 2,982. Forty-one people died of virus-related causes.

In urging New Yorkers to heed holiday warnings, Cuomo said figures from the U.S. Centers for Disease Control and Prevention indicate that 24% of people who spread COVID-19 never develop symptoms and 35% give the virus to others before they experience illness.

Cuomo noted that the call to limit Thanksgiving gatherings to immediate household members is a bipartisan plea — both the CDC under President Donald Trump's administration and President-elect Joe Biden's team have recommended it.

Suffolk County police will be out in "full force" to enforce gathering guidelines Wednesday night, typically one of the biggest party nights for young people, Bellone said. Police "will not be going door-to-door" but will respond to reported violations and may issue fines.

During a visit to Long Island on Tuesday, Cuomo discussed a rising level of daily patients at hospitals, shooting up by 149% over three weeks in Nassau and Suffolk counties. He said hospitals in the region were expected to be able to handle the influx of patients under assumptions of a 20% increase in cases, but would need to seek more emergency beds if that level was exceeded.

Cuomo echoed those concerns Wednesday. He said the state is going to take "a serious look at that hospitalization rate increase" to determine further steps.

Bellone announced new free testing sites. The county is partnering with Northwell Health and the Dolan Family Health Center to launch community testing in Huntington on Monday. Sun River Health will open a testing site in Patchogue on Tuesday.

The county initiated a free school testing program in those same school districts, Bellone said. Four of 417 tests in Hampton Bays were positive, and 12 of 524 in Riverhead were positive, he said.

"The only way to beat this virus is by acting proactively, and that’s exactly what we’re doing on all fronts, including when it comes to testing," he said.

The Suffolk Board of Elections had eight positive cases and 37 people are in quarantine after an employee recently tested positive, Bellone said.

People who visited Tellers Restaurant in Islip on Nov. 16 or 17 may have been exposed to COVID-19 after "more than one person connected with this venue" contracted the virus, the Suffolk health department said Wednesday. Officials urged people who have been potentially exposed to monitor themselves for symptoms for 14 days and to get tested.

In the Hicksville school district, Fork Lane School will follow a fully remote platform through Dec. 4 after someone tested positive for COVID-19, school officials said. Also, the Willet Avenue School in Hicksville is switching to remote instruction through Dec. 8 after a staff member tested positive, Nassau BOCES said.

These numbers represent the recent highs in cases per location for daily positives, and the last dates when the tests had yielded higher results.

LI hospitals seeing more COVID-19 patients, amid holiday concernsFollowing "yellow" zone designations on Long Island, other communities in Nassau and Suffolk could be "on the brink" of restrictions to curtail coronavirus spread.