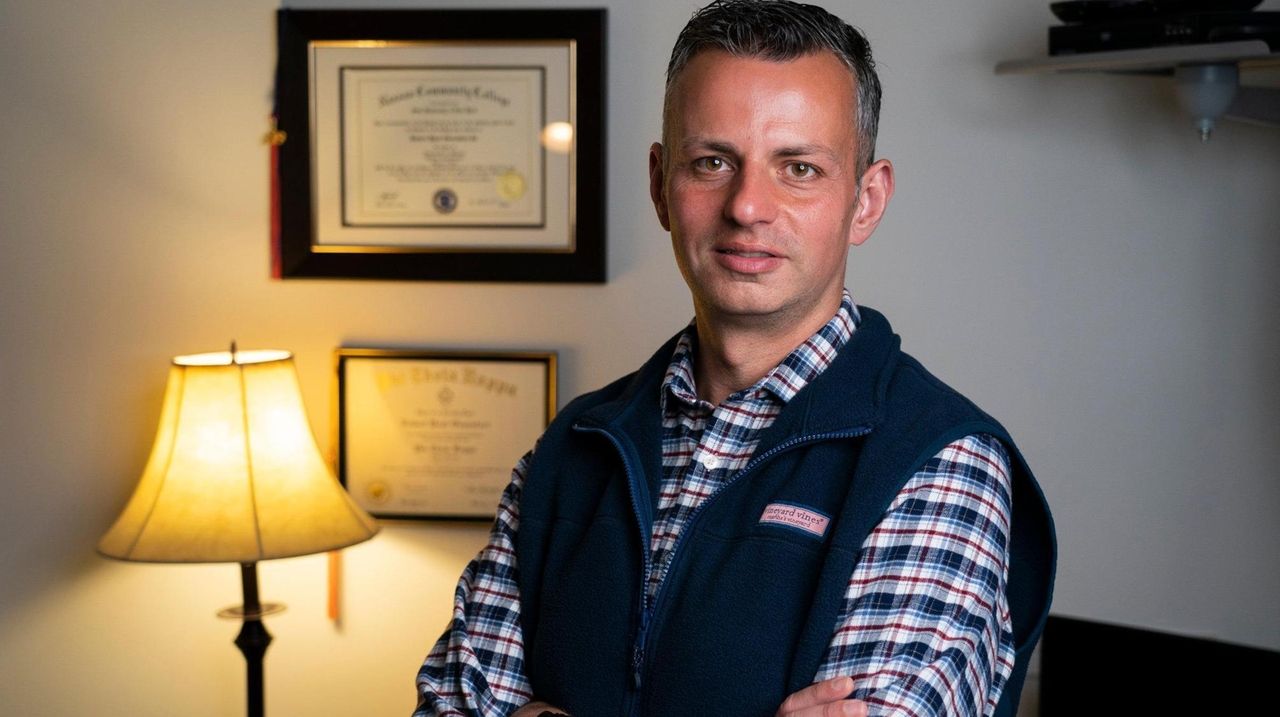 Anthony Santella, associate professor of public health at Hofstra University, explained why COVID-19 data discrepancies exist between state and city reports, which one is more accurate and why it's important to reconsider the way the public consumes data. Credit: Corey Sipkin

The state’s official COVID-19 death toll through Friday was 41,450. But the Johns Hopkins Coronavirus Resource Center, a well-respected source of worldwide coronavirus data, put the number at 51,537 — 24% higher. The state said the seven-day average of New York City residents who tested positive was 3.33% on Wednesday, but the city said it was 5.35% — 61% higher.

COVID-19 data can have real-world implications, in understanding the trajectory of the disease, in whether the public follows coronavirus-prevention measures and in whether COVID-19 restrictions should be relaxed or tightened, experts say.

That has led to lower pandemic numbers for Long Island and the rest of the state.

Numbers matter, because they affect how decisions are made and how the public acts, experts say.

"If a politician does not want to shut something down but wants to act is if they’re adhering to some kind of pre-specified metric, they might make the calculation harder to achieve, so they don’t have to deal with something they don’t want to deal with," he said. "This is why it matters how you define things."

For about a year, Gov. Andrew M. Cuomo had the power to tighten or relax restrictions statewide. The State Legislature last month limited his power, though Cuomo still has the authority to extend or ease restrictions he originally set.

State Health Department spokesman Jeffrey Hammond defended the state's methodology, which relies on different types and sources of positivity and death data than New York City and states such as New Jersey.

The approach has been consistent throughout the pandemic, he said in emails. The state has been "displaying an unprecedented amount of data in real time" and is focused on using that data for "real-time monitoring and response planning," he added.

If the state followed New York City’s method of counting, which Hofstra University professor Anthony Santella called "more robust and precise," Long Island’s positivity rates and death numbers would be higher, as would numbers statewide, potentially leading to more compliance with mask-wearing and other preventive measures, he said.

"If the numbers portrayed a more serious threat and more deadly consequences, that would certainly cause people to think twice about what they’re doing and maybe what they’re not doing," said Santella, an associate professor of public health.

"It’s a bit of an apples to oranges" comparison of positivity rates when states and cities compute them differently, said Jennifer Nuzzo, an associate professor of epidemiology at Johns Hopkins and the epidemiology lead for its coronavirus center.

The state’s fatality numbers are based on daily electronic reports from hospitals, nursing homes and adult care facilities, Hammond said.

"COVID-related fatalities occurring outside of those locations are not included in the data for public reporting," Hammond said.

He declined to say why the state does not report at-home deaths and whether they eventually would be added to the state total.

In addition, the state only includes "confirmed" COVID-19 deaths, not those "presumed" to be from COVID-19, he said.

"Presumed" COVID-19 deaths include those in which COVID-19 is listed on the death certificate but there is no positive PCR result.

New York City reports confirmed and presumed numbers separately. About 84% of deaths are confirmed. Johns Hopkins uses both in its total.

Santella said the state’s reliance on hospitals and nursing homes for data leaves "more room for error and bias," in part because data may not be complete.

He said a key reason for what he called the state’s "less valid and reliable" data collection may be that the city health department has far more epidemiologists and statisticians to analyze data than the state.

Nash said the state likely is undercounting deaths, but the city may be slightly overcounting them. That's because some people who tested positive within 60 days of death may have died of other causes, but, "death within 60 days of any event is a rare thing for most people, so my guess is we’re not talking about too many people."

The city and state likely missed some deaths early in the pandemic, when there was much less testing and some people who died at home from, for example, a stroke triggered by COVID-19 were not listed as coronavirus deaths, because it was unknown they were infected, he said.

Wafaa El-Sadr, a professor of epidemiology and medicine at the Columbia University Mailman School of Public Health, said the 60-day rule is "reasonable," especially because death certificates aren't always filled out completely, so if someone dies of COVID-19 complications, sometimes only the immediate cause of death may be noted, not COVID-19.

Like New York City, New Jersey reports confirmed and presumed deaths, with only those with positive PCR results within 30 days of death considered confirmed, along with those who die more than 30 days later if other criteria are met, such as COVID-19 appearing on the death certificate, said Dr. Edward Lifshitz, medical director of the New Jersey health department’s communicable disease service.

"The PCR test is basically the gold standard when we’re thinking about testing," said Stephanie Silvera, a professor of public health at Montclair State University in New Jersey. "The problem with those rapid tests is it’s possible to test negative even when you’re positive."

The false negativity rate for antigen tests is between 10% and 20%, compared with less than 1% for PCRs, said Jeff Engel, senior adviser to the Council of State and Territorial Epidemiologists and the former state epidemiologist for North Carolina.

The council recommends that states separate PCR and antigen test results, and almost all do, he said.

New York is an exception. Its positivity rate is based on all test results, antigen and PCR, Hammond said.

Nash said antigen test results — especially negative ones — are less likely to be reported to the state.

Another key difference is which date test results are attached to. The state’s positivity rate is based on when results are released. New York City and New Jersey base theirs on when the test is taken.

"From a scientific perspective, it’s more accurate to report the day the specimen was collected because … what you’re trying to get at is, on that specific date, what was the infection status in the community?" El-Sadr said.