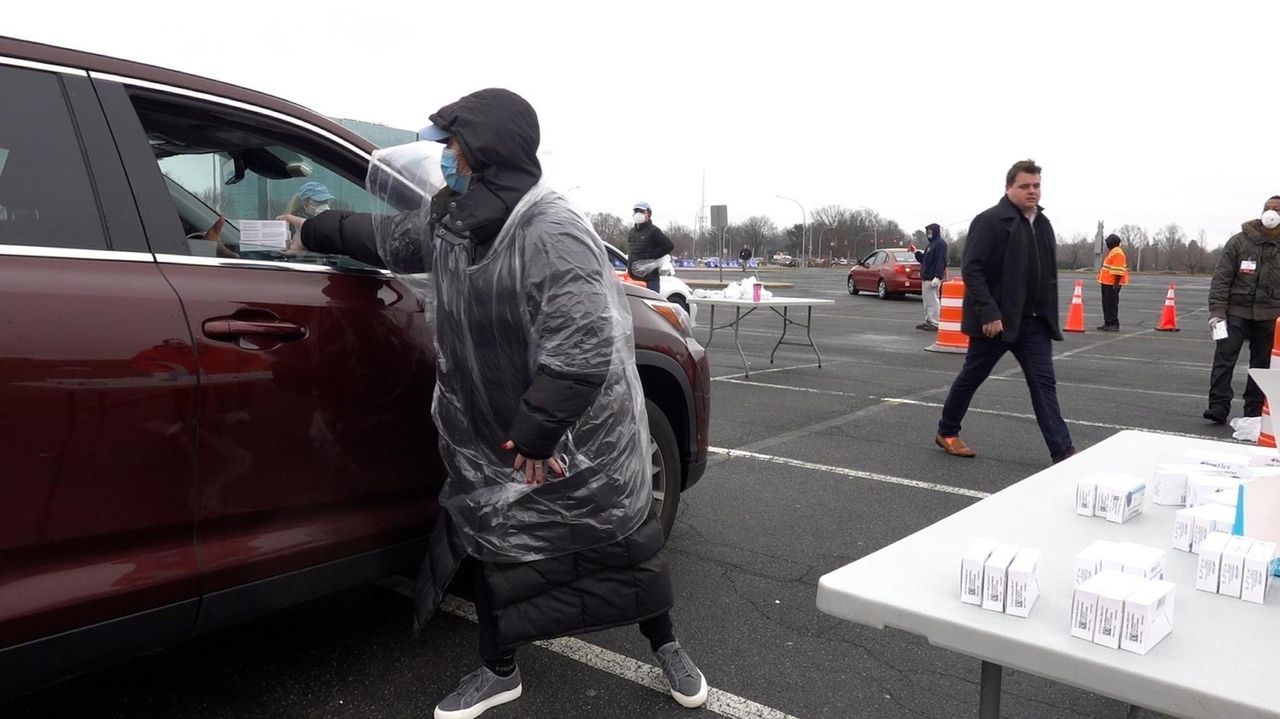 17,000 COVID-19 test kits were distributed at Nassau Coliseum on Sunday, as residents drove up and lined up down Hempstead Turnpike, as part of new Nassau County Executive Bruce Blakeman's initiative to give out 40,000 test kits this weekend. Credit: Newsday / Cecilia Dowd; Debbie Egan-Chin

This story was reported by Rachelle Blidner, Robert Brodsky, Lisa L. Colangelo and Laura Figueroa Hernandez. It was written by Colangelo.

The holiday season may have ended, but its impact on the winter COVID-19 surge could just be starting, health experts warned Sunday.

Long Island continued to have the highest seven-day average of new positive cases of all regions in the state with 24.16% on Saturday.

As Long Islanders return to work and school on Monday, the impact of holiday gatherings on COVID-19 rates could become apparent in the coming weeks.

"I think that the next two weeks will be critical," said Dr. Adrian Popp, chair of infectious diseases at Huntington Hospital. "I expect to see a surge in hospitalizations probably 10 days post January 1st. So the first half of January will be the one that's more stressful for the health care system."

Hospitals in both Nassau and Suffolk counties have also been feeling the impact, with both an increase in admissions and staffers unable to work because they are ill with COVID-19.

"Most people who are vaccinated, especially if they got the booster, most likely they will be asymptomatic and they should have a mild disease," he said. "However, people who did not complete their vaccination series, and specifically the unvaccinated ones, are at risk for developing more severe illness. And those are at risk to actually get hospitalized with moderate-to-severe COVID and they can stress our health care system."

Dr. Anthony Fauci, chief White House medical adviser, said Sunday the U.S. is "definitely in the middle of a very severe surge and uptick" during an appearance on ABC's "This Week."

Fauci, director of the National Institute of Allergy and Infectious Diseases, said public health officials, looking at data from South Africa where omicron was first detected, are hoping "this thing will peak after a period of a few weeks and turn around."

He urged people to get vaccinated, get a booster shot and wear masks in indoor settings to blunt the surge.

State figures released Sunday show 8,773 people hospitalized with COVID-19 across New York, up from 5,526 one week earlier, on Dec. 26.

There were 83 deaths from COVID-19 complications across the state on Saturday, including 13 people in Suffolk County and 5 in Nassau County.

Meanwhile, the demand for at-home COVID-19 testing kids remains high on Long Island, with another distribution effort snarling traffic for hours on Sunday. Thousands of people in their cars converged on Nassau Coliseum on Sunday morning hoping to snap up some of the 17,000 free testing kits being made available by county officials in conjunction with Nassau University Medical Center for the second day in a row. But all were gone by 11 a.m.

While the Saturday distribution of 23,000 kits hit few snags, Sunday saw traffic backed up for miles on Hempstead Turnpike and Glenn Curtiss Boulevard. Readers told Newsday that they waited upward of two hours lining up only to be turned away before 10 a.m.

Nick Zottoli of Seaford was on line on the Meadowbrook Parkway before 8 a.m., hoping to get kits for his 71-year-old mother.

But Zottoli said the process was "completely disorganized," with little direction provided to motorists on the parkway. He was eventually informed that all of the kits had been distributed.

"There was no signs. No cones. No police. No officials. No arrows. No direction," he said of his experience. "It was disorganized from the start. It was really terrible."

Stephanie Barchi of Port Washington took the morning in stride. She was among those who were turned away from a Meadowbrook Parkway exit ramp before 10 a.m. Sunday without obtaining the kits.

"It was very clear that it was not an unlimited supply," she said. "First come first serve. But I felt it was handled as well as possible."

The final kit was handed out shortly after 11 a.m., Boyle said, although he conceded that cars may have been turned away from the Meadowbrook Parkway and from side streets earlier.

Boyle said demand was higher Sunday, in part because Saturday was a holiday. The county also had 6,000 fewer kits to distribute than one day earlier.

In a statement, Nassau County Executive Bruce Blakeman touted the effort, noting that his administration, working with NUMC, distributed 40,000 tests in 48 hours.

"I want to thank all of the volunteers and first responders who helped to coordinate this large-scale event," he said. " … I am confident that my administration will be able to secure and distribute tens of thousands of additional tests to residents by the end of this week."

He cited New York as "number one" for COVID-19 cases, currently having "the greatest need," during a news conference at his Manhattan office.

The federal government has purchased 10 million courses of Paxlovid and 3 million of Merck’s drug, according to the U.S. Department of Health and Human Services (HHS).

But supply is limited: only 65,000 Paxlovid courses and 300,000 Molnupiravir were expected to arrive at distribution sites by the end of December, according to HHS.

Another 200,000 Paxlovoid courses are expected in January, with shipments to states and territories expected every two weeks as production ramps up.

Health experts have said the drugs, which require a prescription, will be given to people at the highest risk of developing severe illness to COVID-19 because of existing medical conditions and other considerations.

"It's very important that the antiviral pills are coming, but I don't think they are going to be helpful in the next week or two or three," said Popp. "They are not yet available on a large scale and right now they are for people with underlying, immunosuppressed conditions. Ideally they should also go to the elderly. There are also supply issues."

Many doctors have also said the current COVID-19 vaccines are still the most effective way to avoid becoming severely ill from the disease.

HHS did not immediately respond to a request for comment.

Here's what to do if you test positive for COVID-19As COVID-19 cases and positivity rates surge in New York State and on Long Island, here's a guide for what to know if you have symptoms, test positive or have been exposed to the virus. Where to get a COVID-19 booster shot on LIFor Long Islanders who have been fully vaccinated and are looking for a booster dose, these resources may help. COVID-19 vaccination rates by ZIP code on LI See latest news on the coronavirus, vaccinesStay up to date with the latest on the pandemic.