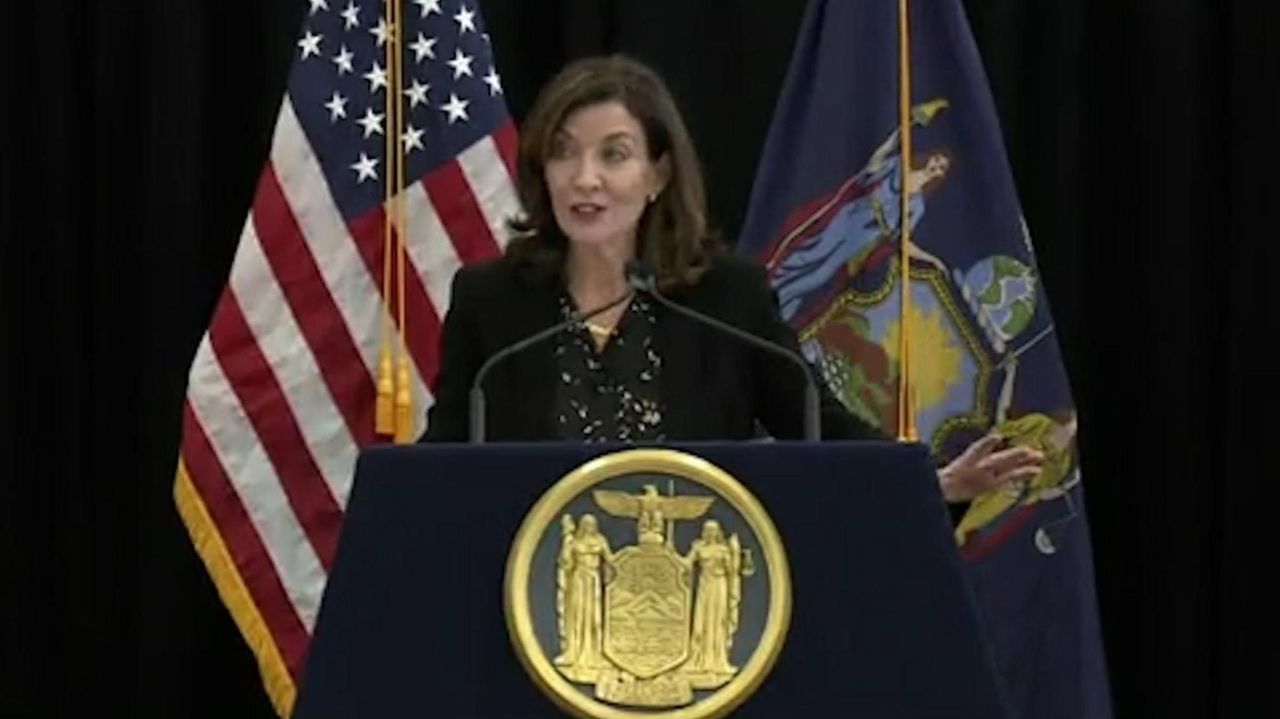 Speaking in Western New York, a region with some of the state's highest rates, Hochul said the ways to avoid restrictions include vaccinations and booster shots.

"At some point, if the numbers don't start on a downward trend, we're going to have to talk about larger protocols, which we all know are available to us. They're all available to us," she said. "So this is the warning. The warning is going out loud and clear today, and I truly hope that the community at large will listen to this, because it doesn't have to be this way."

Hochul, who spoke at a community center in Buffalo, didn't say which protocols she had in mind.

Last year, with the pandemic peaking, the state limited public gatherings, imposed lockdowns and masking mandates, and set capacity caps for places of assembly such as businesses, concerts, houses of worship and stores.

On Tuesday, Hochul said that this time restrictions would be focused on particular regions, rather than a blanket statewide policy.

"There are options on the table. There are a lot more options. But I believe the best option is for people to realize the role that each and every one them play in allowing us to say we are liberated from this pandemic once and for all," she said.

Neither her press office nor the state health department responded to a message seeking specifics on the extent to which Long Island might be subject to restrictions.

On the Island, the testing-positivity rate, as averaged over seven days, has trended upward: it was 3.03% on Friday, 3.12% on Saturday, 3.33% on Sunday, and 3.48% on Monday, according to news releases from Hochul's office.

"I'm not happy about this at all. Infection rates are high. Our vaccination rates should be higher. I mean, there's no reason why we're not at 100%. There's no reason," Hochul said Tuesday.

On Monday, 30 people statewide died of a virus-related cause, including two in Nassau and one in Suffolk, Hochul's office said. The statewide death rate has remained relatively stable over the past several months.

In her remarks Tuesday, Hochul again urged boosters for those who feel they live in a place where they're at particular risk of infection.

She especially urged boosters for those ages 65 and older, the age group at most risk for the worst effects of coronavirus, including hospitalization and death. She said 47% of those in that group have so far had a booster in the state.

"We have to make sure that they're getting boosters. Let's get those booster numbers up," she said.

She pointed to New York City, once the pandemic's epicenter, as a success story in combating the virus. She noted how in the city, she's seen face masking in public and the presence of other measures, such as a vaccine mandate for indoor dining.

Mayor Bill de Blasio on Tuesday said that among 5- to 11-year-olds — the latest age group to become eligible for coronavirus vaccination — there have been 72,000 vaccinations, of which 26,300 got the shots at a public school building over the prior week. And starting Nov. 30, vaccinators will be back at the public schools to administer second doses.

"We're going to do a full second pass — all elementary schools, every school in New York City that serves kids 5 to 11, we're going to be coming back to," de Blasio said at a virtual news conference.

Boosters are available in the city to anyone who wants one, regardless of residency.

Separately, at a Newsday Live webinar on Tuesday, two physicians said that it was relatively safe for Thanksgiving and other holiday gatherings, provided guests ages 5 and up are vaccinated and no one has symptoms of coronavirus infection.