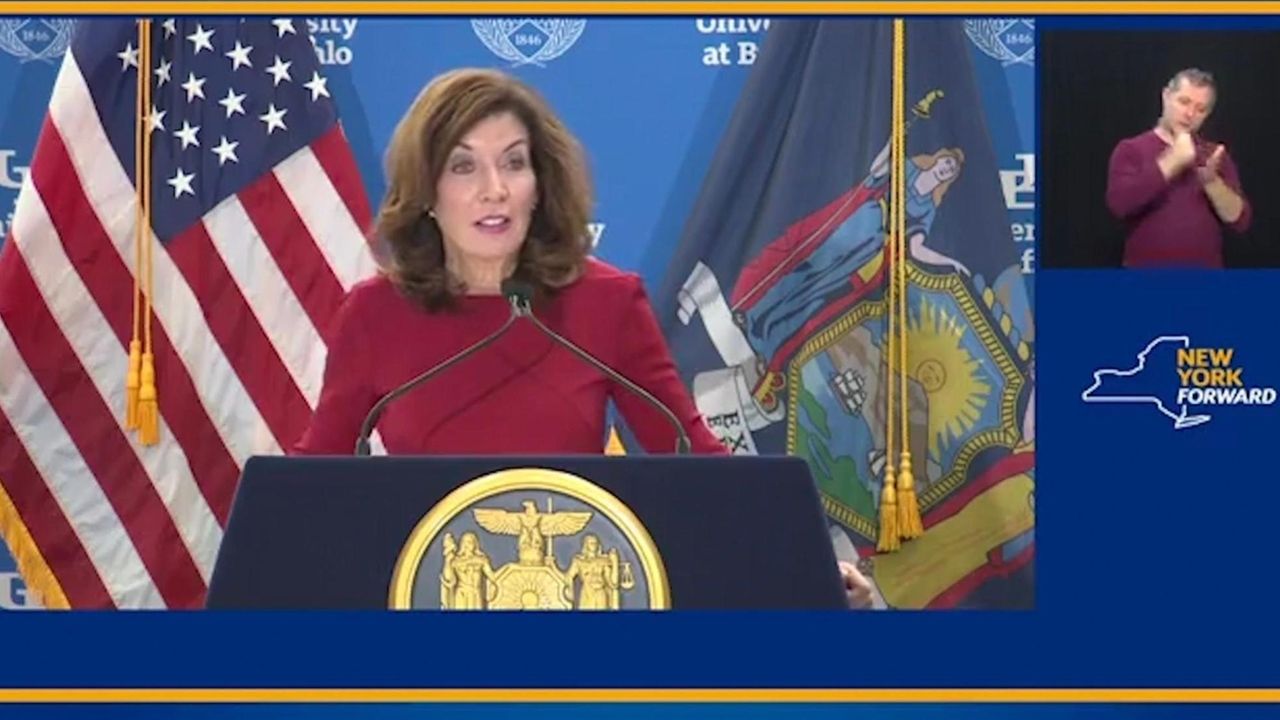 Gov. Kathy Hochul on Tuesday said she would work with localities on COVID-19 mandates that address each region's needs. Credit: NY Governor's Office

Gov. Kathy Hochul will work with the state Department of Health on a policy requiring schoolteachers and staff to undergo weekly testing if they are not vaccinated against COVID-19, the governor’s office said Tuesday.

Hochul had said earlier that she favored a vaccination mandate for school staff, but did not have the power to do so herself because the special emergency powers the Legislature had granted the governor’s office during the pandemic had expired or been reduced.

Tuesday's announcement, which Hochul made during her first COVID-19 briefing at the University at Buffalo, represents a shift in her legal approach but would still pressure school employees to get the shot.

Hochul said the state was "in the process of getting the legal clearance" to require staff and teachers at all public and private schools statewide to submit to weekly testing or vaccination.

"I think that's a compromise, but it's also I want everyone vaccinated," Hochul said. "But given the limitations I have right now, I want to make sure that everyone is. … They will be having to be tested once a week. So we'll be making that a reality very shortly."

Hochul had pursued a similar strategy with the universal school mask mandate put in place last week, in that the measure was formally declared by the state Department of Health.

The agency announced last week that masking would be required indoors at the state's public and private prekindergarten to 12th grade schools for 2021-22, including for adults and others already vaccinated.

Locust Valley’s school board rescinded its masks-optional policy Tuesday afternoon in a 5-1 vote with one abstention, deciding instead to comply with a statewide mandate requiring all students and staff to wear masks when inside school buildings.

In explaining the reversal, district officials cited pressure from the state, including a letter from Education Commissioner Betty Rosa warning that noncompliance with the mask mandate could result in criminal and civil penalties, as well as withholding state financial aid of districts violating state rules.

Before the vote, Locust Valley had given parents the option of sending children to school either masked or unmasked. Locust Valley schools are scheduled to open Wednesday along with dozens of other districts across Long Island.

The lone "no" voter, board Vice President Margaret Marchand, drew cheers from most of some 100 parents, students and other spectators in the auditorium of the district’s high school/middle school complex.

Hochul said she would be "flexible" in reevaluating masking measures, potentially allowing some regions to lift the mandates based on local infection numbers and vaccination rates.

"Kids are resilient. They can handle a mask on their face," she said. " … But one thing I'll tell you, I'm not leaving open-ended mandates. We'll do it now and we'll assess because there'll be parts of our state where the numbers drop, you get the vaccination nods, and we get the vaccine out to children."

Hochul made other announcements related to the fight against COVID-19.

New York State will allocate a combined $65 million to local health departments, including in Nassau and Suffolk, to support the distribution of COVID-19 booster shots for vaccinated individuals, Hochul said.

Hochul, who took office last week after Gov. Andrew M. Cuomo resigned amid allegations he sexually harassed nearly a dozen women, said the booster shot funding would go directly to municipalities to set up vaccination sites in their communities.

"We all thought we'd be turning the page on anything related to the pandemic certainly by this time. We have not," Hochul said. "The battle rages. We have to fight back."

Nassau and Suffolk will each receive about $1 million from $30 million in grant funding while the remaining $35 million will be distributed to each locality through an enhanced reimbursement rate based on how much they spend, said Freeman Klopott, a spokesman for the State Division of the Budget.

The Centers for Disease Control and Prevention have recommended a third shot for immunocompromised individuals as the effectiveness of the vaccine wears off. It is expected to authorize it for all Americans at least eight months after their first shot. The Biden administration has set Sept. 20 as the launch date for booster shots, pending approval from the Food and Drug Administration and the CDC.

Hochul, who announced last week that all staff in health care facilities across the state must be vaccinated, said she was looking to expand that mandate to all state-regulated facilities and congregate settings. Such a mandate would likely include nursing homes, group homes for the disabled and prisons.

"We have to let people know when they walk into our facilities that the people that are taking care of them … are safe themselves and will not spread this," Hochul said.

The COVID-19 positivity rate statewide Monday was 3.96% while the seven-day rolling average was 3.35%, according to Health Department data. There were 22 deaths from the virus — including three in Nassau and two in Suffolk — and 2,234 patients were hospitalized with it.

Long Island's positivity rate continued its steady climb up to 4.38%, with Suffolk County reporting 382 new cases and 311 in Nassau, the data shows.

Both counties continue to exceed the state's rate for vaccinating adults. In Nassau, 87.7% of adults have received at least one shot and just over 80% are fully vaccinated while in Suffolk 80.3% of residents have had their first dose and around 73% have completed their vaccination series.

LI hospitals: Delta variant seen in almost all new COVID-19 cases Dr. Aaron Glatt, chairman of medicine at Mount Sinai South Nassau, said 100% of cases treated at the Oceanside facility are delta, while at Stony Brook University Hospital, 94% of positive samples taken from July 19-30 and sent to the state's Wadsworth Laboratory were the highly infectious variant. These restaurants, businesses, colleges and NYC theaters will be requiring COVID-19 vaccinesNew York State and Molloy College have joined the growing list of employers, schools and entertainment venues that have issued COVID-19 vaccine mandates. Fauci: Masks best way to protect children in schoolsA mask mandate for New York State public schools begins Monday and Dr. Anthony Fauci says the protocol is needed nationwide. After state mask mandate for schools, a look at what's nextThe state Department of Health alleviated some tension over the issue of masks in schools when, late Friday, it put in place a mandate for universal masking inside school buildings. Now, time will tell if all of Long Island's 124 school districts follow through.