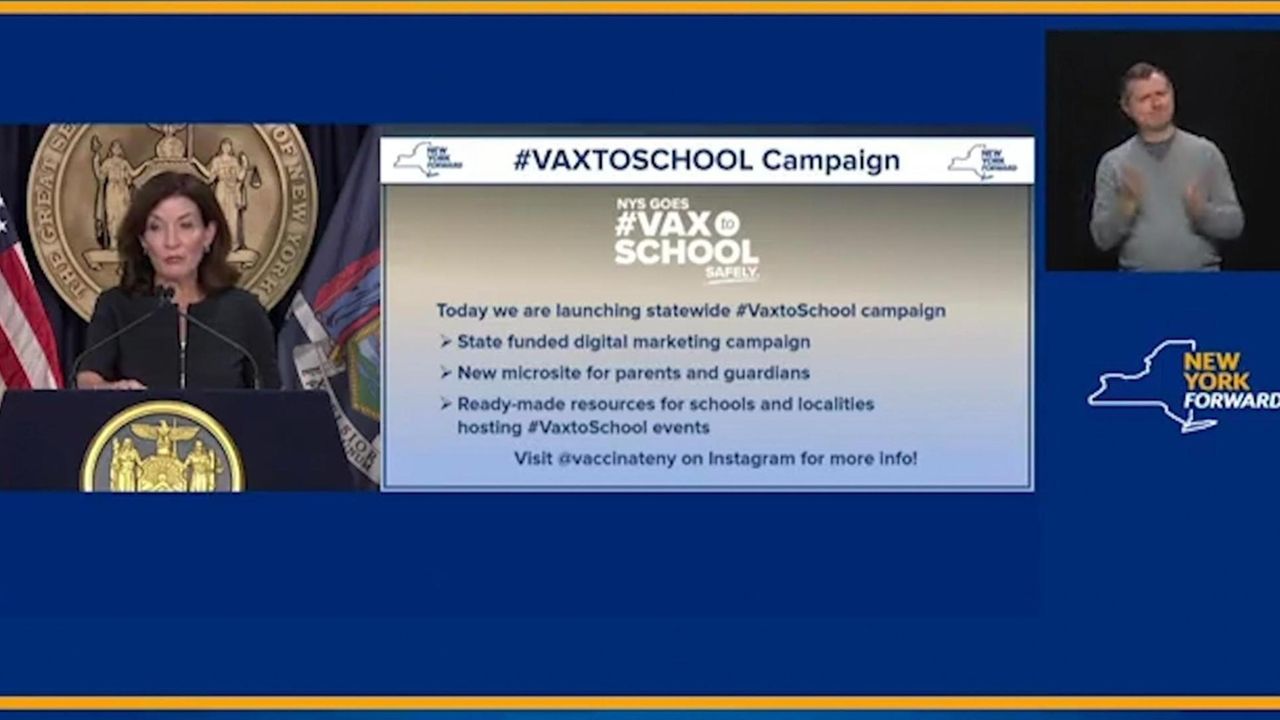 On Wednesday, Gov. Kathy Hochul announced a "Vax to School" campaign in an effort to bring up the vaccination rates among 12-17 year olds from the current rate of 50%. Credit: NY Governor's Office

This story was reported by Matthew Chayes, Lisa L. Colangelo and Bart Jones. It was written by Jones.

Gov. Kathy Hochul on Wednesday announced a campaign to increase voluntary COVID-19 vaccinations among people ages 12 to 17, though she said she was open to making the shots mandatory for that group.

Vaccination rates in that age group are lagging — only about 50% are fully vaccinated, the governor said, and the state’s "Vax to School" safety campaign aims to improve that through voluntary compliance.

She did not rule out making it mandatory, though she noted many parents would be nervous about it.

Asked at a news briefing whether she would make COVID-19 shots required for school-age children the way shots for other diseases such as measles and chickenpox are, Hochul said, "That is certainly an option, but I am also aware that this is something that parents are very, very anxious about."

She added: "I want to encourage parents to understand the science and the data that should lead them to the same conclusion we all have — that this is the best thing you can do for your child if you want to protect them from this virus."

Dr. David Battinelli, chief medical officer of Northwell Health, said it was unclear what impact the new state campaign may have, but eventually more and more people were likely to have their kids get the shots — whether voluntarily or by mandate.

"I can't say that a social media campaign or other things won't be helpful, they might be," Battinelli told Newsday on Wednesday. "But we've entered into a new phase. We’re back to school and you've got a whole bunch of mandates."

Battinelli said some people may initially resist mandatory vaccination and eventually comply. But not everyone.

"I think the real thing that is most interesting to everybody is how many people will eventually not comply and be willing to walk away from everything — from not being allowed to go to a Yankees game or a Knicks game to eating in a particular restaurant or even giving up a job," he said.

As parents became more comfortable with information about vaccine safety, Battinelli said, he thinks they will vaccinate their kids to avoid serious illness or having them be excluded from school.

"If you study the history of vaccines, this is exactly what happens every single time," he said.

Vaxmobile gets shots into youths

One focus of the mobile vaccination center has been middle schools and high schools in Elmont, Freeport, Baldwin, Rockville Centre and Long Beach.

"We’ve had a lot of success partnering with the leadership of those school districts," Calderone said. "We are bringing the vaccines to them and making it as easy as possible."

The Vaxmobile returns to the sites three weeks later to provide the second doses needed for the Pfizer-BioNTech vaccine, which is the only one currently available for 12- to 15-year-olds.

Asked what if anything schools and localities can and should do to boost the adolescent vaccination rate and whether the counties should ask for state help, the superintendents’ associations did not directly respond.

In a joint statement sent by their outside public relations agency Syntax, the associations said: "School districts will continue to be resources for the community under the direction of health and county officials."

County Executive Laura Curran said in a statement sent by staff that Nassau has launched a Student Vaccination Initiative through which thousands of eligible students have gotten shots. The initiative also trained youth ambassadors to support and encourage peers to roll up their sleeves.

Hochul said Wednesday that so-called breakthrough infections of fully vaccinated people getting sick with COVID-19 were extremely rare in New York, according to the data.

Just 0.5% of confirmed cases of COVID-19 are among people who are fully vaccinated, she said. And among fully vaccinated people, only 0.04% wind up in a hospital because of the virus.

"It is still a rarity," she said, though people should still wear masks when needed and wash their hands often to slow spread of the virus.

The state is also gearing up to provide third shots — or a "booster" — to people eight months after they receive two doses of the Pfizer or Moderna vaccine, she said.

She expects there to be ample supply of the vaccine — unlike earlier this year when COVID shots first became available — and said counties would set up mass distribution sites, unless they want help from the state.

Overall the state is doing fairly well among adults, with 81% of people over 18 years of age getting at least one shot, and 73% getting both shots, Hochul said.

The "Vax to School" program will include a digital campaign that uses Instagram, Facebook and Twitter to encourage young people to get their shots, she said.

New York City Mayor Bill de Blasio said Wednesday he didn’t expect COVID-19 to cause disruption this school year, which begins Monday. He cited the mandatory vaccination of school personnel, the two-thirds of city 12- to 17-year-olds vaccinated, and procedures relating to disinfecting and air purification at the city's more than 1,400 school buildings.

"This is going to be one of those game-changer days, one of these days that we'll remember when we turn the corner on COVID," de Blasio said, speaking at his daily news conference from City Hall.

The schools chancellor, Meisha Ross Porter, promised that "every building is the gold standard of health and safety." Workers are "checking every space to ensure it has the ability to bring in fresh air and get rid of old air. They are ensuring that schools are stocked with PPE and signage is available to help direct students," she said.

Porter said 72% of teachers had been vaccinated, and 65% of students 12 to 17 had gotten at least one dose.

Kevin Moran, her head of school operations, said every school building's air flow system had been inspected and approved by third-party engineers. Windows are open to the extent possible, particularly in older buildings built years ago following past pandemics. In buildings with HVAC systems, there are Minimum Efficiency Reporting Value, or MERV, filters. CO2 testers and anemometers are being used to gauge air flow. There will be electrostatic sprayers to disinfect the building regularly, plus a 30-day supply of PPE at every school in case students need to mask.

De Blasio said the city was still negotiating with the teacher labor union, the United Federation of Teachers, over exceptions to the vaccine mandate.

COVID-19 indicators continued to tick up on Long Island and throughout New York State in data released Wednesday.

The seven-day average for positivity in testing inched up on Long Island to 4.40%, while the average statewide increased to 3.34%.

Hospitalizations of people with COVID-19 increased by 59 statewide, to 2,415.

Across the state, 31 people died Tuesday of causes linked to the virus, including one in Nassau and two in Suffolk.

"We are watching the numbers like a hawk and while infections and other key metrics are ticking up, we know what it takes to beat back the virus," Hochul said in a statement. "We need to double down on exercising basic safety measures like wearing our masks, hand-washing, social distancing — and we need everyone to get vaccinated."