WASHINGTON — Top U.S. health officials sought to convey confidence Sunday in the federal effort to mass-distribute COVID-19 vaccinations as the Food and Drug Administration prepares this week to consider the authorization of the first vaccine candidate.

Moncef Slaoui, chief adviser of Operation Warp Speed, appearing on CNN’s "State of the Union," said President-elect Joe Biden’s transition team will be briefed this week on the military-backed effort to distribute vaccines to states once a contender is approved.

"I'm confident that, together, we will do the best we can to make sure the vaccines are delivered safely and effectively to all Americans," Slaoui said.

Slaoui’s remarks came in response to concerns raised last week by Biden, who said his transition team had yet to see a detailed distribution plan from the Trump administration. Biden’s team had been prevented from initiating discussions with federal officials sooner, until a Trump appointee who heads the General Services Administration formally signed off on activating the transition.

A top FDA panel is set to meet Thursday to review pharmaceutical giant Pfizer’s request to authorize emergency use of its coronavirus vaccine candidate, which would pave the way for its mass U.S. distribution.

"If the vaccine is approved on the 10th or the 11th, the minute it’s approved, the shipments will start," he said. "It should take them about 24 hours to make it to the various immunization sites that the various jurisdictions and states have told us to ship vaccines to them. And within, I would say, 36 hours from approval, potentially the first immunization could be taking place."

Even with vaccine candidates on the horizon, Slaoui said "it’s absolutely vital that everybody" continue "to wear our masks, distance, wash our hands, pay attention to what we are doing, to make sure that we are there by the spring to benefit from the vaccine."

Health and Human Services Secretary Alex Azar, appearing on "Fox News Sunday," pushed back on concerns raised by Biden that the federal distribution plans were not yet complete.

"We have comprehensive plans from the CDC working with 64 public health jurisdictions across the country, as our governors have laid out very detailed plans that we've worked with them on," Azar said. "We're leveraging our retail pharmacies, our hospitals, our public health departments, our community health centers."

Azar added: "This is being micromanaged and controlled by the United States military, as well as our incredible private sector."

Dr. Deborah Birx, the White House coronavirus response coordinator, described on NBC’s "Meet the Press" the current surge in cases and the expected rise of cases in the winter as "the worst event that this country will face, not just from a public health side."

Senate leaders behind a bipartisan coronavirus relief bill introduced last week said they were optimistic that their $908 billion proposal will pass Congress.

Sen. Joe Manchin (D-W.V.), in an interview with NBC’s "Meet the Press," acknowledged that congressional Democrats have been pushing for a larger $2 trillion package, but said the focus of the current bipartisan proposal is to extend existing coronavirus relief measures that are set to expire at the end of the year, such as unemployment assistance and increased access to food stamps.

"The $908 billion of investment we make into the citizens of this country and trying to keep this economy from collapsing could be more important than $2 trillion would be in February and March if we do nothing," Manchin said. "And maybe then it might be too late for so many people and small businesses."

Manchin said that once Biden takes office on Jan. 20, Biden "can put together a different proposal that takes us further down the road for more recovery." 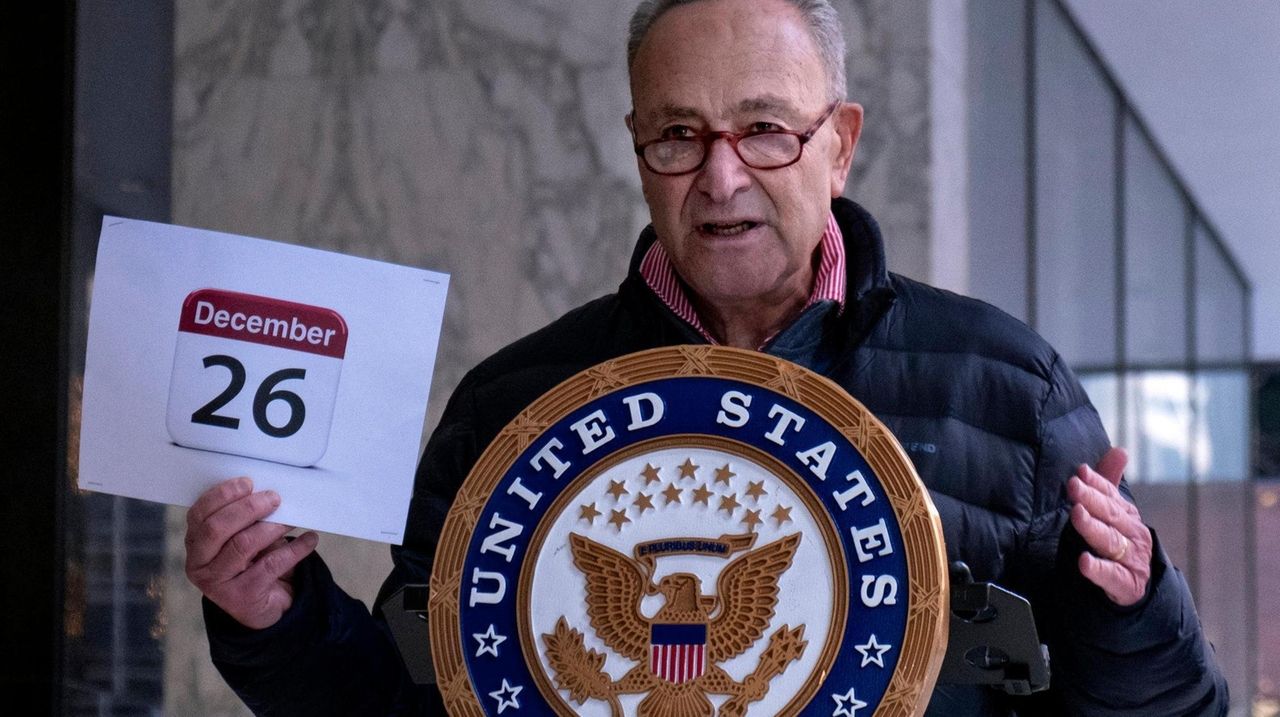 Schumer: Pandemic Unemployment Insurance to end the day after Christmas Speaking outside his Manhattan office on Sunday, Sen. Chuck Schumer (D-N.Y.) urged the Senate and its majority leader, Mitch McConnell, to extend unemployment insurance that Schumer said is set to end on Dec. 27. Credit: Craig Ruttle

"Right now, it’s an emergency. Christmas is approaching. We cannot have a heartless cutoff of these benefits," he said.