Northwell Health's vaccine mandate included all of its employees at every facility it operates, going beyond a state requirement. Credit: Northwell Health/Lee Weissman

Northwell Health, the state's largest health care system, said Monday it had fired 1,400 employees for refusing to comply with a state and systemwide requirement to get vaccinated against COVID-19.

The figures from Northwell, which in September listed its workforce as 77,500 employees, were released as some groups feared the state mandate requiring home health care aides to get vaccinated by Thursday will result in shortages for that industry.

"Northwell regrets losing any employee under such circumstances, but as health care professionals and members of the largest health care providers in the state, we understand our unique responsibility to protect the health of our patients and each other," spokeswoman Barbara Osborn said in a statement. "We owe it to our staff, our patients and the communities we serve to be 100 percent vaccinated against COVID-19."

Osborn said care at all of Northwell's facilities, including 11 Long Island hospitals out of 19 total systemwide, has not been interrupted. The entire workforce is now vaccinated, officials said.

Northwell officials said they would not provide specific job titles for the employees who were fired, but the number includes clinical and nonclinical staff. Officials also would not disclose how many of the fired employees came from Long Island facilities.

The system's own COVID-19 vaccination policy for its employees was more sweeping than the state mandate that went into effect on Sept. 27, requiring health care workers at hospitals and nursing homes to receive at least one dose of the vaccination by the deadline. Northwell’s vaccine requirement included all of its employees.

The state gave workers in hospitals and nursing homes until last Monday at midnight to get their COVID-19 shots or lose their jobs. The order was issued in August by then-Gov. Andrew M. Cuomo and is being implemented by Gov. Kathy Hochul.

The employees fired by Northwell represent the largest number of firings reported by a single system with a major presence on Long Island so far. Other systems have reported firings or suspensions in the dozens or low hundreds.

Officials at Mount Sinai South Nassau hospital in Oceanside said letters of separation were being sent to 14 staffers who have not provided proof of vaccination. Another 100 staffers have requested religious or medical exemptions. The hospital has 3,657 full- and part-time staff and is currently at 99% compliance.

"Mount Sinai South Nassau supports the New York State and federal mandates that health care workers receive the COVID-19 vaccine to protect themselves, their loved ones, the community and the patients we serve," the hospital said in a statement. "We have repeatedly counseled unvaccinated staff who have concerns about the vaccine, providing information in Town Hall settings, unit meetings and during one-on-one discussions with our clinical experts."

Other systems, including Stony Brook and Catholic Services, said they fired, furloughed or suspended without pay workers who refused to get the shots.

But some of the hospitals also said they saw substantial numbers of workers get the shots last week rather than lose their jobs.

Groups representing home health care workers said Monday that the state mandate set to go into effect Thursday will cause major disruptions because substantial numbers of aides and other medical personnel who assist people in their homes have not been vaccinated.

"It really means cutting off service to vulnerable people, because the way the mandate is written, you’re either vaccinated or you’re fired. There’s no in between," said Al Cardillo, president and CEO of the Albany-based Home Care Association of New York State.

The mandate is "going to create a cliff for those people" by forcing them out of work and leaving patients unattended, he said in an interview.

"There is absolutely no way that a void from something like this is going to be filled," he said.

He noted that his group favors vaccination of the workers, but that the state plan needs to be phased in more gradually.

State officials responded that a similar mandate they implemented last week with hospitals and nursing homes worked, prompting thousands of workers to get the shots to avoid losing their jobs.

"We are encouraged by the increase in hospital and nursing home staff who got vaccinated in the weeks and days leading up to their vaccine mandate deadline, and we expect the same of those health care workers who will be required to receive at least one vaccine dose by October 7," the state Department of Health said in a statement.

"It is critical for all health care workers to get vaccinated to protect themselves and our most vulnerable populations, and we will continue to work with providers and stakeholders to ensure this deadline is met and to minimize any disruptions in care."

"New York’s home health care industry is already operating at a 100,000-worker deficit, and this mandate will create an artificial shortage for which there is no contingency," Pecora said in a statement. "There are not enough vacant nursing home beds or National Guard members to cover an exacerbated worker deficit."

He added that "by our estimates, nearly 70 percent of our 32,000 members have received the COVID-19 shot. We hope the governor is willing to work with us to ensure more than 10,000 home health care aides, mostly immigrant women of color, don’t lose their jobs on October 8, denying thousands of New Yorkers the lifesaving services they provide."

COVID-19 indicators continued to tick down on Long Island, though they still remain well above levels as recently as June.

The number of new confirmed cases in test results on Sunday was 167 in Nassau and 220 in Suffolk, for a total of 387. New York City logged 1,062 cases. The number of people getting tested, however, often is lighter on Sundays than other days of the week.

The seven-day average for positivity in testing continued its downward trend on Long Island, falling below 3% for three days in a row. The figure on Sunday was 2.92%.

Across the state, 24 people died on Sunday of causes linked to COVID-19, including two in Suffolk. 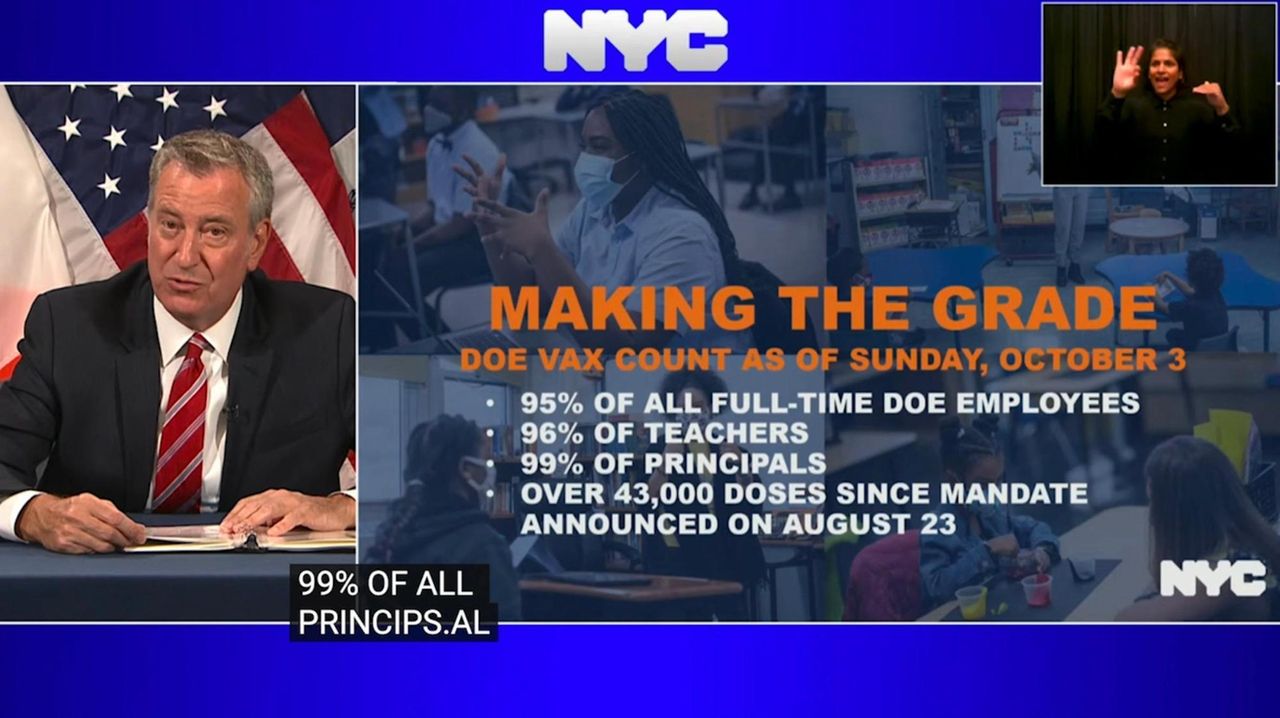 Meanwhile, 95% of full-time New York City Department of Education employees are vaccinated against COVID-19, Mayor Bill de Blasio announced Monday, the day his vaccination mandate for school personnel went into effect and thousands of substitutes for the unvaccinated went to work.

Everyone still working in person in the city's public school buildings as of Monday is now vaccinated, the mayor said.

With approximately 135,000 full-time employees in the department, about 6,750 workers aren't vaccinated — including about 3,000 of the school system's 75,000 teachers, according to the percentages de Blasio provided Monday.

"Thousands and thousands" of substitute teachers and other replacement personnel were ready to platoon into posts that were left vacant by those who are unvaccinated and not allowed to work in school buildings, de Blasio said.

The 95% total vaccination rate includes 96% of teachers and 99% of principals, de Blasio said at his daily news conference.

"Every adult in our schools is now vaccinated, and that's gonna be the rule going forward. And that's the way to keep kids safe — and the whole school community safe," he said.

It was not immediately clear how many employees have been fully vaccinated or have received just one dose.

New York City's mandate is stricter than the one Hochul imposed for New York State, which allows teachers, administrators and other school personnel to go unvaccinated as long as they're tested weekly for coronavirus.

On Friday, the U.S. Supreme Court refused to block the city's mandate, which was challenged by municipal labor unions.

The city also came to an agreement with District Council 37, a labor union whose membership includes nearly 40,000 personnel in the public schools and public hospitals, the union said in a news release. Under the deal, those who are unvaccinated can choose unpaid leave. They’ll be able to keep benefits and be paid out for certain unused time. School personnel can be on leave until next September. Health workers can be fired beginning Nov. 1.

New group of health care workers face state vaccine mandate this weekThe state mandate for health care workers to get vaccinated against COVID-19 continues to roll out as virus deaths nationwide in recent days topped what Dr. Anthony Fauci called a "staggering" toll of 700,000. NYC can impose vaccine mandate on teachers, judges ruleThe nation's largest school district can immediately impose a vaccine mandate on its teachers and other workers, after all, a federal appeals panel decided Monday, leading lawyers for teachers to say they'll ask the U.S. Supreme Court to intervene. Federal judge deals blow to vaccine mandate for NYC teachersNew York City schools have been temporarily blocked from enforcing a vaccine mandate for its teachers and other workers by a federal appeals judge just days before it was to take effect. COVID-19 vaccination rates by ZIP code on LI