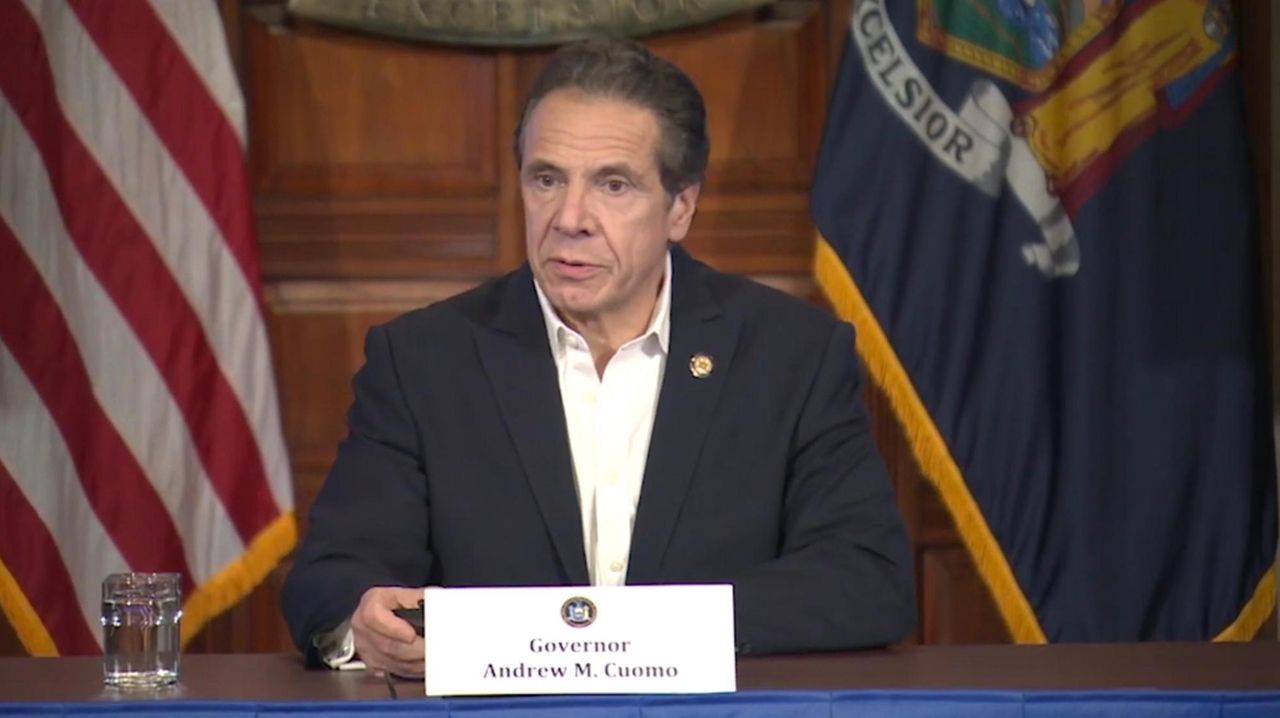 At a news conference on Saturday, Gov. Andrew M. Cuomo said that the New York presidential primary will be pushed back from April 28 to June 23 because of the coronavirus pandemic. Credit: NY Governor's Office

Gov. Andrew M. Cuomo said Saturday that the New York presidential primary will be pushed back from April 28 to June 23 amid the ongoing coronavirus pandemic.

The governor moved the timing of the primary to align with the congressional and legislative primaries in New York.

Meanwhile, the onslaught of new COVID-19 cases and fatalities continues. There were 52,318 cases of the virus in New York State as of Saturday, Cuomo said, with 728 deaths. That's an increase of more than 7,000 cases statewide from the previous day, and a one-day increase of more than 200 deaths.

On Long Island, there were more than 9,600 total cases reported, with 15 new deaths.

A Nassau County worker was among the new fatalities, as well as a seventh resident of Peconic Landing, the hard-hit retirement and continuing-care community in Greenport.

Cuomo noted that those who died tend to be older and those with underlying respiratory and immune system problems.

"That doesn't make you feel any better," he said. "These people are lost. They are lost due to this virus. These are people who would be with us if not for this virus."

In New York City on Saturday, there were 30,765 confirmed cases of the coronavirus and 672 deaths, according to city government officials. One of the city's leaders, MTA chairman Patrick Foye, announced he has the virus.

“Pat is currently isolating at home, feeling good and maintaining his full schedule,” Collins said in a statement. “Pat was last in the office on Wednesday, maintained a safe social distance and was asymptomatic at that time. He worked remotely Thursday and Friday, following a previously arranged schedule.”

The MTA said Wednesday that more than 50 of the transit agency’s employees had tested positive for the virus.

An NYPD detective assigned to a Harlem police precinct died from the virus, NYPD Commissioner Dermot Shea said Saturday. Cedric G. Dixon had been with the NYPD for 23 years and was assigned to the 32nd Precinct, Shea said.

Dixon, a Bronx resident, is believed to be the first NYPD officer to die from the virus.

Nassau County Executive Laura Curran announced eight new COVID-19-related deaths, including the first death of a county worker, bringing the total for the county to 35, her office said.

Suffolk had seven new deaths attributed to the virus, all in people with underlying health conditions, which brings the number up to 30 total deaths in the county, Suffolk County Executive Steve Bellone said.

Watch: Bellone on the importance of small businesses surviving pandemic

“The numbers have risen again significantly over the last 24 hours,” Bellone said.

Cuomo said that expansion would add 4,000 beds toward the goal of the state reaching 140,000 hospital beds at the apex of the outbreak, which he said could come in 14 to 21 days.

Minutes after Trump floated the possibility of a quarantine for the New York region, Cuomo on Saturday dismissed the idea, calling it “unworkable.”

Later Saturday night, on CNN, Cuomo said a possible New York quarantine “would be a federal declaration of war on states" and would paralyze the economy. “It would be exactly opposite everything ... [the president] has said and everything he has done to date. And it would be wholly counterproductive.”

Cuomo offered some rare good news in his briefing Saturday, but cautioned people to not put too much stock in it.

The governor noted that the number of new daily ICU cases in New York decreased from 374 on Thursday to 172 on Friday. But he noted that the overall trend in these cases is still rising.

Some other good news: The number of new hospitalizations in the state decreased from 1,154 on Thursday to 847 on Friday, he said. But here too, the overall trend is still going up, he said.

"You could argue the trend is slowing," Cuomo said. "I say follow the numbers."

Cuomo said the hospital systems need to work together, in that when one hospital becomes overwhelmed — running low on supplies or beds — it should be able to look for help from another health system.

He said the state might step in to facilitate this, potentially moving some downstate patients to upstate hospitals.

The governor also announced that the State Department of Health Wadsworth Lab is working in partnership with other labs to evaluate antibody testing that is designed to help very sick COVID-19 patients.

The USNS Comfort is expected to arrive in New York City on Monday, he said. That will provide 1,000 new beds and additional medical personnel.

Cuomo said the country "has been behind this virus since Day One. You don't win on defense, you win on offense."

He said the nation must come together on purchasing materials that are needed, rather than the current situation in which one state is literally competing against other states — and consequently driving up the prices.

Each public crisis necessitates its own materials, Cuomo said, and with COVID-19, the great need is for ventilators, he stressed.

The alternative to a ventilator is what medical personnel call a bag valve mask, which fits over a person's face and repeatedly must be squeezed by hand to keep it working. The state already has purchased 3,000 of them and has ordered an additional 4,000, he said.

But this is not an acceptable alternative to ventilators, he said, since it would require numerous people switching on and off to help keep a person breathing.

He addressed recent statements by Trump that questioned whether New York actually needs 30,000 additional ventilators, the number that Cuomo has been requesting.

"So we're planning for that quote-unquote worst-case scenario, which the models predict," Cuomo said. "Maybe we never get there, maybe we flatten the curve and we slow the infection rate so we never get to that point and that's what we're trying to do and we're working on that day and night."

Cuomo also said medical personnel are administering 1,100 tests of hydroxychloroquine and Zithromax, a prescription Trump has said he is optimistic about.

"We hope to be optimistic also, but we're now using it on a large-scale basis, particularly in the New York City hospitals, and we'll be getting results soon," Cuomo said.

The toll in Nassau, Suffolk

At Peconic Landing, the seventh death was a 90-year-old woman at The Shores for Skilled Nursing. She died Friday evening after receiving treatment for symptoms of COVID-19 at Stony Brook Eastern Long Island Hospital since March 14.

Of the new deaths in Suffolk, the youngest was a man in his 50s who died at St. Catherine of Siena Medical Center in Smithtown, and the oldest were two women in their 90s, Bellone said.

Bellone said that of the positive cases in Suffolk, 16% are people over age 65.

“These are moms and dads, grandmothers, granddads, friends and neighbors,” he said.

As of Saturday, 409 people were hospitalized with the COVID-19 virus in Suffolk, up from 331 patients on Friday, Bellone said.

There were 139 patients in an intensive care unit, or ICU, on Saturday, up from 119 on Friday, Bellone said.

“The trend is clear, the trajectory is clear, and it is pointing us toward the surge that is coming at our health system,” he said.

In Nassau, Curran said the new deaths included a 65-year-old woman who worked for the county’s department of social services temporary assistance program. The woman was not identified.

“She devoted her career to helping families in times of need,” Curran said. “We grieve her loss and are with her family.”

Other Nassau deaths include five men and two women, ranging in age from 56 to 92 years old.

The county placed an emergency order for an additional 100 ventilators expected to arrive in 10 days, but officials were seeking to expedite the shipment.

“The patients that are coming in are coming in more sick,” Curran said. “Each of our hospital leaders have highlighted the need for ventilators, personal protection equipment and staff.”

“Hospitals are encouraging people to stay home if you can,” Curran said. “If you’re mildly symptomatic, you know how to take care of yourself with a bad cold or the flu. Please do it the same way and stay home.”

Nassau County police have recorded 55 positive cases among officers and staff, with 144 members of the police department in precautionary quarantine.

The Nassau sheriff’s department has 10 correction officers who tested positive in addition to one deputy, with 26 deputies in quarantine. Intake officers are wearing masks when processing inmates.

The county has three inmates at the Nassau County jail who have tested positive and been quarantined in a new isolated housing area, Curran said. The jail also has 13 inmates in precautionary quarantine.

TO HELP IN CORONAVIRUS FIGHT

See in photos how the coronavirus is changing life on LI, in NYC during March 2020See the latest pictures from around the region during the coronavirus outbreak for the month of March 2020 See the latest news on the coronavirus, vaccinesKeep up to date with the latest on the global coronavirus outbreak. Coronavirus: Your questions answeredCan you get it from a cardboard box? Can you contract the virus twice? There are a lot of questions right now. We're here to answer them for you. Cuomo limits prescriptions for two drugs to active virus casesPrescriptions for the drugs touted as possible treatments for COVID-19 can no longer be prescribed for people who want them just in case they get sick.