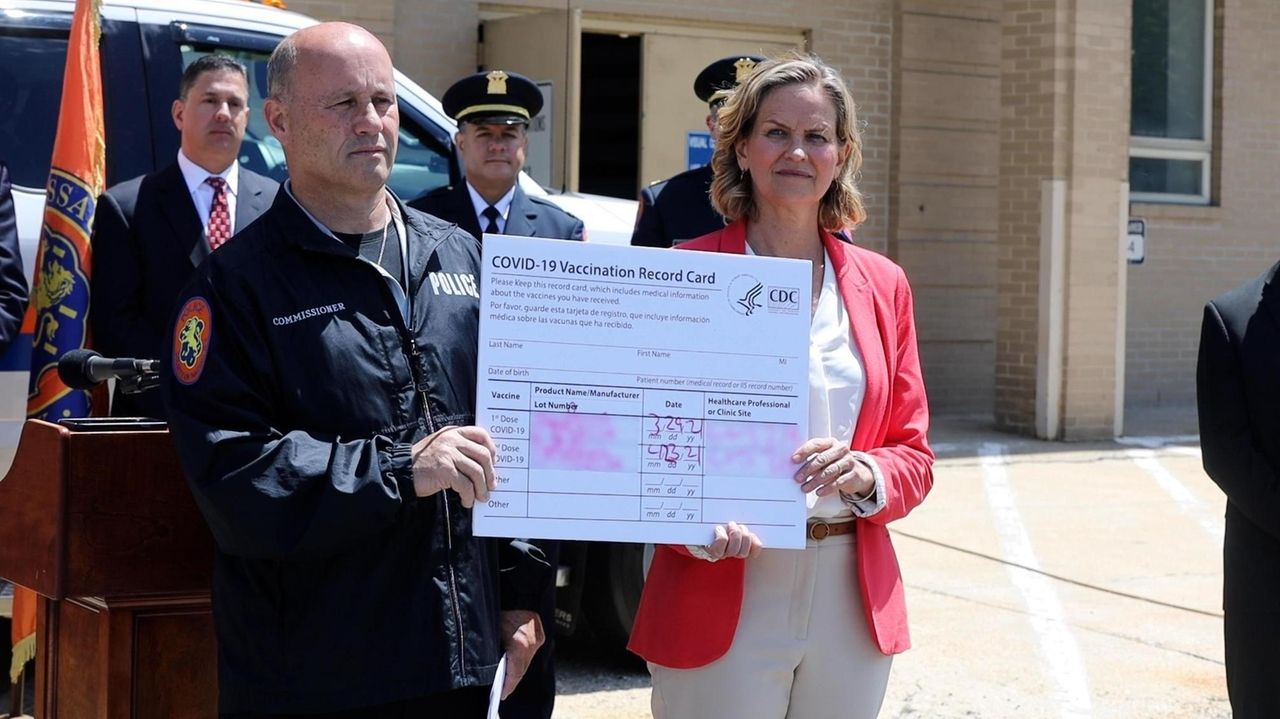 A Levittown man allegedly stole COVID vaccination cards from CVS, with the intention of giving them to family and friends. Police on Thursday said they found the cards in his car. Cecilia Dowd reports. Credit: Howard Schnapp

A Levittown man stole dozens of blank COVID-19 vaccination cards from his job at a CVS pharmacy and planned to sell them to his unvaccinated friends, according to Nassau police and charging documents.

CERT officers observed Honig sitting in a gray Mazda with the engine running in a high crime and drug area, according to Nassau Police Commissioner Patrick Ryder.

Inside the vehicle, police found eight pre-filled vaccination cards from the Centers for Disease Control and Prevention and 54 blank vaccination cards that Honig stole from the CVS on Hempstead Turnpike in Levittown, according to Ryder and charging documents. Police also found a pair of silver brass knuckles and a Xanax pill Honig had without a prescription authorities said.

Honig, who has no prior arrests, was arraigned Wednesday and released on his own recognizance. He is due back in court Wednesday.

"We can't have scams like this occurring," Ryder said at a news conference in Mineola. "The idea of getting us back to normal is that when you walk into a place and they are requiring that [vaccination] card you want to make sure that card is factual."

Honig's Legal Aid attorney did not respond to requests for comment and no one answered the door Thursday at Honig's Levittown home.

The vaccination cards were pre-filled with the batch and store number as well as the dates the vaccine was supposedly distributed, Ryder said. The cards were only missing the name of the vaccinated individual and their address, according to the commissioner.

Honig told detectives: "I sell the cards to kids so they can go to school," according to charging documents.

Nassau County Executive Laura Curran said the scam could have set back the county's recovery from the COVID-19 pandemic.

"The reason we can get back to normal is because people are getting vaccinated," Curran said. "If you're faking it, it could set this whole thing back. That's the last thing any of us want."

In a statement, CVS said it was cooperating with the investigation.

"Following his arrest, we took immediate steps to terminate his employment as his alleged activity conflicts with our values, our policies and our commitment to safe, secure vaccination protocols," said CVS spokeswoman Amy Thibault.

Ryder said CVS promised to "tighten up their policies" to ensure limited access to the vaccination cards.

The Department of Health and Human Service's Inspector General's office will work with Nassau police, Ryder said, as the investigation continues.

1:49
Not all are ready to drop safety measures despite NY reopening
Hot Tips For a Hot Market: For Sellers
LI leisure sector led 1% monthly job gains in May
Low vaccination rates may be linked to college students
1:25
Employers can help ease workers' post-pandemic anxiety
29:58
Summer camp outlook: Sun, fun and, sometimes, masks
Didn’t find what you were looking for?