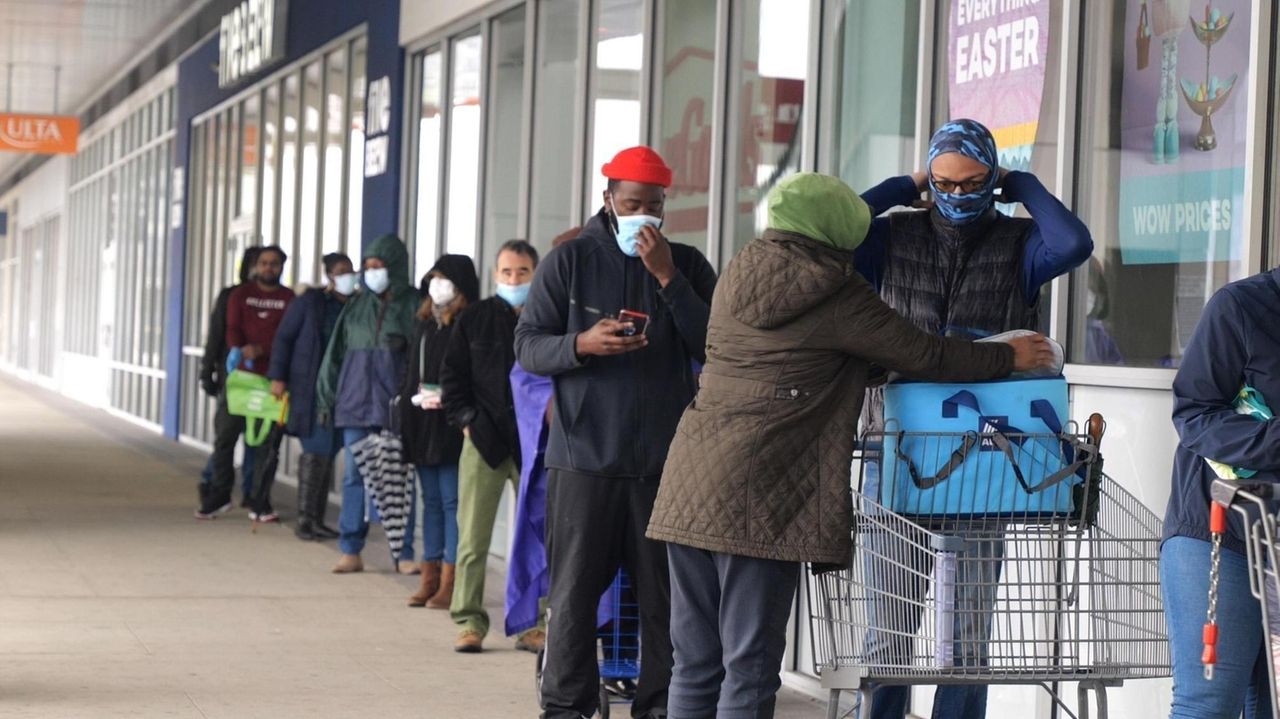 Gov. Andrew M. Cuomo on Sunday laid out his plans for reopening the state and some Long Islanders who were out shopping while practicing social distancing shared their thoughts on the plan. Newsday's Pat Dolan has the full report. Credit: Newsday staff; Facebook / Governor Andrew Cuomo

Gov. Andrew M. Cuomo on Sunday offered up a broad outline for reopening a state economy decimated by the COVID-19 pandemic, with New York's upstate region likely kicking off the first phase of a carefully monitored restart after May 15.

Cuomo said social distancing and his order shutting down many businesses statewide to slow the spread of the virus are working. Officials in Albany and different regions of the state are looking at incrementally reopening certain businesses, starting with construction and manufacturing — as long as key medical indicators continue to improve.

"No doubt, we’ve gone through the worst," Cuomo said at his daily coronavirus briefing in Albany, where he also told reporters that hospitalizations and deaths statewide from COVID-19 continue to drop.

"As long as we act prudently going forward," the governor said, "the worst should be over."

“That's music to people's ears,” said Eric Alexander, the organizer of the Long Island Main Street Alliance. Alexander said even a possible reopening timeline would be valuable to business owners.

“I think folks just want clarity of when” they can reopen, he said.

“I think Gov. Cuomo's plan is dipping a toe in the water to see what the impacts will be on the state,” said Summer Johnson McGee, the dean of the school of health sciences at the University of New Haven in Connecticut. “It will be very interesting to see the results, and it will be a good test case as well to see if we can actually deploy adequate enough testing statewide to be able to keep the population safe.”

New York's PAUSE order closing all nonessential businesses expires May 15. After that, the first reopening phase would likely start upstate, which has fewer infections, with construction and manufacturing where distancing is possible, Cuomo said.

After a two-week period to watch hospitalizations and other indicators that measure the spread of infection, businesses in the next phase would be evaluated based on how essential they are and their ability to operate without increasing the spread, the governor said. He cited as an example the possibility that sports could be played without fans in attendance.

He added that won't mean "total consistency. But it means coordination."

School reopening would be assessed as the second phase proceeds. Some districts, he said, are discussing summer school to make up for lost time.

"Schools are necessary for a large-scale business reopening. So you couldn't really get to a maximum phase two without opening schools," Cuomo said. "Do you reopen for the rest of the school year?"

Also under consideration, he said, is how to safely open beaches or public swimming pools as the temperature heats up.

"We need summer activities in downstate New York," Cuomo said. "There’s a sanity equation here also we have to take into consideration."

The governor said he'd look at three barometers to adjust the "dial" of reopening the economy: hospitalizations, antibody testing and positive tests for COVID-19. He agreed with Centers for Disease Control and Prevention guidance that hospitalizations would have to decline for 14 consecutive days before beginning to open up the economy.

Until there’s a cure or vaccine, McGee said an increase of new cases will most likely follow once sections of the economy reopen, even though the spikes may not be as severe.

“The reality is, no matter what we do to open the economy, there is going to be a second wave,” she said. “The question is, can we do enough things and put the measures in place to keep those tiny waves [or] keep them as ripples?”

Statewide, there were 367 COVID-19 deaths on Saturday, including 349 in hospitals and 18 in nursing homes, Cuomo announced. As of Saturday, 16,966 people had died. While there were slightly more than 1,000 new coronavirus cases, hospitalizations continued to decline for the 13th straight day, according to state administration officials. The number of hospitalizations are "back where we were on March 31," Cuomo said.

Nassau County Executive Laura Curran said Sunday that she is speaking to leaders of key industries — such as construction, home building, education and small business — "about how they're preparing for next steps."

Curran said she has heard proposals for residential construction, and other construction projects, and "that seems like a logical next step." She noted that construction workers are "used to OSHA restrictions, all type of safety measures." The county, she added, is "just going to add some more, and it's going to provide much needed jobs."

Bellone: 'We are continuing to see the downward trend' Suffolk County Executive Steve Bellone on Sunday gave an update on COVID-19 in the county. He said hospitalizations and other statistics were continuing to decrease, but the total number of Suffolk coronavirus-related deaths has risen to 1,070. Credit: Facebook / Suffolk County Executive Steve Bellone

In a later statement, Curran said another 29 Nassau residents have died from the virus, bringing the total to 1,587. COVID-19 hospitalizations in Nassau County fell for the 11th straight day.

Northwell Health on Sunday said the number of COVID-19 patients at its 19 hospitals fell to 2,014. The New Hyde Park-based health system said it has seen a drop of more than 22% over the last six days.

Bellone said starting to phase reopening upstate “makes sense” considering that the region has had fewer coronavirus cases than downstate. 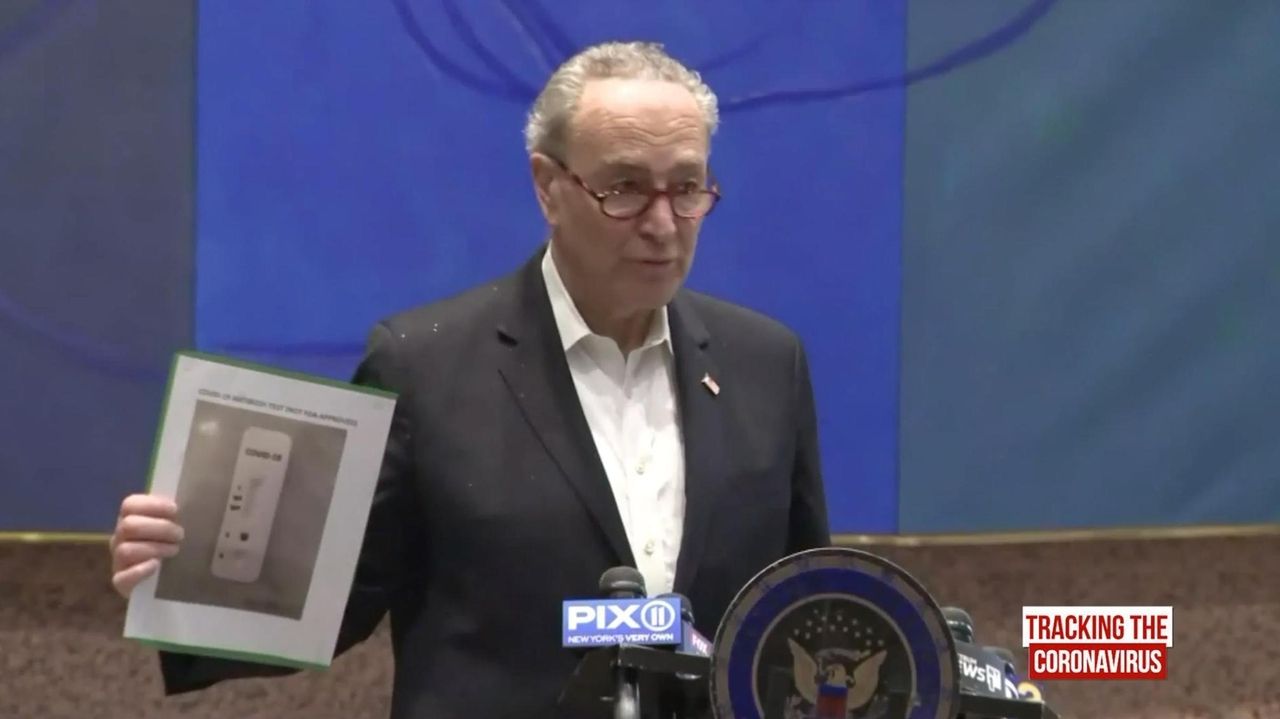 Schumer 'sounding the alarm' on faulty testing kits Sen. Chuck Schumer (D-N.Y.) on Sunday held a news conference to warn about COVID-19 tests that are being sold online but he said are not approved by the FDA. Credit: WPIX

He said county officials are working on a local reopening plan as well, including protective measures businesses can take to reopen. A working group is also analyzing whether and how to reopen beaches and parks.

“What my focus is, is putting together the ideas and plans on a local level so we can be ready to move forward with phased reopening as soon as it makes sense,” Bellone said.

Kevin Law, president of the Long Island Association. a regional business group, said: "I think Governor Cuomo is going about reopening the economy the right way."

He said he appreciates that Cuomo is basing his plan on science and public health, "not the desire we all have to get back to normal."

"To me," he said, "that looks like light at the end of the tunnel."

Kyle Strober, executive director of the Association for Better Long Island, said, "While businesses are eager to reopen, the economy will not truly reopen until everyone feels safe to be out in public again."

In New York City, Mayor Bill de Blasio announced an eight-member task force expected to deliver a preliminary report to him June 1 on what the city will look like once the pandemic passes.

Among the goals of the task force, de Blasio said, is filling a gap in federal leadership about ways to begin recovery efforts once the pandemic ends.

Cuomo: 'We are back to where we were on March 31' Governor Andrew M. Cuomo on Sunday talked about the declining numbers related to COVID-19 and presented his plans for reopening businesses in phases. Credit: Facebook / Governor Andrew Cuomo

He said the task force's aim will be to "get people back to work" and come up with plans to deal with specific racial and economic inequality issues that have emerged amid the pandemic.

Upstate regions likely to reopen first, then downstate; dependent on hospitalizations declining for 14 days, as well as results of antibody testing and positive tests for COVID-19.

Phase One: Starts sometime after May 15. Construction and manufacturing businesses that operate with “low risk” of spreading the cornavirus can reopen, followed by a two-week assessment period.

Phase 2: Other businesses reopen depending on how essential the business is and how “risky” its operations in terms are of spreading the coronavirus. School reopening assessed.