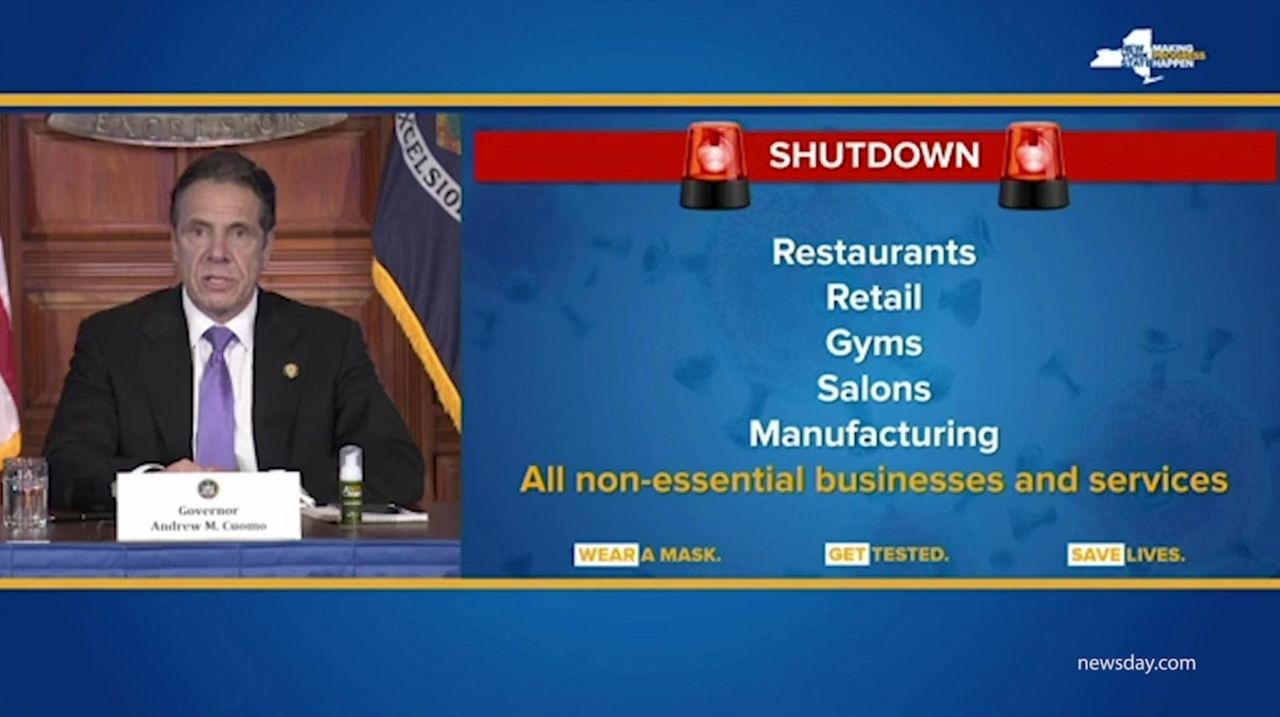 As a critical care nurse at Long Island Jewish Medical Center on Monday became the first person in New York and possibly the nation to be inoculated with the COVID-19 vaccine, the statewide positivity rate grew to 5.66%, hospitalizations increased by more than 300 and Gov. Andrew M. Cuomo warned that a shutdown could loom if the trajectory doesn't change.

The governor announced that the state expected to vaccinate 10,000 people Monday with the Pfizer vaccine as New York races to inoculate as many people as it can amid soaring case numbers.

"New York came out of the blocks very quickly and very aggressively, because the vaccine only works if we take it," Cuomo said at an early afternoon news briefing hours after Sandra Lindsay made history by getting the first shot and giving hope to millions that the nation may finally be starting the long path toward eradicating the deadly virus.

But he also warned that the vaccinations will not be enough to immediately halt the second surge of cases, which are rivaling the numbers the state saw in the spring.

On Monday, the United States surpassed 300,000 deaths from COVID-19, by far more than any other country in the world and five times the number of Americans killed in the Vietnam War. The U.S. is averaging close to 3,000 deaths a day — more than the total number of fatalities from 9/11 attacks daily.

Cuomo cautioned New Yorkers that if they fail to stop holding indoor gatherings at their homes — which now account for about three-fourths of new confirmed COVID-19 cases, according to state data —- thousands more will be hospitalized and die.

"At this rate if nothing happens, we could have 11,000 people in the hospitals and 3,500 deceased," in addition to the nearly 28,000 who have already died of COVID-19-related causes in the state, he said. "If you factor out these numbers, that’s what we’re looking at if nothing changes."

He added: "The increases in hospitalizations could overwhelm some regions if nothing changes by January. That’s the trajectory we’re looking at."

To stem the tide, the governor renewed his directive for hospitals to balance their patient loads and increase capacity by 25%, as well as calling for New Yorkers to cut down on the small gatherings.

Cuomo called on hospitals to prepare to balance caseloads now — that is, to make arrangements to transfer patients to other hospitals if theirs are coming close to being overwhelmed.

The hospitals must "do a better job than they did in the spring. We can’t go through Elmhurst again, which was totally avoidable," he said, referring to the hospital in Queens that became an emblem of the pandemic overwhelming hospitals as refrigerator trucks parked outside to store dead bodies.

Long Island's positivity rate was 5.70% over a seven-day average, Cuomo said, and there were 935 hospitalized COVID-19 patients on Long Island as of Sunday. There are 5,712 hospitalizations statewide, an increase of 302 over Saturday.

Under updated microcluster metrics, a region in New York would enter a "red zone" shutdown if growth in cases and hospitalizations indicates that hospital capacity would reach 90% within three weeks.

Hospitals throughout Long Island were receiving shipments of vaccines on Monday, with plans to begin their own inoculations as soon as later in the day and on Tuesday.

Nassau County Executive Laura Curran said she was "urging all to remain vigilant to help our hospital capacity stabilize. By staying home and avoiding large gatherings, you will not only help save lives and protect first responders on the front lines, but you will help our businesses and schools stay open."

The number of new confirmed cases in test results from Sunday was 739 in Nassau, 1,087 in Suffolk and 3,029 in New York City. Eighty-three people died of the virus in the state on Sunday.

In the city, officials announced that five city hospitals would begin administering the vaccine Monday, followed by 37 more on Tuesday and two more on Wednesday.

"The cavalry is on the way," said Dr. Dave Chokshi, commissioner of the City Department of Health and Mental Hygiene. "It’s good news of course, but we must acknowledge it’s a slow and steady march."

While the city’s precise allotment of the Pfizer and Moderna vaccines — which could receive FDA authorization this week — is unknown, Chokshi said the city has been told to plan to plan for approximately 465,000 doses over the first three weeks of distribution.

Watch: LI doctors discuss the latest on COVID-19 vaccineLocal doctors who are leading the charge on LI in developing a COVID-19 vaccine discuss its status and answer questions. LI health systems, pharmacies say they're ready for vaccineThe larger health systems in the region, including Northwell Health and Catholic Health Services, said they expect to get vaccines from New York City-based Pfizer by next week. Benefits vs. risks: Doctors recommend vaccine, despite side effectsParticipants in clinical trials for Pfizer's vaccine have reported side effects including redness, swelling and pain at the injection site, as well as chills, fever and joint pain, according to documents. See the latest news on the coronavirus, vaccinesKeep up to date with the latest on the global coronavirus outbreak.