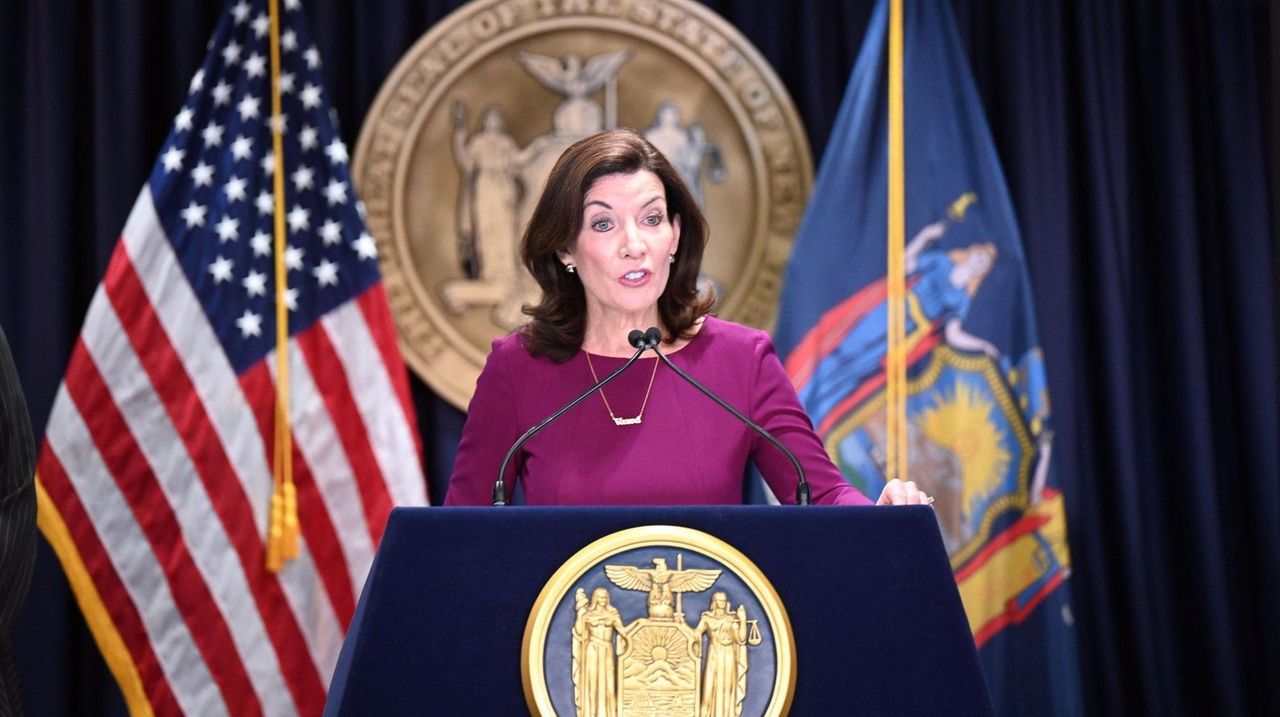 Gov. Kathy Hochul on Thursday morning said a Minnesota resident who traveled to a convention at the Javits Center last month had tested positive for the omicron variant. She later said five cases have been confirmed in New York State. Credit: NY Governor's Office

Five cases of the omicron variant of COVID-19 have been detected in New York State, with four cases in New York City and one in Suffolk County, Gov. Kathy Hochul said Thursday evening.

Two other cases are from Queens, and one is from Brooklyn. The fifth was identified only as New York City.

Hochul and de Blasio said they are assuming there are more cases in New York that have not been identified yet. Omicron originated in South Africa and is classified by the World Health Organization as a "variant of concern."

"Let me be clear: This is not cause for alarm. We knew this variant was coming, and we have the tools to stop the spread," she wrote. "Get your vaccine. Get your booster. Wear your mask."

After she tested positive for COVID-19, Northwell decided to send her sample to the Wadsworth state laboratory to determine if she had the omicron variant since she had recently traveled to South Africa, said Dr. Dwayne Breining, executive director of Northwell Health Labs.

Breining said he wasn’t surprised the variant has turned up in this region.

"Not so surprised really, New York being such a hub for international travel," Breining said. "Once we knew it had gotten out of South Africa, we would have been surprised if we didn’t find it in the region once we started looking for it."

He said it was too early to determine how damaging the variant might be since scientists need more time to study it. The preliminary information, however, "actually sounds pretty good. The cases that we know of have been mild so far," he said. "So fingers crossed. If that continues to be the story, this might not be so bad."

But it is far from certain yet that will be the case, Breining said.

The fact the Long Island woman had mild symptoms could mean either that the vaccines were effective, or the variant is not so severe, or a combination of the two, he said. More study is required to know the answer, he added.

Northwell officials said they send about 10% of their tests to Wadsworth for further testing to determine if variants are present.

Breining said he assumes there are likely substantially more cases of omicron circulating since they only send a small amount of their tests to Wadsworth.

"We certainly haven’t heard the end of this. If this is indeed a more transmissible variant, there’s likely to be spread from this," he said.

Meanwhile, the number of new COVID-19 cases on Long Island soared to nearly 2,000 in what appears to be the start of a holiday season surge. Suffolk County logged 1,079 new cases in test results from Wednesday, while Nassau County registered 890, for a total of 1,969, according to state data. New York City had 2,364 new cases.

Earlier in the day, Hochul reported that a Minnesota man who tested positive for the omicron variant of COVID-19 was at the Jacob K. Javits Convention Center in Manhattan in November. The man attended the Anime NYC 2021 convention, showcasing Japanese pop culture, held Nov. 19-21, Hochul said. He was tested on Nov. 24 in Minnesota after developing COVID-19 symptoms.

The governor urged anyone who was at Javits between Nov. 18 and Nov. 22 to get tested. Officials have a list of the people who attended the event, and will be contacting them, she said. Most attendees had to be vaccinated to get in.

The Minnesota Department of Health said the man who tested positive had been vaccinated. He developed mild symptoms on Nov. 22.

To enter this year's Anime NYC event, attendees who were 12 years of age and older needed to show proof they had received at least one dose of the COVID-19 vaccine. Those under 12 who were not vaccinated were required to show proof of a negative COVID-19 test. Kids under 5 could attend without a test result.

Anime NYC said it attracts fans from all 50 states and more than 15 countries. This year's event drew about about 50,000 people.

Not 'defenseless against variant'

Hochul said earlier Thursday in a press briefing that the state is not "defenseless against this variant, and I want everyone to know to have the confidence that we can handle this."

Hochul said she is not considering closing schools, stores or other businesses the way the state did at the start of the pandemic in March 2020.

"I will not overreact and send this economy spiraling out of control once again, because it’s taken so long to get back where we are," she said.

The United States recorded its first confirmed case on Wednesday. A vaccinated traveler who returned to California after a trip to South Africa on Nov. 22 developed mild symptoms and tested positive on Monday.

Meanwhile, New York State continues to see a rise in COVID-19 case numbers and hospitalizations, Hochul said, pointing out Long Island and areas upstate. New York City, which unlike the rest of the state requires people to show proof of vaccination for everything from entering restaurants to attending Knicks games, has the best COVID-19 indicators in the state.

In state data released Thursday, the seven-day average for positivity in testing for the virus rose to 5.5% on Long Island. It was as low as 2.08% on Oct. 28.

Statewide, hospitalizations of patients with COVID-19 rose by 71, to 3,093. A total of 49 people died on Wednesday of causes linked to the virus, including two in Suffolk and one in Nassau.

Dr. Lance Becker, chairman of emergency medicine at Northwell Health, said COVID-19 hospital cases were already increasing gradually before the omicron variant emerged — and that it likely won’t be the last variant.

"Over the last several weeks before the omicron variant was even described, we had already been seeing an uptick. And I wouldn't go so far as to call it a wave, maybe I would call it a wavelet," he said.

He complained about people not getting vaccinated, wearing masks or socially distancing.

"I'm just so tired of having a sick person come into the emergency department and then to have their family come afterward and say, 'He didn't want to get vaccinated. He really felt like it was the wrong thing to do for various reasons,’" Becker said.

When asked whether the state should enact mask and vaccine mandates in regions where COVID-19 cases and hospitalizations are highest, Hochul indicated she does not plan to do so.

The Minnesota resident who tested positive for the COVID-19 omicron variant had attended the Anime NYC event at the Javits Center in Manhattan in November.

Gov. Kathy Hochul urged anyone who was inside the Javits Center from Nov. 18 to 22 or attended the event to get tested for COVID-19.

Hochul said she doesn’t have any plans to enact mask or vaccine mandates in regions of the state where COVID-19 cases and hospitalizations are increasing.

Free counseling to focus on 'results of COVID'As the omicron variant reaches Long Island, Sayville-based Community Ambulance Co. is partnering with Youth Enrichment Services and NY Project Hope to offer confidential emotional support Saturday. NYC safer than Long Island? COVID-19 numbers say soLong Island's COVID-19 positivity level is more than double the rate in New York City, once a global epicenter of the pandemic, state data shows. At Vaxmobile, demand rises for COVID shotsThe mobile unit was fully booked for its 30 slots Monday when it visited Baldwin High School. On Wednesday, a line formed outside the bus when it opened at 10 a.m. in Island Park, hospital officials said.  Omicron: Here's what you need to knowHere are answers to some questions about the new fast-spreading coronavirus variant that has caused worldwide worry.