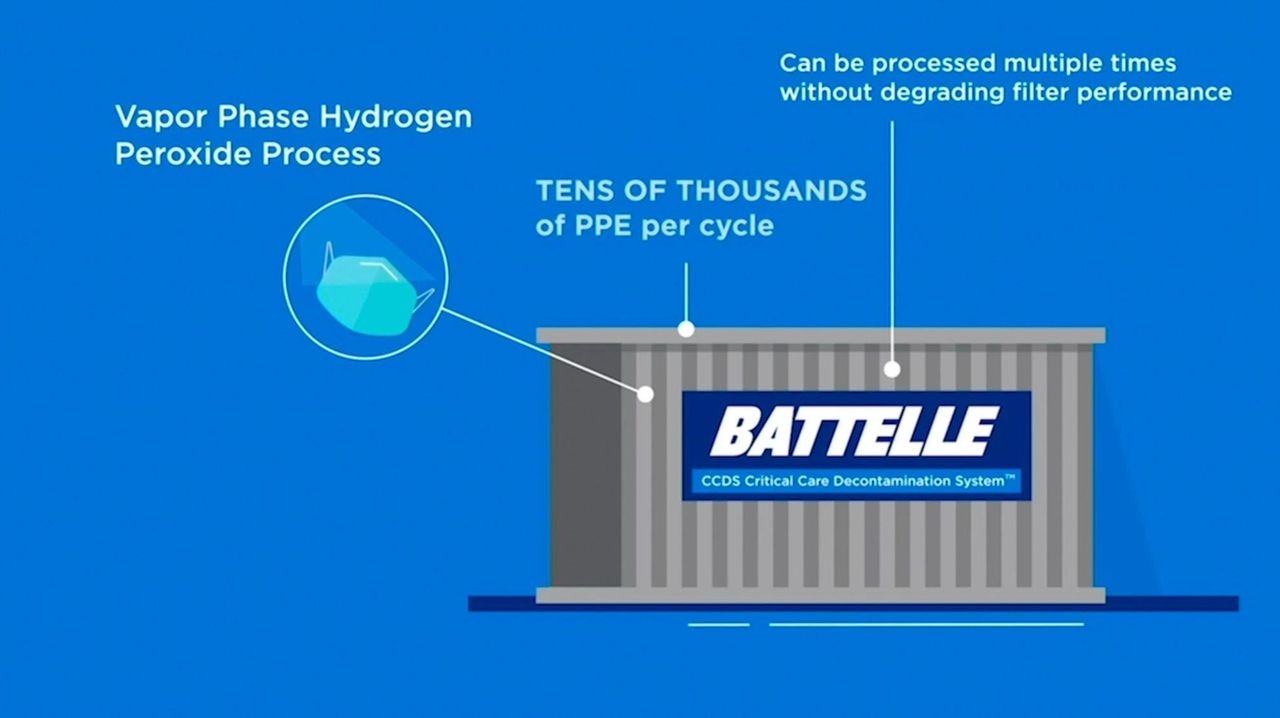 Two machines being installed at Stony Brook University will use vaporized hydrogen peroxide to decontaminate up to 80,000 N95 respirator masks a day, allowing as many as 20 reuses of a mask for each health care worker treating COVID-19 patients.

The machines, from the Battelle Memorial Institute, a Columbus, Ohio-based science and technology nonprofit, are housed in shipping containers that were converted into airtight chambers, said Kevin Good, a research leader at Battelle who is supervising the setup at Stony Brook. The goal is to begin decontaminating masks in the next few days, he said.

The machine, called a critical care decontamination system, is believed to be the largest N95 mask decontamination device ever built, Battelle spokeswoman Katy Delaney said. Stony Brook has two of the eight machines that are expected to be in operation in the next few days, with the rest at the nonprofit’s Columbus headquarters and in Seattle, she said. Other locations may be added later, she said.

Stony Brook University Hospital will send its masks to the machine, and with the capacity to decontaminate so many masks so quickly, other hospitals also will be able to use it, Delaney said.

Hospital officials, health care workers and political leaders have said they are worried whether there will be enough N95 masks for the duration of the pandemic, and hospitals are desperately trying to conserve those they have.

Some Long Island hospitals already decontaminate masks, but on a much smaller scale.

Each of the six Catholic Health Services of Long Island hospitals has at least one machine the size of a microwave oven that can sterilize three masks a minute with ultraviolet light, said Dr. Patrick M. O’Shaughnessy, executive vice president and chief clinical officer for the system.

Mount Sinai South Nassau hospital sends 300 masks at a time to Oregon for sterilization with ethylene oxide, said Paula Zweig-Cohen, director of infection control for the hospital and a registered nurse. The turnaround time is several days, she said.

The hospital hopes to gain access to the Stony Brook machines, which would be just over 40 miles away rather than nearly 3,000.

“It would be a game changer if we could reprocess them quickly and get them back into use,” she said.

Stony Brook came to the attention of Battelle because Battelle manages Brookhaven National Laboratory with The Research Foundation for The State University of New York, Good said. Stony Brook is the largest academic user of the laboratory, according to Brookhaven.

The liquid used in Battelle’s process is more powerful than the hydrogen peroxide in bathroom medicine cabinets.

The machine vaporizes the hydrogen peroxide, and a fan-type device distributes the vapor throughout the chamber, ensuring that all the masks get a thin coating of hydrogen peroxide condensation, Good said.

“Hydrogen peroxide is an antiseptic, so it’s naturally going to kill everything,” he said.

The process lasts about three to four hours and ends with a blower removing the hydrogen peroxide from the masks, Good said. Each machine holds up to 5,000 masks.

"It's just being used on a larger scale" with the N95 masks, he said.

The machines arrived at Stony Brook on Saturday, he said.

Eleven Battelle employees will staff the machines, he said. Costs are yet to be determined, Delaney said.

The U.S. Food and Drug Administration on Sunday approved the use of the machines outside Battelle’s headquarters, after President Donald Trump tweeted “@FDA must move quickly!” earlier that day.