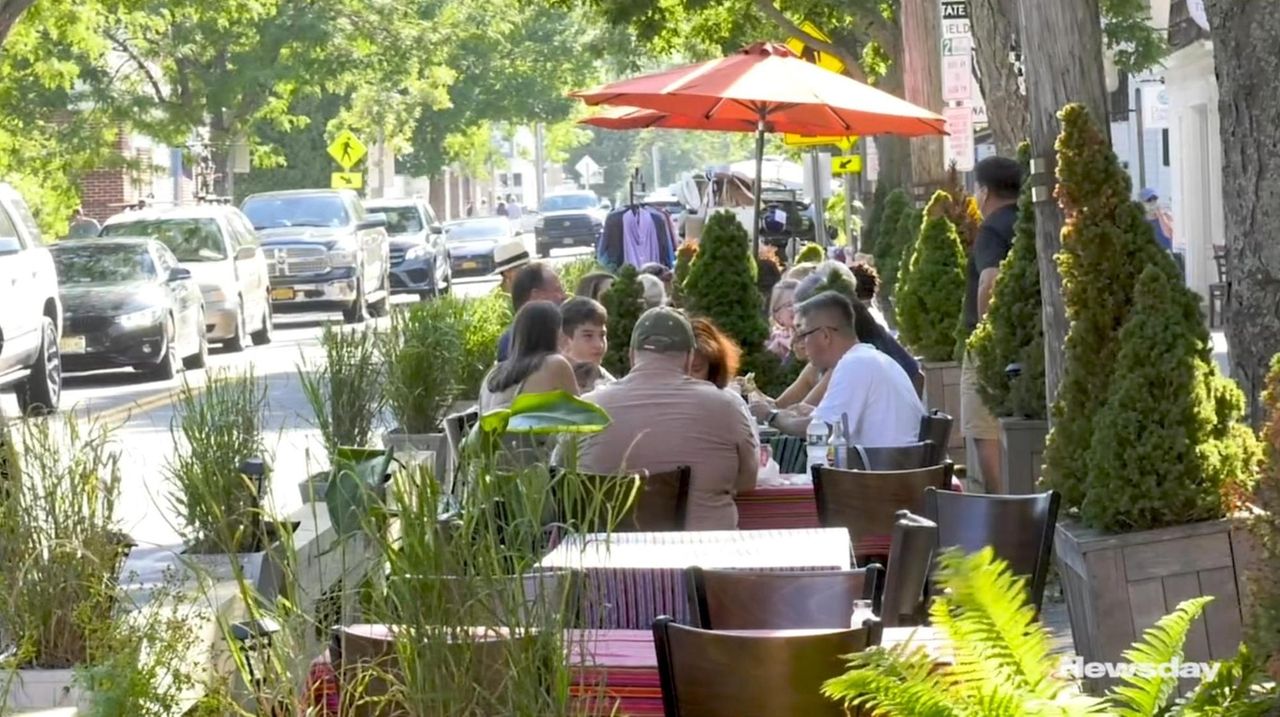 Aerobics in a parking lot. Sunday strolls down the middle of the street. A three-course meal on a road shoulder.

The coronavirus pandemic, along with the risks it poses to gathering indoors, has forced Long Islanders outside into spaces normally occupied by cars. Some communities are all for it, temporarily converting streets and parking spots into spaces for people to eat or mill about outdoors at a safe distance from others.

These ad hoc plazas are popular, officials and business owners say, which is shifting local attitudes about the value of public space — and about how much of it is given over to cars.

New York City and other urban centers also have converted roads into pedestrian spaces since COVID-19 struck. But observers say such initiatives are more unusual in suburbs such as Long Island, which was shaped by land-use principles that prioritized cars at every turn.

“It is my hope that some of this can continue when life gets back to its new normal,” said Nassau County Executive Laura Curran, whose office established a program this summer to fast-track applications from local municipalities to close county roads for pedestrian uses. Perhaps, Curran said, “We could make some of this permanent here, too.”

With little precedent for the challenges posed by the pandemic, these local initiatives have taken varied forms.

Towns and villages say local businesses are using at least 400 parking spaces to set up tables, racks of clothing or whatever else could help recoup months of slumping revenue. They've also repeatedly closed more than a dozen roads in downtowns stretching from the city limits to the East End.

The small North Fork village of Greenport has blocked off, with large timbers, a quarter of the some 200 street parking spaces downtown, creating 9,000 square feet of outdoor space, dubbed “parklets,” for local businesses to use.

“They’ve never done anything like this where it’s just been kind of rededicated space for a period of up to four months,” said Richard Vandenburgh, the co-owner of a local brewery and president of the village Business Improvement District, which spearheaded the effort. “That’s never happened before.”

The village also closed a lane of traffic along one heavily used block of Front Street. Shoppers and diners have filled the extra space, to the relief of local businesses, Vandenburgh says.

“Some are saying, had we not done this, they probably would’ve had to shutter their doors altogether,” he said.

“You’ve got the wind, the breeze, the air — it’s not so bad at all,” said Dennison Silvio, the owner of Sportset Health & Fitness Club. “No one’s parking there, so it’s totally empty anyway."

Virginia Kornfeld of Oceanside was one of about 20 people doing squats and jumping jacks in a parking lot Body Sculpt class there one recent morning as Long Island Rail Road trains clattered by overhead.

“It’s a little weird,” she said, but certainly better than the virtual classes she had been doing. “It’s just not the same doing it online. I’m tired of looking at the walls of my bedroom.”

Patchogue is one of many Long Island communities regularly closing downtown blocks to car traffic because of the pandemic. Restaurants have taken advantage, filling the South Shore village’s Main Street with tables every Sunday.

“Just seeing people sitting in the street, it’s a different feel,” said Charlie Gomes, general manager of the restaurant Arooga’s, which had several tables on Main Street one recent Sunday. Gomes compared it with the outdoor cafes of European cities.

That model of public space was far from the minds of the builders of Long Island’s highways, low-density neighborhoods and shopping malls surrounded by oceanic parking lots, those who’ve studied Long Island’s history say.

“When the ‘Car Age’ happened across the country and Long Island, we accommodated the car over the built environment,” said Eric Alexander, director of Vision Long Island, a nonprofit planning group. “We sacrificed a lot of our downtowns and our gathering places.”

But, he noted, some Long Island communities were reconfiguring their downtowns to make them more amenable to those without cars before the pandemic hit. He called the uptick in road and parking conversions since the pandemic an “acceleration” of that trend.

“It’s a natural progression,” he said. “Only, it happened in an unnatural fashion.”

That progression may continue even after the pandemic.

Vandenburgh says he hopes Greenport will allow the Business Improvement District to install the parklets for the entire summer season next year, even if COVID-19 is no longer a threat. After some initial skepticism about the installations, most of the community likes them, he says.

“It could have a long-lasting impact on how Greenport operates in years to come,” he said.

In Patchogue, Mayor Paul Pontieri says he could imagine closing Main Street for outdoor dining even once COVID-19 is under control.

“The pandemic is systemically changing how we look at how we use our properties, how we use our streets, and how the businesses are going to survive over time,” he said. “It's up to the leadership in all these municipalities, whether it's villages, towns or the county for that matter, to really take a look at what’s a different way to do it and a better way to do it after we come out of this.”