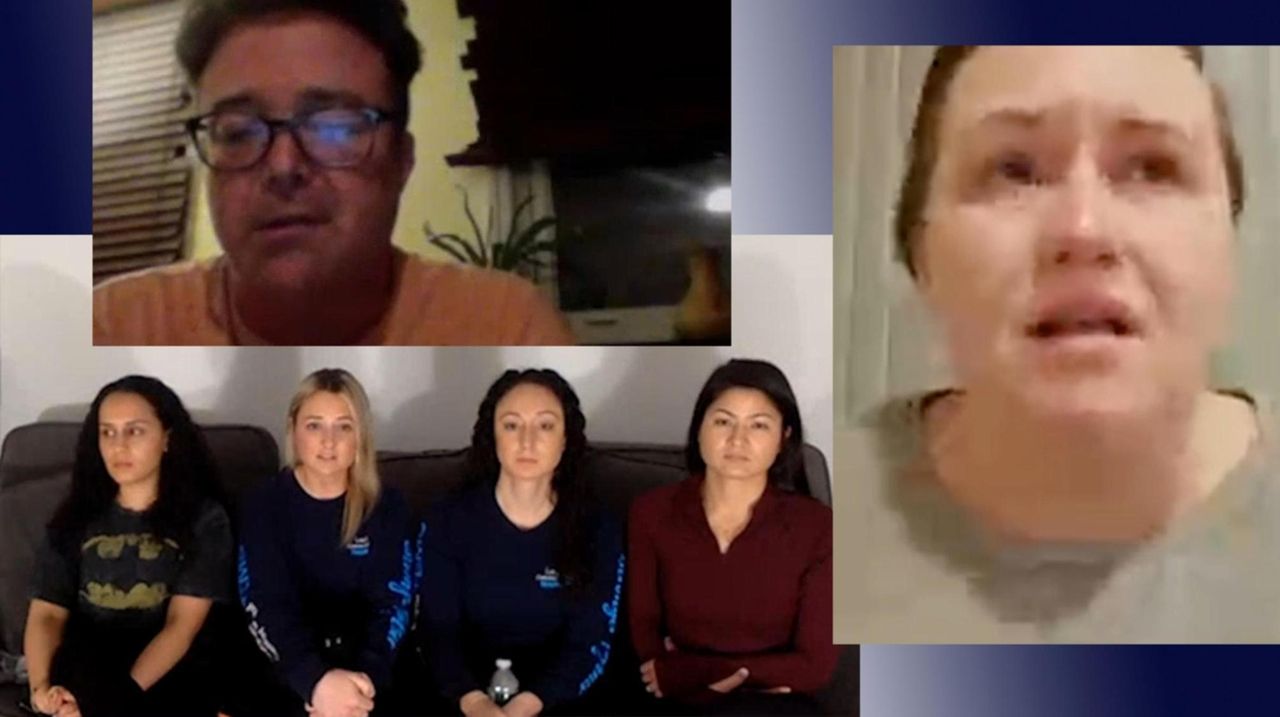 Emergency room nurses from Long Island Community Hospital in East Patchogue speak with Newsday about the "war zone" they experience on the front lines of the COVID-19 pandemic.  Credit: Newsday / Jeffrey Basinger

That’s how Long Island emergency room nurses on the front line of the COVID-19 pandemic say they’re feeling as they care for the influx of patients suffering from the novel coronavirus.

"We’re walking into work completely fearful and feeling very defeated before we even get there," Abigail Desmond said. "Every single day, we are so uncertain what will happen. Every single day, this is changing. That is the scariest thing for us."

Desmond, 26, of Bayport, and six of her fellow ER nurses from Long Island Community Hospital in East Patchogue expressed the emotional, physical and mental toll of working amid the pandemic during a group video interview with Newsday on Thursday night.

"I feel like we’re fighting a war that unfortunately you’re not prepared for," said Stephanie Costa, 27, of Patchogue. "You feel hopeless."

"We’re not sleeping," said Michelle Farid, 28, of Mastic Beach. "The night before I work, I’m up every single hour on the hour, just thinking, ‘Oh my God, I have to go in. Oh my God, what am I going to deal with today? Am I ready for this?’

"In every single way, it's mentally, physically, emotionally draining."

Long Island Community Hospital, Suffolk’s only independent hospital, has 250 beds and serves eastern Long Island. Spokeswoman Katherine Heaviside said Thursday there were about 100 people either diagnosed with COVID-19 or showing symptoms. She hailed the hospital’s health care workers for "brave and inspiring work on the front lines."

The nurses said what used to pass for normal in their emergency room had changed drastically in just a few weeks. They struggle to comprehend the reality of how quickly people are getting sick, and some who then die.

"We have patients coming in and one second you’re talking to them and the next you're intubating them," said Tatianna Young, 27, of East Moriches. "It’s like, ‘How did this evolve so quickly?’ It’s scary. We’re not used to seeing stuff like that."

With every disease, broken bone or stomach ailment, there’s a playbook they follow to provide care. But with the coronavirus, they said, the rules seem to change daily.

They especially get angry when they hear people say older people are at risk of getting really sick with this virus.

"The virus doesn’t discriminate young or old, it’s everybody," Costa said. "Even people with good immune systems or no prior health history at all."

"It’s scary," Desmond said. "And we’re ER nurses. We don’t scare easily. And this is scary."

They said they keep coming back to work and put themselves at risk for two reasons: the bond they have with their co-workers and the obligation they feel to provide care to patients.

"These patients are alone. They’re all by themselves. They don’t have any family there," Desmond said, noting how visitors are not allowed, which helps prevent the spread of the virus.

"We get a patient and we quickly run into the room and get a phone number so we can contact someone," she added, "because we don't know if these patients are going to crash in five minutes."

The nurses said it was not so much the number of sick patients that was alarming. It’s the number of people whom they described as really sick.

"We went into nursing to help people, and now we’re at a point where we feel like we can’t help people," Costa added. "We’ve done everything we can, we’ve exhausted all our resources, and they’re still critical and dying. You feel like your hands are tied. It’s hopeless."

They’re worried about their own health as well. The nationwide shortage of personal protective equipment such as masks and gowns has led hospitals such as LICH to turn to methods to preserve the life span of what had been one-time-use items.

Now the nurses scrub these items clean and wear them for as long as they can. This has them worried, considering how contagious the coronavirus is.

Vincent Crane, 47, of Farmingville, added, "It’s like walking into a fire with nothing on."

Some of them are isolating themselves from their families at home.

Desmond, a single mother, has a daughter who is staying with her parents. She wore a mask when she saw her daughter on her 8th birthday Saturday.

"Most of us haven't hugged or kissed our kids in a long time," she said.

Auteri returned to work from maternity leave March 1 and said she wore a mask at home when she was around her 4-month-old daughter.

It means she can hold her daughter, but with limitations.

"I can't get too close to kiss her because who knows?" she said. "It’s heartbreaking."

Still, she said she told her husband she would work until she got sick.

"I feel like I’m on the front line of a war that I didn’t sign up for," she said. "I came back from maternity leave and it was like, bam, go into the trenches. You have no choice. You’ve got to do it. You have to take care of these people on your shifts. They’re relying on you."

Some of their fellow nurses have gotten sick with COVID-19. They’re worried they may be next.

Their days are filled with constant anxiety, at home and at work. They try to get through it by reminding themselves of the suffering their patients are going through.

"We try to keep your cool as best you can," Auteri said. "But deep down inside, I'm so full of anxiety in those rooms."

Costa said the best way to describe life in the emergency room was "surreal," as if she was stuck in a dream and none of this was real. She said she often found herself coping during the day by asking her colleagues, "Is this real life?"

"You wake up in the morning with a pit in your stomach," Costa said. "You don’t know what you’re going to see today. The best way to explain it right now, it looks like a movie. It doesn’t look like our ER that we’re used to. The unknown is scary."

Crane said the worst part about working amid the virus was the knowledge that it exists all around them. He described it as going to war against an enemy that was invisible. "It’s something you can’t see," Crane said. "But you know that it’s there."

He said it was not just nurses that had to deal with this constant anxiety. He said doctors, respiratory therapists, hospital engineers and custodians were there doing their jobs for the good of the patients and hospital staff while dealing with the same anxieties.

The nurses said they shudder when they see people complain on social media about having to stay home. It makes them think about all the sick people they care for. "You’re home and you’re safe," Costa said. "You’re not in the hospital on life support."

The nurses also worry what their emotional state will be like when life gets back to normal, whenever that is.

Desmond broke down in tears discussing a conversation she had with her parents. She said she told them, "You’re going to need to help me, because I’m not going to be the same."

Auteri said when she returned from maternity leave on March 1, the emergency room already had a far different feel from the one she left in October.

There's now no resemblance to how it used to be.

"It’s really heartbreaking to see what it was and what it is now," Auteri said. "Will it ever be the same? Who knows? And it’s scary. Because I love being an ER nurse. I love it.

"It’s scary. I’ve never been so scared in my life."