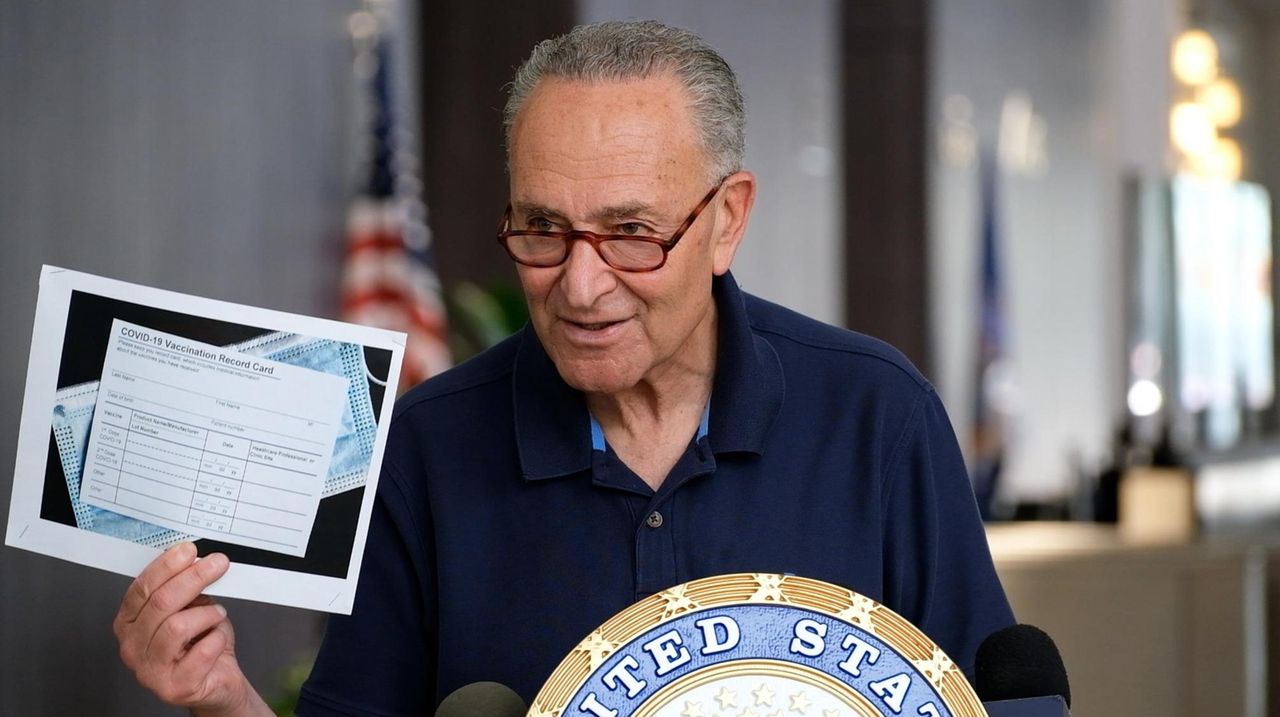 "Some people, rather than get the vaccine, which is free, are paying money for a fake card, and risking prosecution, because it's against the law, who could be that dumb?," Sen. Chuck Schumer (D-N.Y.) said, calling for a crackdown on fake vaccine cards. Newsday's Steve Langford reports.  Credit: Newsday / Raychel Brightman; Craig Ruttle

Schumer’s office said he wants the Federal Bureau of Investigation and Department of Homeland Security "to team up and launch a crackdown" against the "horrible people" involved and "get the word out that selling or buying the counterfeit cards" is a crime punishable by fines, prison or both.

"People are now manufacturing and selling fake COVID cards, even though it’s a crime, and this is incredible," Schumer (D-N.Y.) said Sunday at a news conference near his Manhattan office. "Some people, rather than get the vaccine, which is free, are paying money for a fake card and risking prosecution 'cause it’s against the law. Who can be that dumb?"

The FBI and Homeland Security Department did not respond to messages seeking comment.

Holding a blown-up vaccination card, Schumer, the Senate majority leader, cited a report that a user on the encrypted messaging app Telegram was selling the cards, and another report that the U.S. Customs and Border Protection agency earlier this month seized shipments of fake vaccination cards at the Port of Memphis from China.

"A lot of these cards are made in China. There’s always people from China seeming to take advantage of us, and the Chinese government doesn’t come down on them," Schumer said.

He added: "Is this an epidemic right now? No. Could it become one? Absolutely, if the authorities do nothing about it, so we have to nip it in the bud."

There are mandates across the United States requiring vaccination in order to access everyday activities like indoor dining and entertainment venues, including a mandate from Mayor Bill de Blasio in New York City.

And a growing number of colleges and universities are announcing mandates, including, locally, Adelphi University, Molloy College, St. Joseph’s College, SUNY and CUNY.

Several colleges are planning to use the honor system to make sure students are submitting genuine proof.

But St. Joseph’s College in Patchogue spokeswoman Jessica McAleer said the college has hired CastleBranch, a screening company based in North Carolina, to scrutinize submitted vaccination proof to be "verified across public records in accordance with state and federal privacy laws."

It’s unclear how exactly the company will do so, but an article last month in the Morgan State University newspaper The Spokesman says that after an applicant submits alleged proof, CastleBranch "employees will then verify the testing site at which you were vaccinated."

In May, a Levittown man was arrested on charges that he stole dozens of blank vaccination cards from his job at a CVS store, according to the Nassau County Police Department, which alleged that he planned to sell them to his unvaccinated friends. Charges against the man, who allegedly had eight pre-filled vaccination cards and 54 blank ones, include criminal possession of a forged instrument and petit larceny. He was freed pending future court proceedings, according to online court records.

A vaccine card lists the person's name, date of birth and when and where the person got a shot or shots, along with vaccine batch information.