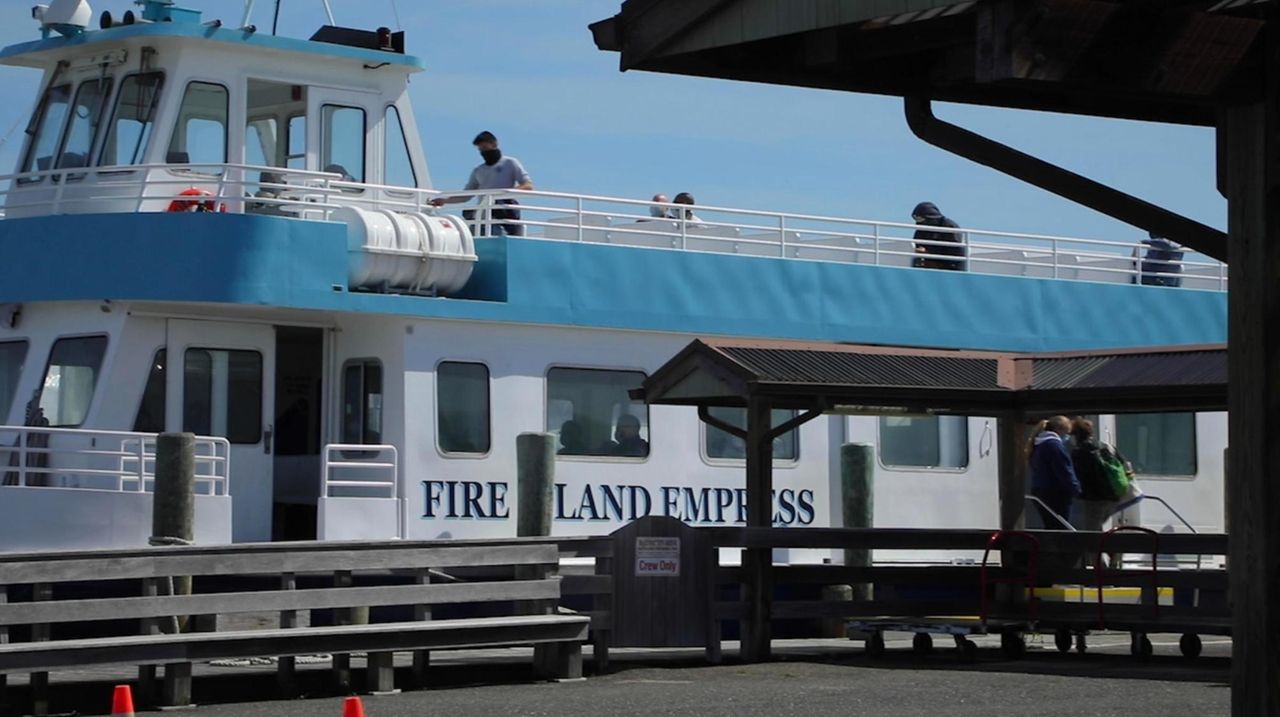 Ken Stein, president of Sayville Ferry Service, says business is hurting as passenger traffic is way down because of the coronavirus pandemic. Credit: Newsday / Yeong-Ung Yang

Chillier than normal temperatures, ominous gray skies and coronavirus restrictions led to mostly empty Fire Island ferry boats this weekend — normally one of the busiest of the year as Long Island gets a head start on summer.

Ferry owners whose businesses have survived hurricanes, nor'easters and previous economic recessions said they had never seen a Memorial Day weekend with as few customers as they did this year. Even a few hours of sunshine on Monday wasn't enough to bring out day-trippers and beachgoers, they said.

“Worst in history," said Dave Anderson, general manager of Fire Island Ferries in Bay Shore. "It doesn’t even stack up with our worst year ever.”

Ferry operators knew social distancing guidelines mandated by the COVID-19 pandemic would depress ridership. But the weekend fell short of even their modest expectations.

Ridership on boats operated by the three major Great South Bay ferry companies averaged about 25% to 30% of capacity each of the three days. Sayville Ferry saw its largest crowd on Sunday morning when 75 people boarded a vessel that could hold more than 300.

“People we normally would have had for the restaurants and the bar scene [were] … literally nonexistent," said Ken Stein, president of Sayville Ferry, which serves Cherry Grove, Fire Island Pines, Sailors Haven and Water Island. "I probably could have had everyone for the day on one boat.”

Ferry companies have made efforts to reassure anxious customers by requiring the wearing of face coverings and cleaning boats from stem to stern.

But ridership and revenue this spring are down by about half, boosted only slightly by heavier-than-normal traffic in March, when some mainland residents sought refuge in their Fire Island summer homes.

Aside from private boats, ferries are practically the only way most homeowners, renters and day-trippers can get to communities such as Fire Island Pines, Atlantique, Ocean Bay Park, Kismet and Water Island.

Hand sanitizers are available on board, and passengers are asked to wash their hands and remain 6 feet apart.

But that's difficult on a ferry boat.

“Social distancing is a challenge," Stein said. "It may not be attainable on a ferry. People are sitting on benches that are not designed for social distancing.”

Ferry owners said they had planned to restrict capacity to 50%, but they needn't have bothered: Customer demand has been so poor that occupancy rarely exceeds 40%, they said.

“Ridership is way down. We’ve only had one trip where it’s been close to capacity on the boat,” said Charles Sherman, president of Patchogue-based Davis Park Ferry. “It’s killing us. We’re a small company. … You only have so much time in the summer.”

Besides coronavirus restrictions, foreboding skies much of Memorial Day weekend and a Saturday rainstorm likely scared off holiday travelers.

“The weather all around was pretty poor," Sherman said. "If it’s bad in the morning, no one goes in the afternoon.”

Anderson said Tuesday he would have to lay off an undetermined number of workers. Stein and Sherman said they had hired far fewer seasonal employees than they normally would.

“I’ve been through every hurricane,” Anderson said. “Never have I had to do something like this.”

People who do travel to Fire Island may find a different world from the one they're accustomed to.

Usually a haven from the realities of life on the mainland, Fire Island is imposing the same restrictions as other Long Island communities. Some types of recreation will be barred or modified, and restaurants are serving only takeout meals — if they're open at all.

Boardwalks and docks on Fire Island pose a particular challenge. Typically only 6 to 8 feet wide, they don't allow people to pass in different directions without coming within 6 feet of one another, so communities are requiring face coverings when social distancing is impossible.

“It will be different,” Saltaire Mayor John A. Zaccaro Jr. said. “I think that all the different activities that will be permitted are going to face restrictions.”

In Cherry Grove, gay pride events next month and the traditional "invasion" of Fire Island Pines on July 4th weekend have been canceled. No decision has been made on the annual Miss Fire Island contest, usually held in September, said Diane Romano, president of the Cherry Grove Community Association.

The Community House, the centerpiece of Cherry Grove's social scene, may not open until July, she said.

"I’m sure we’re going to go through June without too much social activity," said Romano, a retired advertising and publishing executive. "A strange way for us to live.”