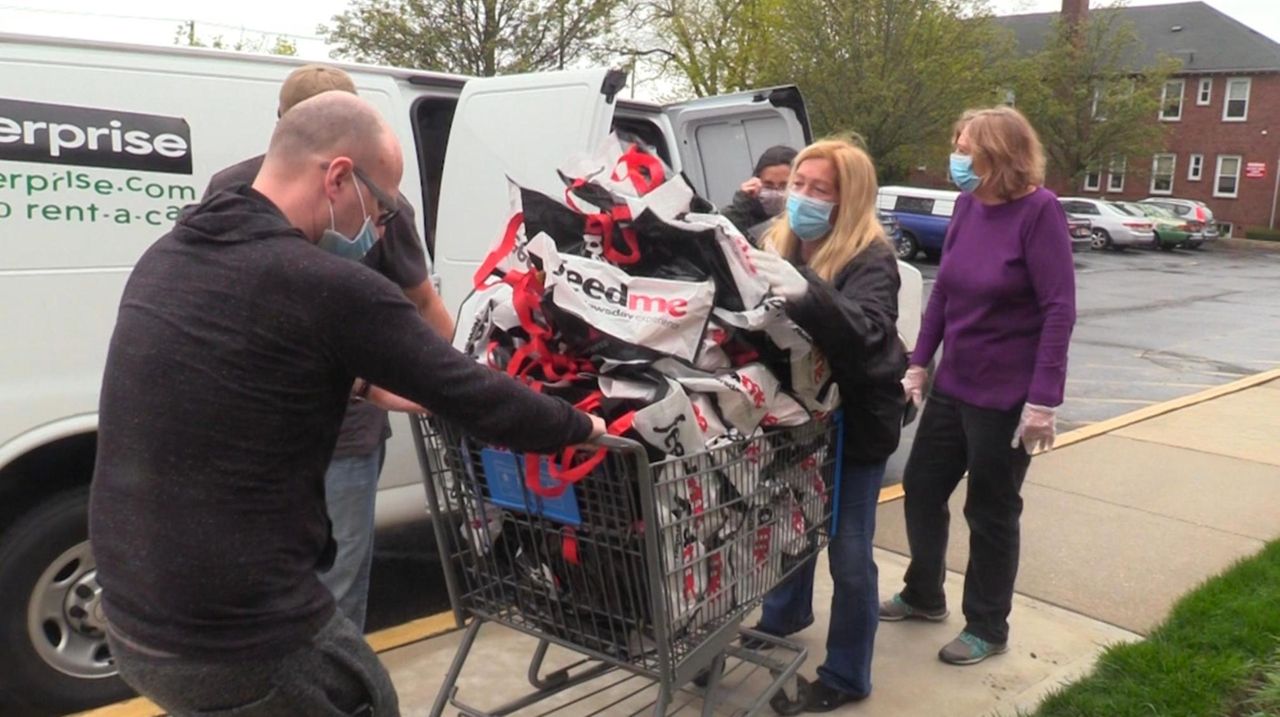 Demand for food from Long Island food banks has increased by 40% in the past two months. Long Island Cares brought food and masks to a senior housing facility in Amityville on Wednesday. Credit: James Carbone

Two Long Island food banks will get part of $25 million in emergency funding to purchase food from New York farmers to distribute to hungry families on Long Island.

Gov. Andrew M. Cuomo announced the funding this week as part of a program called “Nourish New York” to pair downstate food banks in Westchester, New York City and Long Island with upstate dairy farmers who have been dumping excess milk and crops.

“The funding will ensure that New Yorkers who need it most have access to food and other commodities all while supporting our New York’s farmers and producers,” state health department spokesman Jonah Bruno said.

Hauppauge-based Long Island Cares and Bethpage-based Island Harvest, which both distribute food to Nassau and Suffolk counties, will receive a portion of the state funding.

“The demand is far in excess of what anyone had prepared for,” Kaminsky said. “Whatever funding we get is critically necessary and will never be enough. Donations have started to slow at the time when demand is the greatest and Long Island faces a real challenge.”

Paule Pachter, director of Long Island Cares, said food banks are waiting to find out how much money Long Island will receive. He said the organization will aim to support New York farmers and dairies. The food bank has committed to buying 1,000 pounds of fresh fish from Long Island fishermen each week that will be packaged by local restaurants.

Long Island Cares has also received $4 million in pledged USDA funding and private giving, including donations from Billy Joel to support a temporary freezer to allow workers to deliver food in Hampton Bays.

In addition to 1,500 seniors served every week, Long Island Cares is now helping families that may be dealing with layoffs or furloughs. The food bank is also serving impoverished seniors who relied on regular shipments through the state’s Commodity Supplemental Food Program, which ended an emergency state contract at the end of March.

Randi Shubin Dresner, director of Island Harvest, said donations slowed as soon as the state began to lock down in early March. The food bank switched its focus from relying on donations to purchasing food and increased purchasing by 1,000% compared with the same point last year. Island Harvest distributed one million pounds of food within the first month of the pandemic.

“Donations dried up very quickly,” Dresner said. “All of a sudden we were not getting donations from the supply chain. The community wiped everything out from grocery stores and wholesalers and distributors were wiped out and it goes down the whole supply chain.”

Island Harvest has purchased $2 million in supplies and started creating food boxes. At lines in Riverhead, Hempstead, Uniondale and Roosevelt, the food bank has attracted more than 1,000 people on foot and by car, with about 200 people usually turned away when supplies ran out.

The Adelante food pantry, which serves Central Islip and Brentwood, offers meals to about 40 seniors daily. Director Pilar Delgado said her organization does not receive state or federal aid. The group is partnering with the Salvadoran Chamber of Commerce to deliver food.

Adelante's pantry is open once a week on Thursdays, but they usually run out of food by midweek.

"The amount of people calling is heartbreaking," Delgado said. "By the time Tuesday morning comes around, we’re maxed out for the number of people we can serve. We don’t want a family to show up and not have enough food to give them."