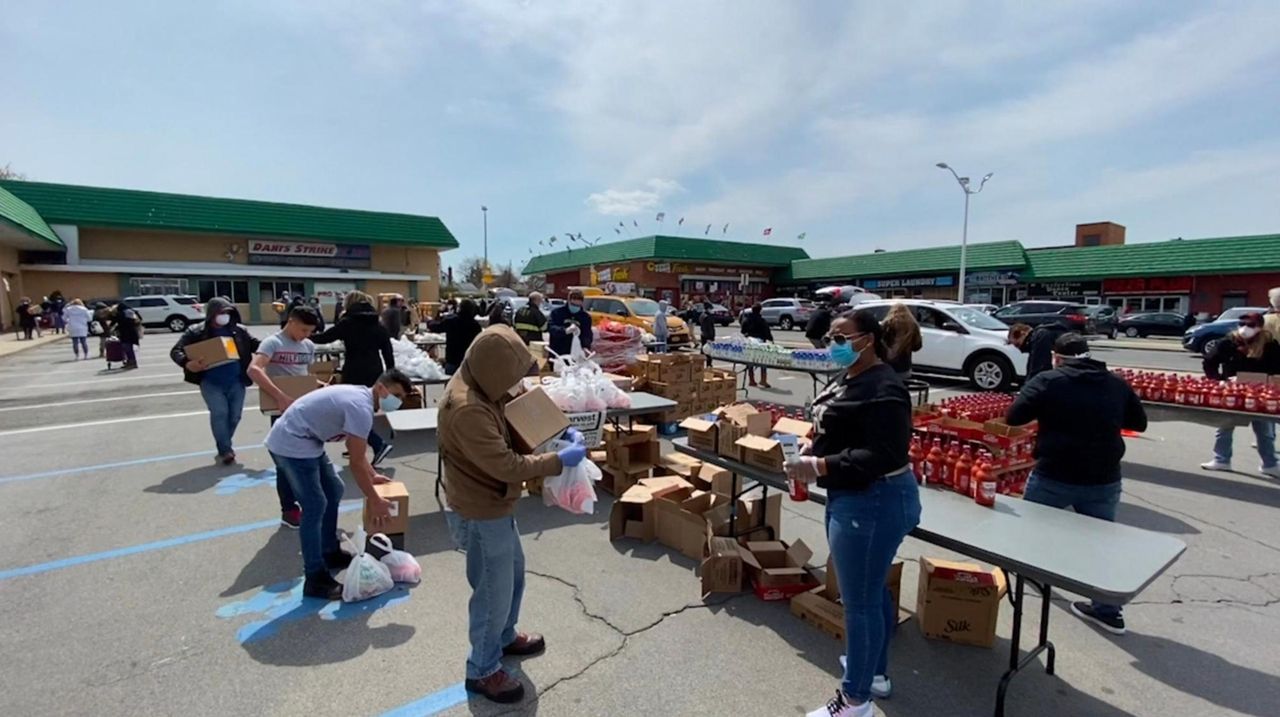 LI food pantries report seeing an increase of people needing food, many coming for the first time. Island Harvest food bank distributed food to those who needed it on April 17 in Elmont. Credit: Howard Schnapp

Many food pantries on Long Island report seeing increases in the number of people seeking their help — some for the first time — as people have become unemployed or furloughed because of the coronavirus pandemic.

"I would say mid-March is when we really started seeing an uptick," said Catherine Albanese, coordinator of Care and Youth Services at the Iovino South Shore Family Center in Bay Shore, a program of the Family Service League. "We served 485 individuals at our [food] pantry in Bay Shore, versus January, which was 391, and February, 367. So far in April, going from the 1st through the 15th, we have already served 225 individuals."

And for the Island's food banks, the increases have been dramatic. They have had to purchase more food to provide to other nonprofits' food pantries at a time of increased need, and for the food banks' own food distribution programs.

A recent community food distribution the Island Harvest food bank did in Elmont attracted about 300 cars and another 425 people who walked to the distribution site, said president and chief executive Randi Shubin Dresner.

"We had a long line of people," Dresner said. "They were waiting long before we got there … If we had a drone or helicopter, you would've seen a long line. It was wrapped around Elmont Road. The cars were backed up."

Paule Pachter, chief executive of Long Island Cares food bank, said there had been a 64% increase in the number of people coming to six food pantries the food bank operates.

"In March of this year, 7,233 came to our six satellite locations. That is compared to 4,395 that visited us last year at the same time," Pachter said. "That’s where the 64.6% increases comes from. Of the 7,233 people, 2,212 — or 30.6% — are people who have never been to our satellites." He added a seventh pantry in Valley Stream had only been open two weeks and was not reflected in the March statistics.

Pachter added: "They are victims of COVID-19. They lost their job. They’ve been furloughed. They just have never had to go for help before. This is the first time, because of the self isolation, because they can’t find essentials in their supermarket, they’re turning to the pantries to see what we have. And that’s perfectly OK."

Dresner said current food purchases for Island Harvest had increased 1,000% over this time last year. "We have spent close to $1 million for food just since the beginning of March," as it quickly shifted to what Dresner called a COVID-19 response. She said the food bank annually served 300,000 people on Long Island.

"When the coronavirus hit, we changed our model very quickly," Dresner said. "We opened up our emergency resource center. All programs switched to COVID response work." She said the distribution model had changed and the food bank would be expanding to more locations.

Hundreds of local food pantries get food from both food banks, and several reported more people were seeking assistance.

"Here at the office, the majority of the calls that we receive are from individuals seeking a variety of assistance, and one of them is [for] the food pantry," said Norma Alvarado, a caseworker specializing in outreach and community advocacy at Adelante of Suffolk County, a nonprofit serving Latinos and others with a wide range of services. She said before the virus struck, the food pantry in Central Islip typically received 15 families a week, and "now our numbers have tripled, so we now see 45 families per week." People are "very grateful for whatever is put in those bags.”

And the contagious nature of the virus has brought changes in how pantries, large and small, operate.

"We’re not allowing anyone into the building. We’re doing a curbside service," said Anthony Achong, director of administration and operations for the Long Island Council of Churches, which operates a food pantry in Freeport. "They pull up in the parking lot, they knock on the door."

Nassau County Executive Laura Curran said the county's VetMart food pantry has been modified to provide drive-by food pickups for veterans in need and deliveries for those who can't leave home.

Joan Fuerch, a volunteer with Lutheran Church Social Services, which operates a food pantry in Uniondale, says "our operation is different than the way we normally do things," and that's because of the virus. "We’re trying to keep crowd size down … We try to go by appointment because, under the circumstances we’re dealing with, we need to keep crowd size down."