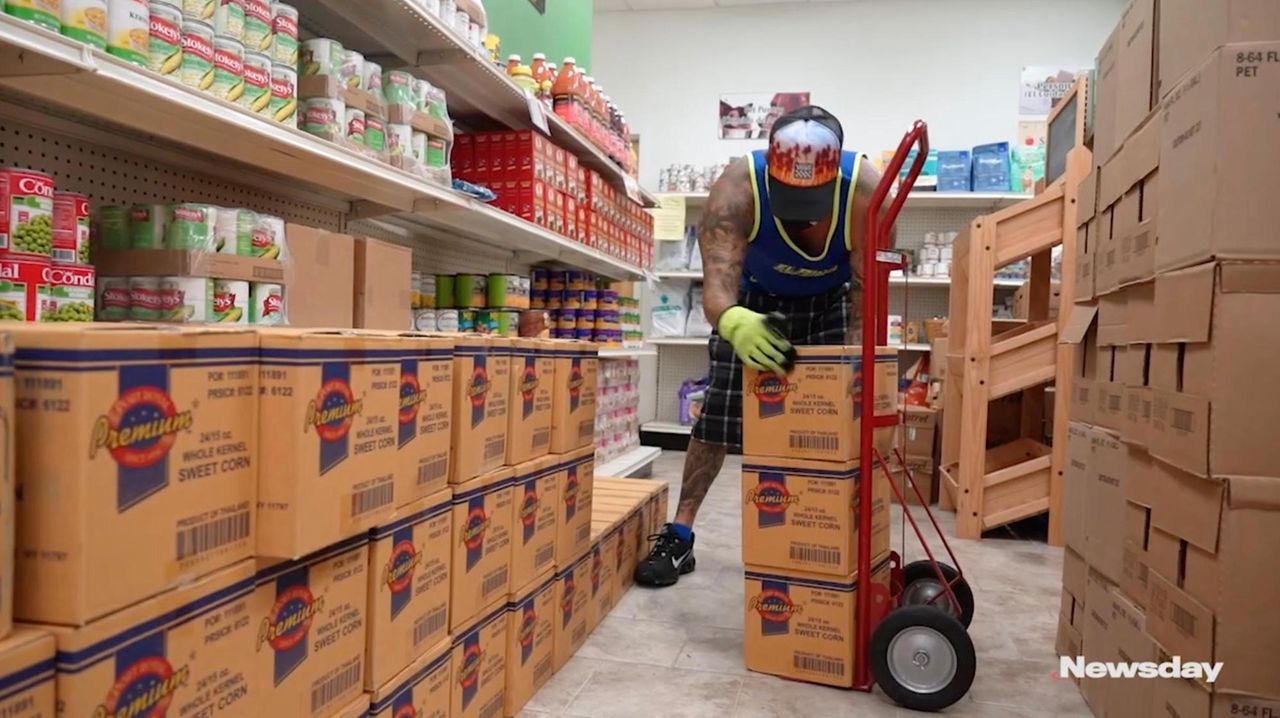 Even though thousands of Long Islanders have returned to work from the coronavirus pandemic, the need for food assistance remains great — as demonstrated by thousands of people flocking to food distribution sites in recent days, food bank executives said.

Food distribution nonprofit Long Island Cares said more than 70,000 additional people have been served since the COVID-19 outbreak started in March, and Island Harvest noted it has increased its purchases of food 528% over this same time period last year, helping more than 147,000 families.

"Our experience tells us sometimes it takes two years for people to get back on their feet," said Randi Shubin Dresner, president and chief executive of Island Harvest. "If they're out of work six months, the bills back up."

At a "grab-and-go" drive-through meal pickup site at Central Islip High School that Island Harvest helped organize Thursday morning, 1,000 meals — two days' worth of breakfast and lunch for families, plus a box of fresh produce — were gone in less than an hour. That served 500 families, Island Harvest said.

About 4,000 families were served during a Nassau County-sponsored drive-through food giveaway event Island Harvest did July 2 at Nassau Coliseum, Dresner said. She said the organization distributed 140,000 pounds of food.

"We’re finding people who have turned to the emergency food network for a long time and were on the brink of disaster before the coronavirus hit," along with others more recently seeking assistance who might have been doing well before but now are unemployed and struggling, Dresner said.

"If a car pulls up that is a Jaguar or Mercedes-Benz, they are as humble as anyone in a Ford, or Mazda or Chevrolet," Dresner said, adding that staffers are told to be nonjudgmental. "It’s very difficult for people to be asking for food, and so we want to be as sensitive as we can to everyone."

Of the 327 food pantries Long Island Cares assists, there has been a 30% increase in people served since the pandemic started in March, said Paule T. Pachter, chief executive of the organization.

"We are seeing about 70,000 to 75,000 new people who are turning to the food pantries for emergency food assistance," Pachter said. Long Island Cares has increased the food it sends to pantries by 46% since March 13, representing 2.2 million pounds more food than it provided last year at this time, Pachter said.

In addition to the pantries it serves, Long Island Cares provides food to people through 25 distribution sites of its own.

Pachter said about a third of people who seek food assistance "are indeed Long Island's poor, earning somewhere between $25,000 and $40,000 a year ... But then because of COVID-19 and the record number of job losses, furloughs, layoffs, that’s bringing the rest of the people."

Citing the Island's high cost of living, and people's extra expenses, Pachter said, "They just are having a rough time. We have seen so far in June, just in June, all the new people that we saw at our 25 locations [was] 15,457."

Since March 13 through the end of June, Pachter said his agency has served 64,430 people.

Both food bank officials praised the financial support they've received from local governments, corporations and foundations that they say have enabled them to meet the growing need. The organizations said they also have benefited from federal and state assistance.

Pachter said money from the federal CARES Act has been funneled through the counties and several local governments. For instance, Hempstead Town provided $2.4 million, though he couldn't provide a full accounting for all localities.

Dresher said Island Harvest received $2.1 million from Hempstead Town, plus $1 million from Nassau County through the CARES Act. And Dresner and Pachter said their food banks also received funding from the Nourish New York fund, which provided a total of $25 million to the state's food banks to buy produce and dairy from New York farmers. Pachter said his food bank received $790,000 from the fund, and Dresner said hers got $775,000.

Almida Coriano, a retiree from Central Islip, was at Thursday's food giveaway at Central Islip High School. As she was putting the box of produce into her car's hatchback, Coriano said she came because "food is very expensive in the supermarket."

Ismede Joseph, carting off a produce box, which included potatoes, carrots, cucumbers, zucchini and tomatoes, said the free food was important because "I am not working right now."

Allison Puglia, Island Harvest's vice president of programs and agency relations, who helped at Central Islip High, said she thought it would take two hours for the meals to be distributed, and was surprised it took less than half that time. Island Harvest has 31 school distribution sites that have served 65,000 families, according to officials. "We couldn't have these families go without," Puglia said.

At a Long Island Cares Center for Collaborative Assistance in Freeport on Thursday afternoon, a steady stream of people arrived at the plexiglas-encased window, through which they received food packages, which included canned goods and fresh produce.

Josary Rodriguez of Baldwin said she had been coming to the center since May "because I wasn't working and I needed it." Rodriguez, a mother of three, said she worked at a hair salon that was closed during the pandemic and had not yet reopened. The food, she said, "is a help. It's hard when you have to pay the bills."

Sheila Williams, 71, of Roosevelt came to the center with her daughter. "I never got a stimulus check and I'm on a fixed income," Williams said.

Pachter doesn't think the need will diminish any time soon.

"I think our biggest concern is that, although people are returning back to work, not enough are ... That’s going to create a long-term need for food pantries and food banks to respond," he said.