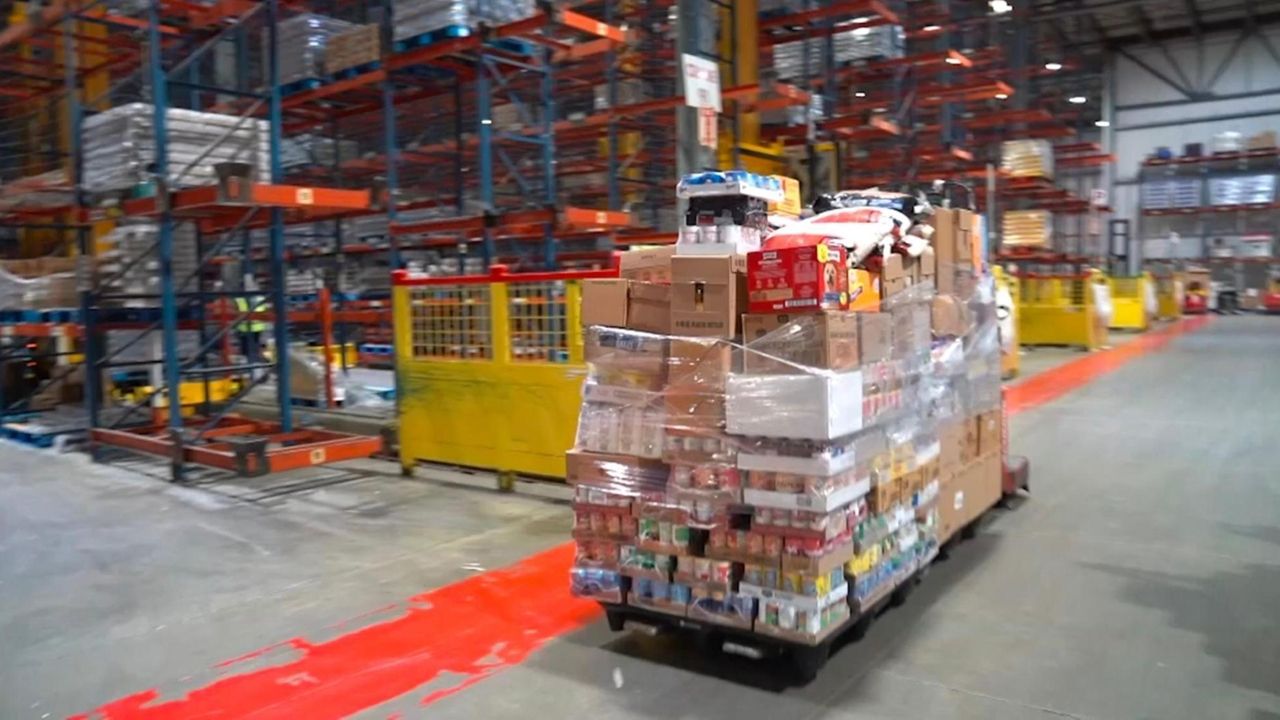 Jim Labrecque, vice president of distribution operations for Stop & Shop, says although some items may be temporarily out of stock, shelves are being replenished daily. Credit: Stop & Shop

As panicked shoppers have stripped grocery shelves of bread, milk, eggs and other household staples amid the coronavirus pandemic, questions have arisen about the safety and depth of the nation’s food supply.

But the issue isn’t widespread shortages of food, according to the U.S. Food and Drug Administration and food retail experts.

Retailers’ stock issues are a result of several factors, including insufficient store labor and shipping transportation to handle crushing demand, finite warehouse space, and hoarding consumers who are buying products more quickly than shelves can be replenished, said Rick Stein, vice president of fresh foods at the Food Marketing Institute in Arlington, Virginia.

“This is like a pre-snowstorm surge that’s now in its 25th day.  It’s nothing our industry has ever seen before,” he said.  The only true retail shortage of a product now is for hand sanitizer, because it is being diverted to health care facilities, he said.

At Stew Leonard’s, sales have been up 200% in the past few weeks but the panicked buying eased last week, Leonard said.

The chain has an advantage in that it has decades-long relationships with suppliers and, for the two Long Island stores, it buys half of its products from farms and family businesses that are within a day's drive of Long Island, Leonard said.

Also, each of its seven stores has its own warehouse on site.

Some supermarkets are reporting that sales are up 300%, in part because panicked consumers are showing no loyalty to particular brands, said Paul Weitzel, vice president of analytic solutions at Inmar Intelligence, a data analytics company in Winston-Salem, North Carolina.

But the nation’s dairy supply is not experiencing major interruptions, he said.

Consumer demand at Stop & Shop is causing intermittent out-of-stocks of some products, such as milk and eggs, but they are replenished daily, spokeswoman Stefanie Shuman said.

The Quincy, Massachusetts-based retailer has two warehouses that serve its 51 stores on Long Island – in Chester, New York, and Bethlehem, Pennsylvania, she said.

“All food products are transported by truck and … third-party distributors do take items directly to Stop & Shop warehouses,” Shuman said.

The biggest wholesale grocery distributor in the country is C&S Wholesale Grocers Inc., a Keene, New Hampshire-based company whose clients include Stop & Shop and Best Market.

Manufacturers are responding to the high demand for products in several ways, including focusing on increasing production of their most popular items, Mike Duffy, CEO of C&S, said Friday.

“Variety is going to be pared back. But that’s going to help us increase velocity from manufacturing,” he said.  For example, a noodle soup manufacturer might temporarily eliminate all but its two most popular flavors.

Also, manufacturers are limiting the amounts of products that wholesalers and stores can buy, based on what they’ve historically purchased, Duffy said.

C&S employs about 15,000 people across the nation and is hiring 1,000 more workers, expanding employee benefits and offering pay bonuses and more paid time off to attract and retain workers to handle the increase in work, he said.

Many stores don’t have the labor to stock shelves to keep up with demand, and restocking is usually done at night, Weitzel said.

So, some retailers are reducing store hours in order to give employees time to replenish shelves, he said.  And some retailers recently announced they plan to hire more workers.

Stop & Shop employs about 61,000 people at more than 400 East Coast stores.  The chain announced Wednesday that it will hire at least 5,000 workers for regular part-time jobs in stores, distribution centers and delivery operations across New York, New Jersey, Connecticut, Massachusetts and Rhode Island.

Stew Leonard’s, which has about 3,000 employees in its seven stores and headquarters, will hire about 300, Leonard said Tuesday.

With 1.5 million U.S. employees, Walmart said it will hire 150,000 workers at stores and distribution and fulfillment centers through the end of May.  The 3,750 that will be hired in New York State will include the key markets of the New York metro area, Eastern Long Island, and Buffalo, the Bentonville, Arkansas-based retailer said.

Over the next three months, Instacart will hire 300,000 more contract workers, including 27,000 in New York state, to pick up and deliver groceries, the San Francisco-based company said Monday.

The coronavirus is not affecting food safety, the FDA said.

“Currently there is no evidence of food or food packaging being associated with transmission of COVID-19. … Foodborne exposure to this virus is not known to be a route of transmission,” the agency said.