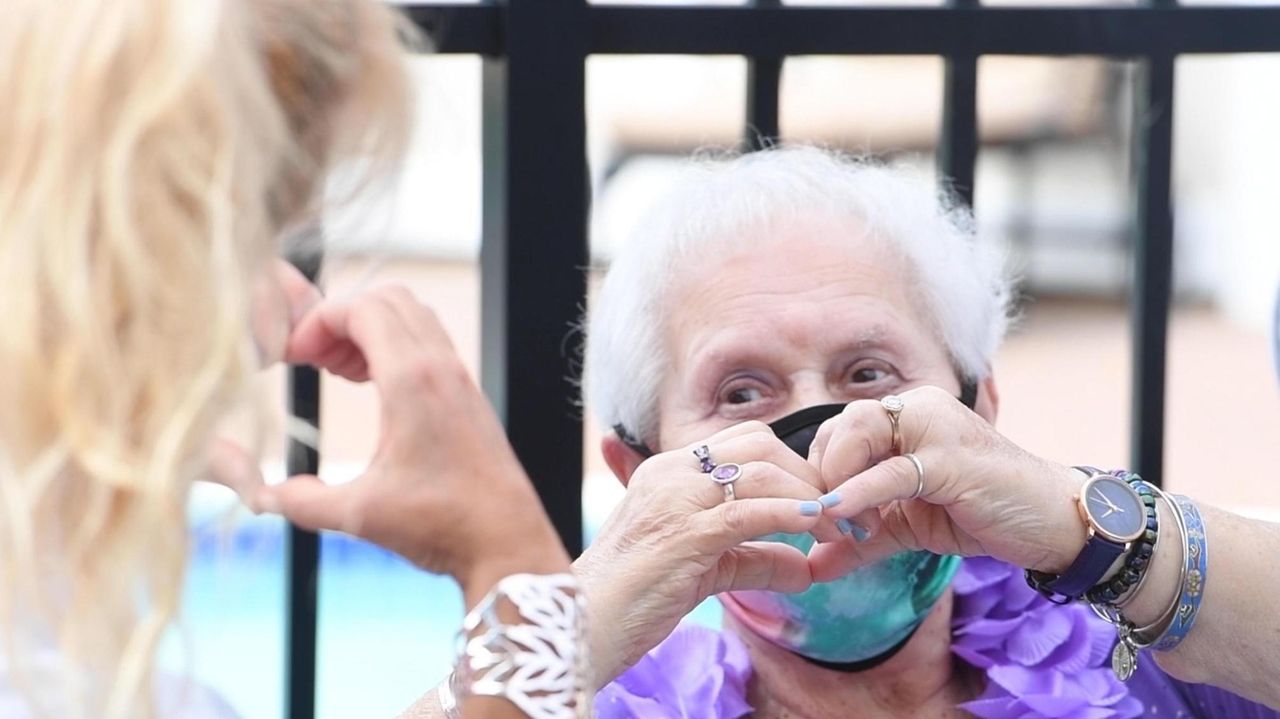 Gita Shorr, 90, was welcomed back to The Bristal in East Northport after a more than two-month battle with COVID-19. Credit: Newsday / Steve Pfost

Gita Shorr is a survivor.

The 90 year-old great-grandmother, whose arm is still branded with the numbers 33380, survived the horrors of the Auschwitz and Bergen-Belsen concentration camps.

Nearly 80 years later, Shorr survived a more than two-month battle with COVID-19, beating back a virus that has killed more than 20,000 senior citizens in New York alone.

On Thursday, Shorr — bubbling with excitement and even dancing with the help of a walker — was welcomed back to her home at The Bristal in East Northport by a parade of staff and family holding streamers and singing Carrie Underwood's hit song "The Champion."

"I was fighting for my life to come to this," Shorr said of the celebration in her honor. "But I am now happy."

Shorr was 12 when Nazi soldiers rounded up her family in Bialystock, Poland, on a terror-filled night in 1942 and took them to the Auschwitz concentration camp. Shorr's older sister, Mina, gave Gita her shoes, believing that if the child appeared taller and older, she could be among those assigned to a labor camp, where there was a better chance of survival.

Gita and two of her sisters were eventually rescued by British forces when the war ended in 1945 although her parents and four other siblings perished in the Nazi genocide.

Shorr said her time in the camps, fighting for survival with meager rations and death all around, would help in recovering from the virus decades later.

"I never forgot what I went through," Shorr said.

Gita Shorr spent most of her life in Oceanside, where she and her husband, Sol, who died in 1981, raised three children: David Shorr of West Babylon; Mira Rubin of Los Angeles and Rachel Gentile of Commack. Shorr remarried, but her second husband died years ago.

On May 1, Shorr, who has lived at The Bristal for the past four years, was diagnosed with COVID-19 and treated at Huntington Hospital.

Family members recalled that during the earliest stages of the illness, Shorr suffered nightmares and flashbacks from her time in the concentration camps.

The isolation took its toll. Gentile said her mother — always social, friendly and warm — would become unusually short-tempered and hostile. Family members worried that the matriarch would never recover.

"But my mom is a fighter with an excellent attitude," Gentile said. "Mommy always says, 'As long as your eyes are open, there's hope.'"

But when insurance wouldn't cover the cost of the nursing home, Gentile said she and her mother had a "slumber party" at a local hotel until she was ready to come back to The Bristal.

"Our mom is a very strong woman," Gentile said. "She's been through so much in a lifetime and she is my hero for sure."

David Shorr said despite his mother's struggles, "life has been good to her … She went through hell and here we are."

Gita Shorr remembers relatively little of the her time battling COVID-19. She lost her sense of taste and smell but said the worst part was being unable to see her family.

"I am very strong in my will," she said. "And that helped me. It let all the people know what kind of person I am."

Shorr is now fully recovered and anxious to spend time with her three children, seven grandchildren and eight great-grandchildren. Shorr has even suggested to her family that she's on the lookout for a new boyfriend.

"Life is too short so I want to take in everything," she said. "I am now very happy."

After months of fighting to survive, Shorr said her future is wide open.

"I went through this," she said "and I can go through anything."