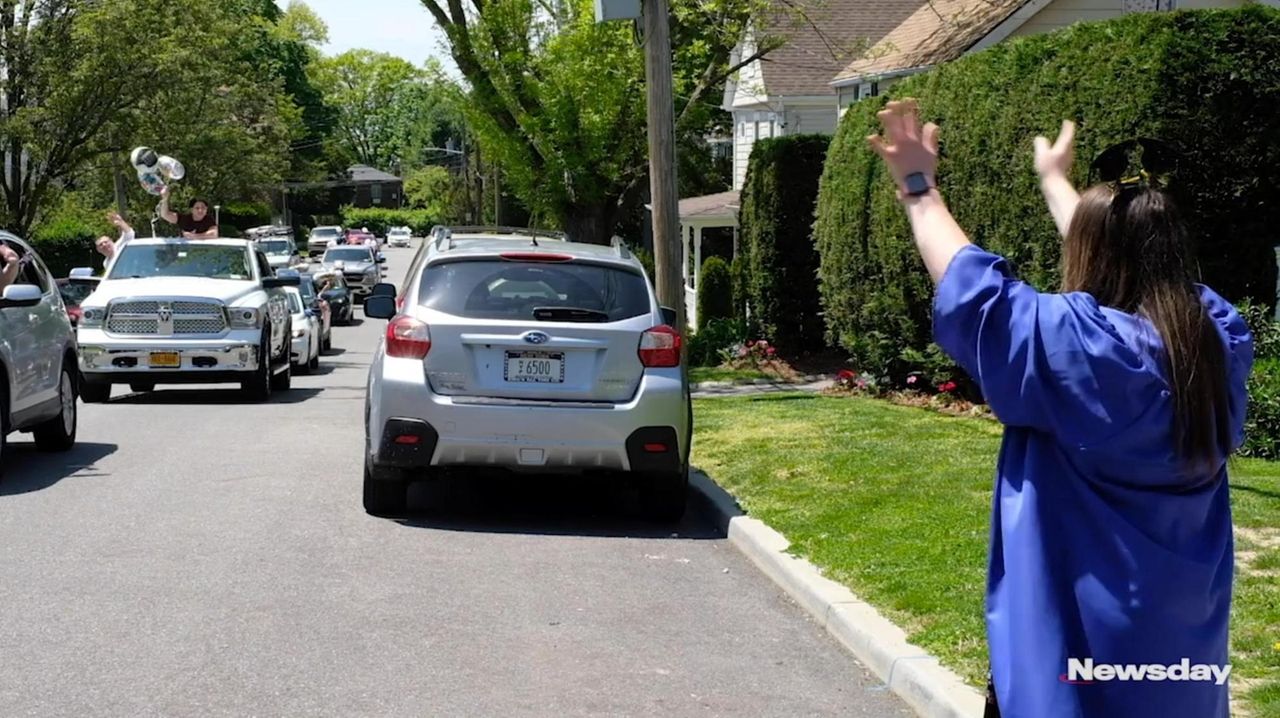 Jessica Reynolds, a one-time EMT from Glen Cove who just earned her master's degree in accounting from Hofstra, receives a suprise graduation parade from her friends and family.  Credit: Jeff Bachner

Like thousands of graduates on Long Island, Jessica Reynolds of Glen Cove can’t walk across a stage to accept a hard-earned degree as her family and friends cheer her on.

But the 23-year-old recipient of a Hofstra University master’s degree and former emergency medical technician did get the second part of that celebration Sunday — the day she was to graduate — as her friends, family, former co-workers and a parade of first responder vehicles rolled past her home.

“It was nice to see everyone, especially people from EMS who I used to volunteer with,” she said after the graduation parade in front of her Coles Street home to mark her completion of a master's degree in accounting. “It was a nice surprise to see everyone.”

She sported a blue graduation gown and waved to supporters like a guest of honor as Glen Cove fire trucks, police cars and an ambulance rolled past in front of a cavalcade of cars festooned with balloons and carrying her friends and family at about 1 p.m.

Reynolds said Hofstra’s graduation has been postponed until August.

She said she had seen other celebrations on the news with similar social distancing techniques for birthdays and other milestones as people try to maintain social interaction but avoid the spread of coronavirus. So, she sort of hinted at it to her sister, Amanda, who ran with the idea, her mother said.

“It went great,” said Denise Reynolds, Jessica’s mother. “She said to her older sister that it would be nice if we could do a graduation parade because she couldn’t walk for her master’s degree. So, my daughter put it together.”

Relatives came from as far away as Miller Place. The convoy included about 20 cars and the official vehicles and it wound down McLoughlin Street and up Coles Street where Reynolds stood on her front lawn in front of a sign congratulating her.

“We did it to show her we are proud of her and her accomplishments,” Denise Reynolds said. “It was a big surprise.”

Study: Blood thinners helping COVID-19 patients after they're released
Cuomo: Outdoor graduations of more than 500 people OK with restrictions
1:54
'Let's vaccinate them at the schools': NY's vaccine push focusing on students
1:56
De Blasio: After opt-in about 40% of NYC students to be in schools
State figures: NY nursing home staff lagging in COVID-19 vaccinations
2:27
Pandemic opened courts to virtual operations, but challenges persist
Didn’t find what you were looking for?