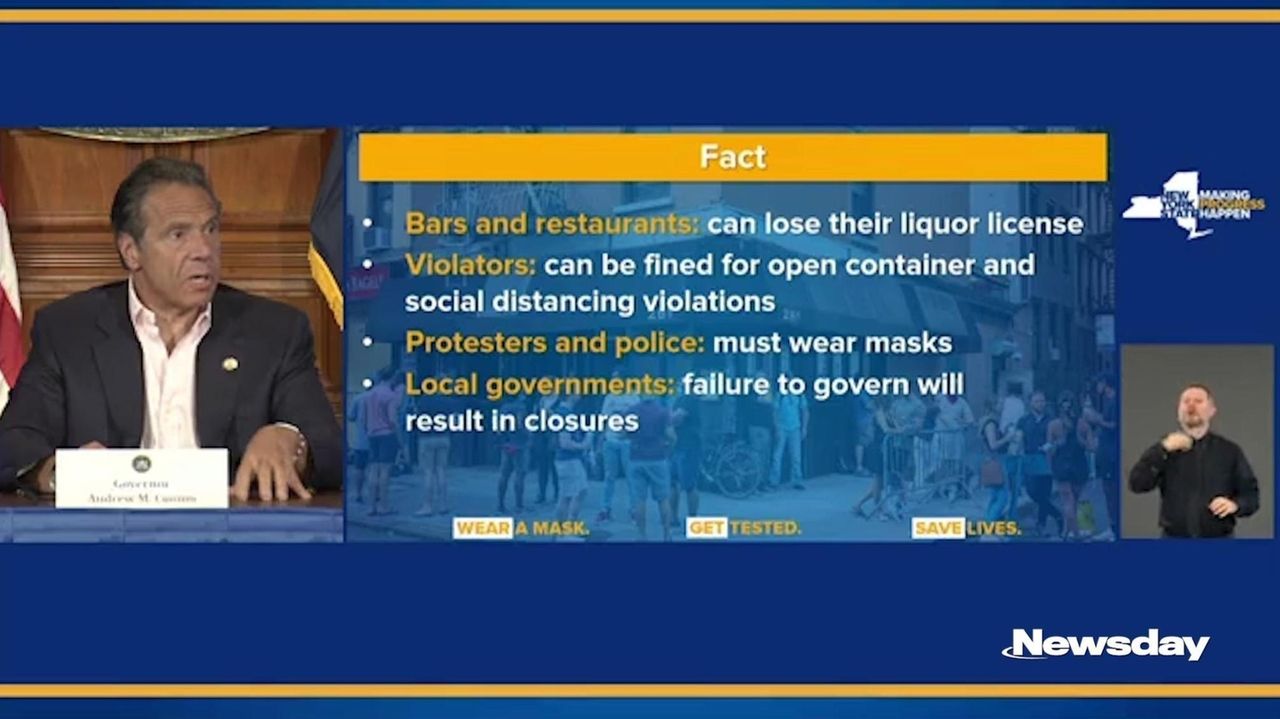 Gov. Cuomo said 25,000 complaints have been received about groups ignoring safety protocols at bars and restaurants in the Hamptons and Manhattan. He warned establishments could lose their liquor licenses and reopening efforts on Long Island and in New York City could be halted. Credit: Facebook / Governor Andrew Cuomo

An angry Gov. Andrew M. Cuomo, spurred by images of people crowding at bars and restaurants across the state this weekend apparently ignoring orders to wear masks and practice social distancing, vowed Sunday to crack down on businesses that flout laws designed to stop the spread of COVID-19.

Cuomo, saying the state has received 25,000 complaints about groups ignoring safety protocols, targeted bars and restaurants — saying the "leading areas" were Manhattan and the Hamptons. He warned establishments could lose their liquor licenses and reopening efforts on Long Island and in New York City could be halted.

Inspectors from the State Liquor Authority are out monitoring businesses, he said.

“We have never received more complaints in a shorter period of time,” Cuomo said Sunday during his daily COVID-19 update in Albany. “What’s alarming about the 25,000 is the volume but also shows how smart people are and how offended people are that they are calling and complaining.”

He did not provide a breakdown but said the "highest number" of complaints were from the Hamptons and Manhattan.

Cuomo said he was so troubled by images of packed bars and restaurants that he called some himself this weekend.

“We are not kidding around about this,” he said “You are talking about jeopardizing people’s lives.”

Suffolk County Executive Steve Bellone said Sunday he was not aware of any particular report of noncompliance in the Hamptons.

He also suggested people who were filing complaints might not be aware that outdoor dining is allowed under Phase 2 of the state's reopening plan. New York City is still in Phase 1.

Suffolk County Police Chief of Department Stuart Cameron said he has been in touch with local police chiefs on the East End of Long Island and has not heard about any large-scale issues with Hamptons businesses.

"I don't want to hear about this on TV," he told Newsday. "If you have a problem with my town, call me. If you know of any businesses in my jurisdiction that are causing problems, call me."

Schneiderman said he has not seen the problems Cuomo addressed and has mostly observed people social distancing and wearing masks. His jurisdiction includes Bridgehampton but not Southhampton Village and East Hampton.

He said the town is enforcing social distancing but he understands why business owners are frustrated because many of the rules are confusing.

Southampton Village Mayor Jesse Warren also said he sees a majority of people wearing masks and following social distancing guidelines but acknowledged there have been some situations where people congregated without masks.

It is nowhere as egregious as video from Manhattan showing people almost shoulder to shoulder outside bars and restaurants, he said.

"We are continuing to put the message out, that wearing a face covering is key to blunting the transmission of the virus," he said. "Nobody wants to see a second wave."

He said his administration, along with a group called Hampton's Health Society, distributed 30,000 masks in April and May. He said they can't order anybody on the street to wear a mask, but businesses in Southhampton are requiring people who enter to have face coverings.

"Customers do not want to come to businesses when they see people are not wearing masks and not being safe," he said.

A spokesperson for New York Mayor Bill de Blasio said the city is balancing safety with people's need to reopen their businesses.

"We had social distancing ambassadors out all weekend distributing masks and encouraging people to disperse after making their purchases," the City Hall spokesperson said in a statement. "These businesses are allowed to be open per the governor’s guidelines and we don’t believe imprisoning people or taking away their livelihood is the answer.”

Cuomo said the number of COVID-19 cases and hospitalizations in New York has continued to drop. As of Sunday, the governor said, 1,600 patients were hospitalized statewide — the “lowest level since we started this horrific journey.”

But he said New Yorkers should continue to wear masks and practice social distancing — pointing out that 22 states and Puerto Rico have seen their number of COVID-19 cases surge after reopening businesses and loosening shelter-in-place orders.

“Some states are rolling back reopening,” Cuomo said. “Imagine how devastating and dramatic an action like that is.”

Cuomo signed a bill on Sunday that requires the state Health Department to study the health impacts of COVID-19 on members of minority communities, which have been shown to have higher infection rates.

"There has been tremendous disparity as we know across the nation, not as bad in New York, but we don't want to have any disparity in New York, and we have some ZIP codes that have twice the infection rate in New York City," he said.

Open enrollment for health insurance plans under the New York State of Health marketplace has been extended for 30 days to July 15.

Meanwhile, state parks and beaches across Long Island, where capacity has been slashed to avoid virus spread, continued to fill up quickly Sunday as people rushed to get coveted spots.

Senate Minority Leader Chuck Schumer (D-N.Y.) on Sunday called on his Senate colleagues to reauthorize the Violence Against Women Act, pointing to a report that shows a 33% rise in domestic violence cases in New York State during the COVID-19 pandemic. The measure, which provides funding for housing, legal assistance and other services for victims of domestic violence, was passed by the House last year.

The act, which expired last year, was first passed in 1994 and then reauthorized in 2000, 2005 and 2013, according to Schumer's office. Over the last five years it has provided $4.6 million in funding for programs to help victims of domestic violence on Long Island.