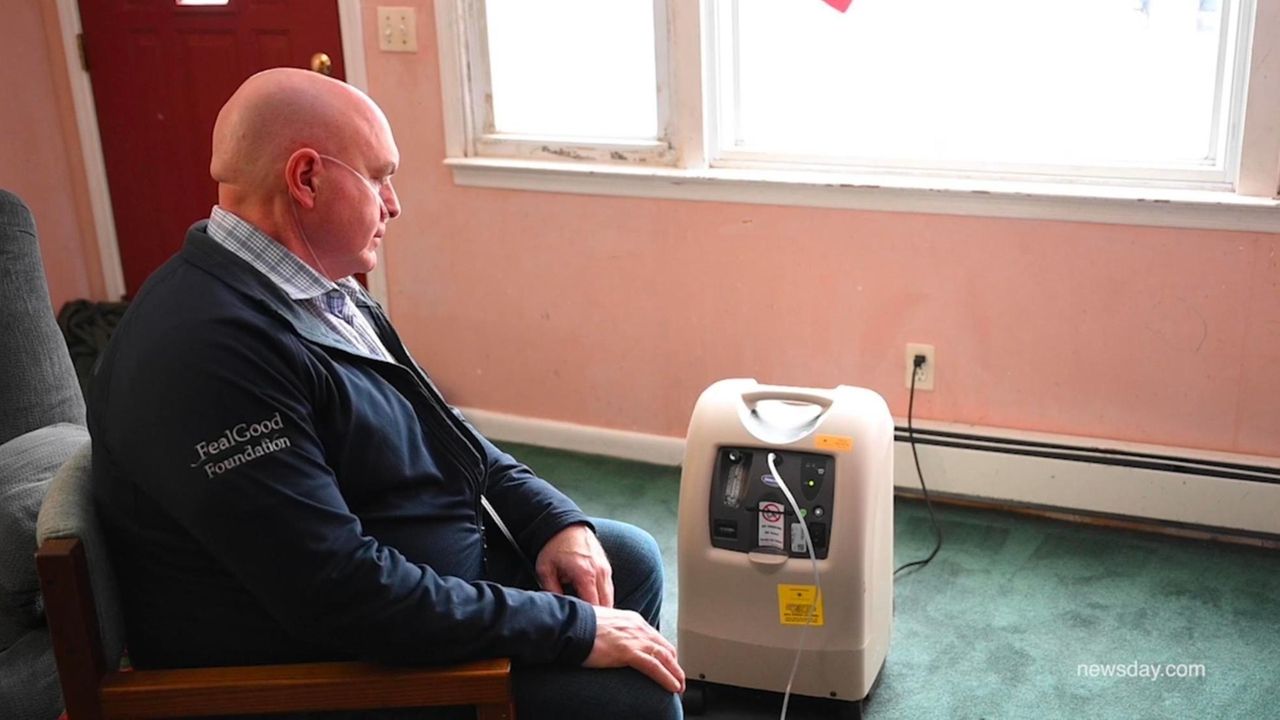 Retired NYPD officer Tom Wilson says he is relieved that he and other 9/11 responders with preexisting conditions may soon be able to get the COVID-19 vaccine.  Credit: James Carbone

NYPD officer Tom Wilson spent five weeks digging through the rubble at Ground Zero after the Sept. 11, 2001, attacks, searching for survivors and remains — all while inhaling toxic dust into his lungs.

Wilson, 52, of Bellport, would pay a stiff price for his efforts. He developed oral cancer and surgeons replaced part of his tongue with a slab of arm flesh during a procedure to remove cancerous cells. Wilson, who later joined the Suffolk Police Department, also underwent a radical neck dissection and the radiation that treated his cancer caused severe damage to his jaw.

For the past two months, Wilson and other 9/11 first responders suffering with cancer, chronic obstructive pulmonary disease and other respiratory diseases that have left their immune systems weakened and vulnerable to severe cases of COVID-19, were not qualified to receive the vaccine.

That ends Monday when the list of qualified vaccine recipients is expanded to those with serious health conditions, including 9/11-related cancers.

"It's important for me to get vaccinated because I want to live for my wife and five kids," said Wilson, who refuses to get inoculated until his mother and mother-in-law get their shots first. "I have been through so much but I just drive on."

John Ferreyra, 59, of Kings Park, who retired from the NYPD following a diagnosis of non-Hodgkins lymphoma connected to his work at Ground Zero, secured a vaccine appointment in Westchester on April 7. He wants others to follow suit.

"We may not necessarily be at the front of the line but we are on the line," Ferreyra said. "It is a good thing, especially with everything we have experienced individually and as a group."

For the close-knit community of 9/11 first responders, COVID-19 has been a cruel aftershock that targeted a vulnerable population at rates higher than others in their age bracket.

Michael Barasch, managing partner at the law firm Barasch & McGarry, which represents 15,000 members of the 9/11 community, said more than 100 clients have died from COVID-19 although he suspects the total number is likely more than 1,000.

Barasch wants the state to allow 9/11 responders to be vaccinated at World Trade Center health centers, including in Commack, Mineola and Brentwood — allowing them to avoid having to compete with millions of other New Yorkers for a scarce number of appointments.

"They need to do more than just change the rules here," Barasch said. "They have a moral obligation to take care of this population."

Former Suffolk Det. Phil Alvarez, whose brother, Lou Alvarez of Oceanside, is credited with helping secure health care benefits for thousands of fellow Ground Zero responders before his death in 2019 from colorectal cancer, said the state must simplify the process.

"If they are eligible for the vaccine, then make it easier for them to get an appointment," said Alvarez, who works for Hansen & Rosasco, a law firm specializing in 9/11 health claims. "And, what's easier than having 9/11 health clinics give the vaccine to 9/11 victims?"

Gov. Andrew M. Cuomo's spokesman, Will Burns, said the governor "made it a priority to ensure those with 9/11-related illnesses were included on the eligibility list as soon as possible, and we encourage these clinics to coordinate with their local health departments on vaccinations. As the Biden administration increases our supply, we will work with anyone who can help us get more shots in arms faster."

Advocates for 9/11 first responders have been unsparing in their criticism of Cuomo, as he expanded eligibility to dozens of "high-risk" professions and to New Yorkers 65 and older but failed to immediately include those with serious health conditions. The average age of 9/11 first responders is 57.

John Feal of Nesconset, a demolition supervisor at Ground Zero who spent 11 weeks in the hospital, and had part of his foot amputated after a 4-ton steel beam fell on his left foot, said 9/11 responders should have been added to the list weeks ago. Feal, who contracted COVID-19 in March, still has antibodies, and will not immediately seek a vaccination appointment.

"I am not happy that it took this long," said Feal, whose Feal Good Foundation pressured state officials to expand eligibility for Sept. 11 first responders. "Cuomo could have added them months ago and chose not to."

State officials said non-hospital workers were not eligible to receive the vaccine until Jan. 11.

FDNY Lt. Michael O'Connell, 45 of Westbury, developed sarcoidosis, an auto immune disease that inflamed his bones and joints, after spending time on the pile at Ground Zero. O'Connell, who contracted a mild case of COVID-19 last month, preventing him from securing a vaccine appointment until April, said it is critical that first responders sign-up when they get their chance next week.

"It's the best way to get back to a sense of normalcy," he said.