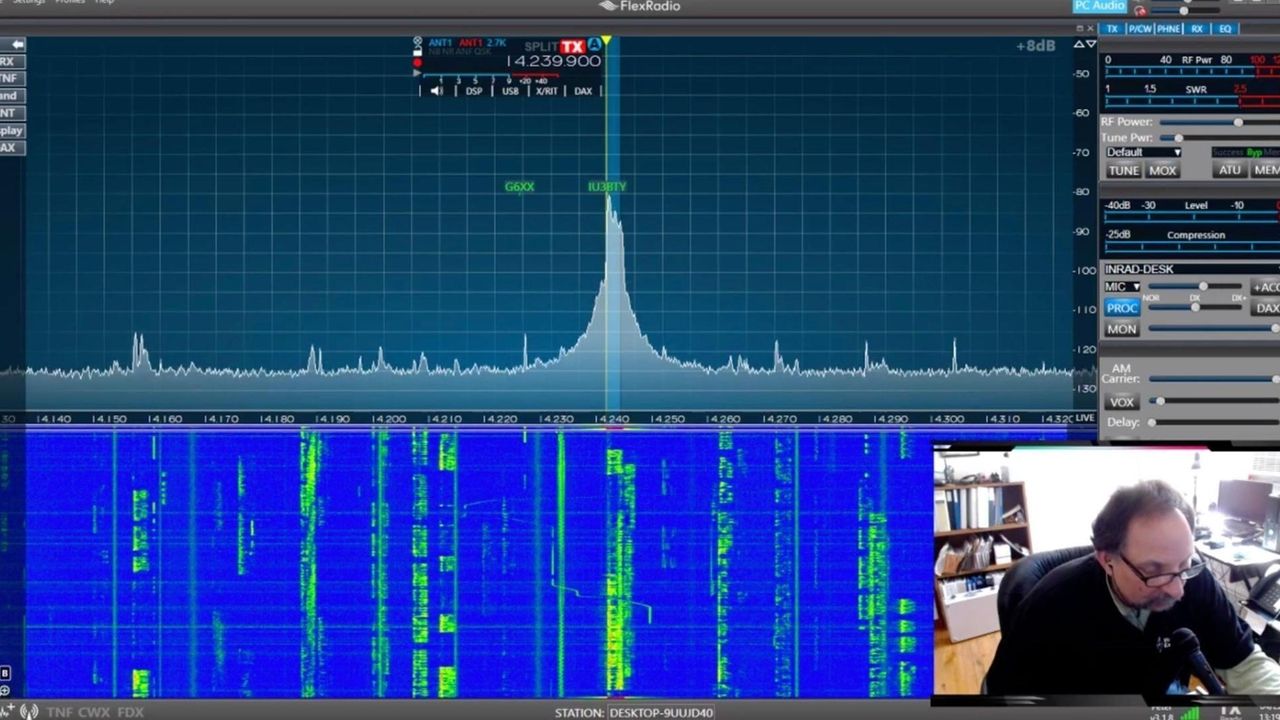 Local operators from the Great South Bay Amateur Radio Club (GSBARC) will take part in a monthlong event, from May 1-31, to honor the men and women on the front lines of the COVID-19 pandemic. Credit: Peter Portanova

Amateur radio operator from New York, Suffolk County, asking who's out there on the airwaves, even on another continent? We're planning a special event.

To honor the new generation of coronavirus pandemic heroes, local operators from the Great South Bay Amateur Radio Club (GSBARC) will look to one of the oldest forms of electronic social networking available to link folks in the time of social distancing: ham radio.

Their monthlong event, which will run 24 hours a day from May 1-31, will see FCC-licensed ham radio operators, hams for short, from each of the state's 62 counties operate their stations under the special event call sign K2H to reach out to other operators around the globe.

Operations will be on all bands and available modes, with GSBARC gathering logs from the specially designated K2H operators ["H" usually is called as "HOTEL," in this case it'll be denoted as "HEROES"] and offering certificates of appreciation for download.

Club member and event organizer Lou Maggio, 71, of Islip Terrace, said the idea was to remind hams and those they reach that "every contact is a thank you to a hero" who has put their life on the line in a time of crisis.

"We got this idea about three weeks ago," Maggio, NO2C, said on Tuesday. "We were sitting around and we see all these stories of people driving by places, honking their horns to show thanks, and we said, 'How can ham operators, who have this ability to communicate all over the county, all over the state, all over the world, do something to honor these heroes too?' We came up with this."

Ham radio created what, in reality, was the first "internet" slang. Except that the "internet" is the airwaves and the slang often dates back to the turn of the 20th century.

CQ means seeking contacts. "Work" means to make that contact and talk. DX means they're talking to contacts — working them — from very far away, maybe from another continent.

Hams do all this by bouncing radio waves off the atmosphere, the ionosphere, though in some cases they also use a network of ham-specific satellites orbiting the Earth. Many, operator Frank Garofalo, 64, of Massapequa Park said, are as small as a pound or two.

Garofalo, WA2NDV, on Tuesday hooked into a satellite about 330 miles above the Earth whose transmission window lasted just 11 minutes but reached from the Great Lakes to somewhere in the Atlantic, from South America to Nova Scotia.

"Ham radio was social networking before we knew what that even was," Garofalo said.

In fact, Maggio said, when other forms of communication go down in times of catastrophe, often it's only amateur or ham radio communication that works.

That's why hams are enlisted by agencies like the Red Cross when disaster strikes.

It also enables folks quarantined around the world by the current pandemic to reach out and talk to each other.

Peter M. Portanova, 52, of Northport — whose streams can be found on YouTube, Twitch and Facebook — said that in recent weeks he had worked contacts in Russia, Ukraine and Afghanistan, among other places.

Portanova, W2JV, said: "I was speaking recently to an individual in Finland and he spoke about one of his family members coming down with the symptoms for COVID and said he was able to get the help he needed through a local amateur radio repeater [someone who forwards messages], and so he was able to help save his affected family member. It's things like that."

It's estimated that there are thousands of hams on Long Island, many belonging to clubs, among the 750,000 amateur operators in the United States and 3 million worldwide.

"When they hear our call 2," Portanova said, noting the 2 stands for the zone, in this case the New York-New Jersey metro region, "well … people know New York is the epicenter of this pandemic. You can just tell that people you work know that."

Those participating in the event are being asked to log all their contacts in May to a special site, and then they will be able to download certificates to commemorate their participation. Certificates are a part of the ham culture too, sort of like stamps in a passport.

Maggio noted that one of the certificates already had been posted by grateful medical staff on a bulletin board at NYU Winthrop Hospital in Mineola.