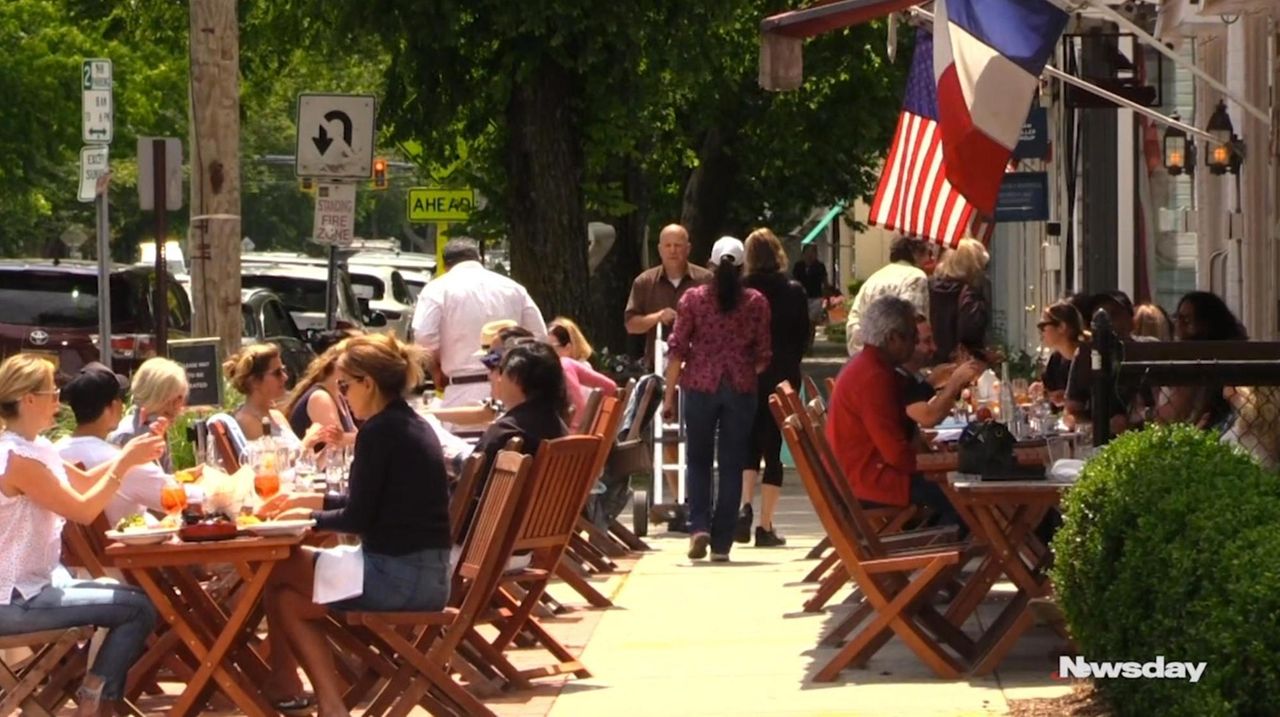 A day after Gov. Cuomo expressed outrage over an alleged breach of social distancing protocols at businesses in the Hamptons and New York City, Newsday went to Southampton Village to check out the scene. Many wore masks, but some didn’t. Here’s the latest from Cecilia Dowd in our daily coronavirus wrap-up video. Credit: Howard Schnapp and James Carbone

Bellone's directive came after Cuomo said the state received 25,000 complaints about groups congregating without masks and social distancing, with the highest number of complaints originating from the Hamptons and Manhattan.

The county executive said the lack of strict compliance at outdoor restaurants, which reopened last week as Long Island entered Phase 2 of its economic recovery from the COVID-19 pandemic, was not surprising following a three-month period where residents have been locked indoors and as the county continues to see a decline in infections and deaths.

"There is always a concern, as we go week by week and see the numbers decline; and its summer time and people have been cooped up for a long time, that the message seeping in is that everything is OK. And clearly it’s not," Bellone said.

"We have consistently said it’s important to reopen our economy," he added. "But we need to do it in a safe way. And the biggest key to that is the public continuing to abide by the guidance and use common sense."

Bellone said restaurants will be receiving "reminders" of state regulations from the county's Health Department while county law enforcement officials have been reaching out to their counterparts on the East End to coordinate efforts.

Bellone characterized the recent lack of compliance as a "hiccup," arguing most residents have continued to follow the guidance.

But Newsday videographers have found ample evidence of large gatherings in busy commercial districts in Huntington, Port Jefferson and Southampton, with crowds walking the streets or gathering in groups without facial coverings.

Cuomo said people frequently send him texts, videos and photos of large gatherings failing to follow the rules, established in an April executive order requiring New Yorkers to wear a mask or a face covering when out in public and in situations where social distancing of more than six feet from another individual cannot be maintained.

"So I made a few phone calls and said to restaurant owners, bar owners, ‘What are you doing? We have the guidelines. I’m looking at a picture of your establishment taken 25 minutes ago,’” Cuomo said Monday.

The governor, who also called out local government leaders, made it clear he has a powerful weapon to back up his orders and any public shaming.

“You can lose your liquor license,” Cuomo said. “This was a very serious sanction … You are responsible.”

East End residents and elected officials Monday scratched their heads after Cuomo singled out the Hamptons.

Southampton Town Supervisor Jay Schneiderman said he was “shocked” by the governor’s claim.

“We talk every day practically to his local representatives," Schneiderman said. "They’ve never shared any problem with widespread noncompliance or even a single establishment that’s not complying with the law."

East Hampton Supervisor Peter Van Scoyoc echoed those concerns. He noted that there were just two "unfounded" complaints over the weekend, including a household gathering on the green in Amagansett, and at an outdoor yoga class.

“We have not experienced any significant issues regarding social distancing or other violations of the governor’s orders in East Hampton,” Van Scoyoc said. “Residents and visitors are acting responsibly and being respectful.”

Warren said he encountered only a handful of residents who were willfully noncompliant and that the tony village was largely obliging the rules.

“I don’t think our region is any different than any other part of the state,” Warren said. “The East End of Long Island has done well.”

One exception was Alexander Nielsen, 19, of Wainscott, who was walking a bicycle along Main Street. He called the notion of donning a mask “a bit annoying,” but added “I don’t think it’s that much of a problem to wear.”

Det. Sgt. Herman Lamison of the Southampton Village Police said no violations have been written for lack of compliance with social distancing or mask-wearing orders.

The department has received some calls, he said, but by the time officers arrive, they find the caller was either in error, or the violator didn’t fully understand the order and complies.

Bellone said Suffolk County has avoided taking that tact, preferring to focus on education and advising residents and businesses of the guidelines.

"To successfully navigate this, we do need people to voluntarily comply," Bellone said. "It would be impossible to just get complete compliance across the board by compelling people to do things they don’t want to do. People need to understand the importance of it and want to do it because they know it will help keep our economy open and keep them and their families safe."

With Candice Ferrette and Michael Gormley

Cuomo: NY went from 'worst' to 'best' in coronavirus fightNew Yorkers have accomplished the low level of hospitalizations and deaths due to COVID-19 because "we did it together" in observing social distancing and following other guidelines