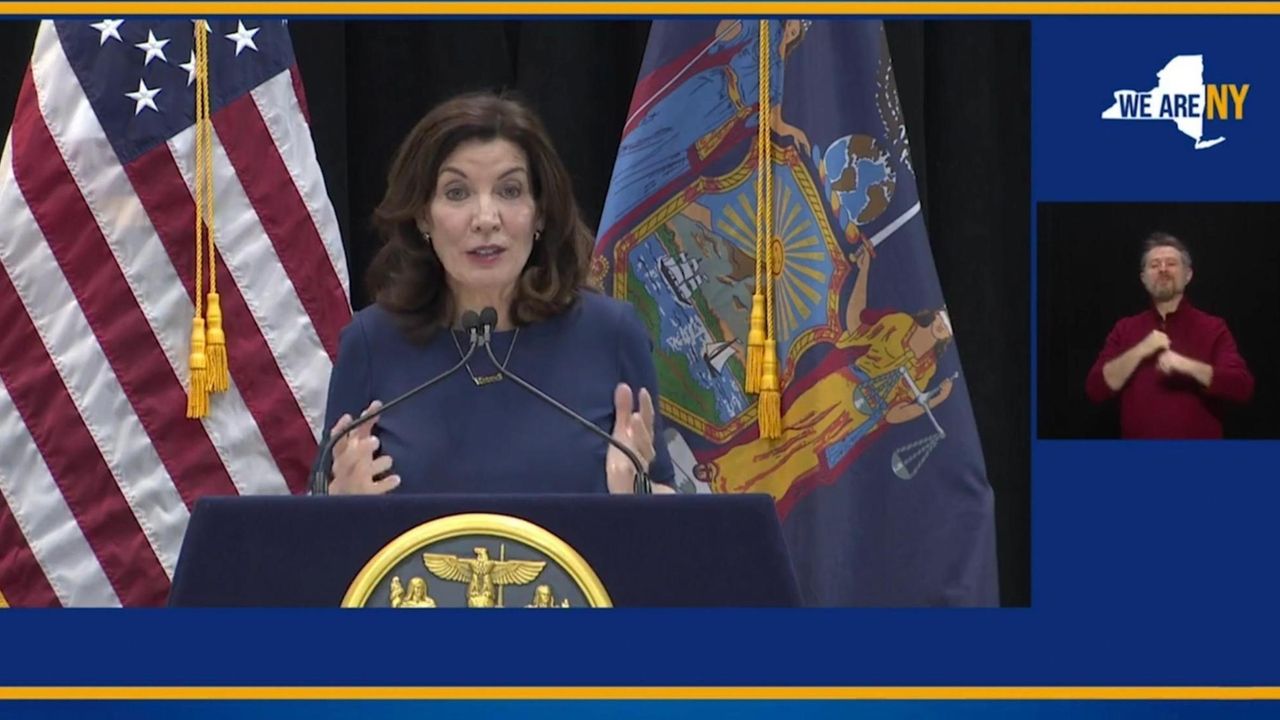 Gov. Kathy Hochul's mask mandate starts Monday and lasts through Jan. 15, at which time it may be extended. It applies to everyone 2 years old and older. Credit: NY Governor's Office

Restaurants, stores and all other public indoor places in New York State must require customers and staff to wear masks, or they must require proof of vaccination for entry, Gov. Kathy Hochul ordered Friday, as COVID-19 numbers continue to surge.

The measure takes effect Monday and lasts through Jan. 15, when it could be extended. It applies to everyone 2 years old and older.

Violating the order may result in civil and criminal penalties, and a $1,000 fine for each violation, the state said. Local health departments are to enforce the mandate.

Hochul said an increase in COVID-19 cases, reduced hospital capacity and low vaccination rates in some areas prompted the mandate. The statewide seven-day average case rate has increased 43% since Thanksgiving, she said, while hospitalizations have increased 29%.

"We shouldn't have reached the point where we are confronted with a winter surge, especially with the vaccine at our disposal, and I share many New Yorkers' frustration that we are not past this pandemic yet," Hochul said.

New York City already has a vaccination requirement for entry into most indoor public places.

"The rest of the state now has a wake-up call," Hochul said.

Dr. David Battinelli, a senior vice president at Northwell Health, called Hochul’s move "an excellent first step. This gets you really close to where you want to be."

Battinelli said it would be ideal to require both proof of vaccination and a mask, although that may not be feasible immediately, with so many people unvaccinated and the policy going into effect Monday.

"You can still transmit it even if you’re vaccinated because it’s not 100% protection," he said. "And to get close to 100% protection, you’re talking about a booster as well, and nobody’s going to mandate a booster yet."

"We’ve been talking about masks now for a long time, and we know that masks are effective at reducing the risk of transmission of the virus, and certainly at a time when cases are going up in New York State and positivity rates are going up as well, it’s prudent," he said.

Enforcement could be an issue, Polsky said, since he has heard about uneven enforcement in New York City, where people must show proof of vaccination to enter restaurants, bars, sports and entertainment venues, gyms, movie theaters, museums and other public locations.

Nassau Health Department spokeswoman Mary Ellen Laurain said the county will enforce the order. "We are awaiting written guidance from the state," she said.

Suffolk spokesman Derek Poppe didn't respond to questions as to whether the county would enforce the requirement, but said, "We will review the state’s new guidance once we receive it."

"COVID continues to be a threat to our economy, and many businesses have already implemented the governor’s new public health measures," said Matthew Cohen, CEO of the LIA. "The good news is our economy will stay open with no closures or shutdowns while we get rising infection rates under control."

"We have said for months that the only way to achieve a full economic recovery is to get the virus under control," the group said. "We hope every New Yorker will comply with the new order and treat retail employees with the respect that they deserve."

Emmanuel "Manny" Voumvourakis, co-owner of barbecue restaurant Smōk-hau̇s in Garden City, said he’s glad the state is taking the steps — and giving business owners the option to stick to masks.

"We are getting plenty of spillover customers coming from Queens to sidestep requirements," he said. "That’s kind of helped us maintain steady business over the last quarter."

The businesses and other venues must implement either a mask or a vaccination policy — they can't "mix and match," allowing some people in with proof of vaccination and others with a mask, the state said.

The mandate also applies to offices.

The move comes as the new omicron variant has started to emerge in the state. Officials have confirmed 19 cases through testing, including three in Suffolk, but believe many more are present.

The Black Sheep Ale House in Mineola will reinstitute a vaccination requirement it had started and stopped, owner Vincent Minutella said.

"It’s a much more enjoyable environment in the bar when people are free to go about their business without masks on," he said.

Eric Lemonides, co-owner of Almond in Bridgehampton, said the French bistro has been requiring proof of vaccination since late summer, and has rarely encountered resistance.

Diners appreciate "not only being in a room where everyone was vaccinated, but also being with people who were on the same side emotionally — trying to keep everyone safe from COVID," he said.

Almond’s vaccine requirement is still an anomaly among local restaurants, which Lemonides finds disheartening. "I don’t think enough restaurants have embraced it, which I think is a bummer," Lemonides said.

Mike Durant, president and chief executive officer of the Food Industry Alliance of New York State Inc., an Albany-based group that represents the retail food industry, said the group is concerned about store employees being forced to confront combative customers who refuse to obey the mandate.

"I think that the industry needs help from the state in addressing that" with law enforcement and other resources," he said.

Businesses unfairly bear the burden of being penalized for noncompliant customers, Durant said.

"Why are only the businesses fined? Why don’t the fines work both ways?" he asked.

The vaccination requirement has shown results in New York City, which has the lowest positivity average in the state, at about 2.5%. Some areas upstate are as high as 10%.

On some days, Long Island is producing nearly as many new cases of COVID-19 as New York City, even though the city has triple the population.

Long Island's seven-day average for positivity increased slightly to 6.20%, while the level dropped slightly in New York City to 2.52%.

Across the state, 55 people died Thursday of causes linked to the virus, including three in Suffolk and one in Nassau.

All indoor public places, including restaurants, stores and gyms, must require customers and staff to wear masks unless the businesses or venues require vaccination for entry, Gov. Kathy Hochul ordered Friday.

The mandate goes into effect on Monday, and will be reviewed in mid-January.

The order is aimed at stemming a rapid rise in COVID-19 cases in much of the state.

Hochul: 'Alarm going off' on COVID-19; additional steps comingThe governor said the omicron variant is increasing through "community spread." Meanwhile, the FDA and CDC approved booster shots for 16- and 17-year-olds. Where to get a COVID-19 booster shot on LIFor Long Islanders who have been fully vaccinated and are looking for a booster dose, these resources may help. LI's COVID-19 positivity rate at 6.04%, highest in nearly a yearThe rate prompted one medical expert to say it's time for Nassau and Suffolk counties to change their tactics in dealing with the virus, noting that New York City is doing far better.  COVID-19 vaccination rates by ZIP code on LI