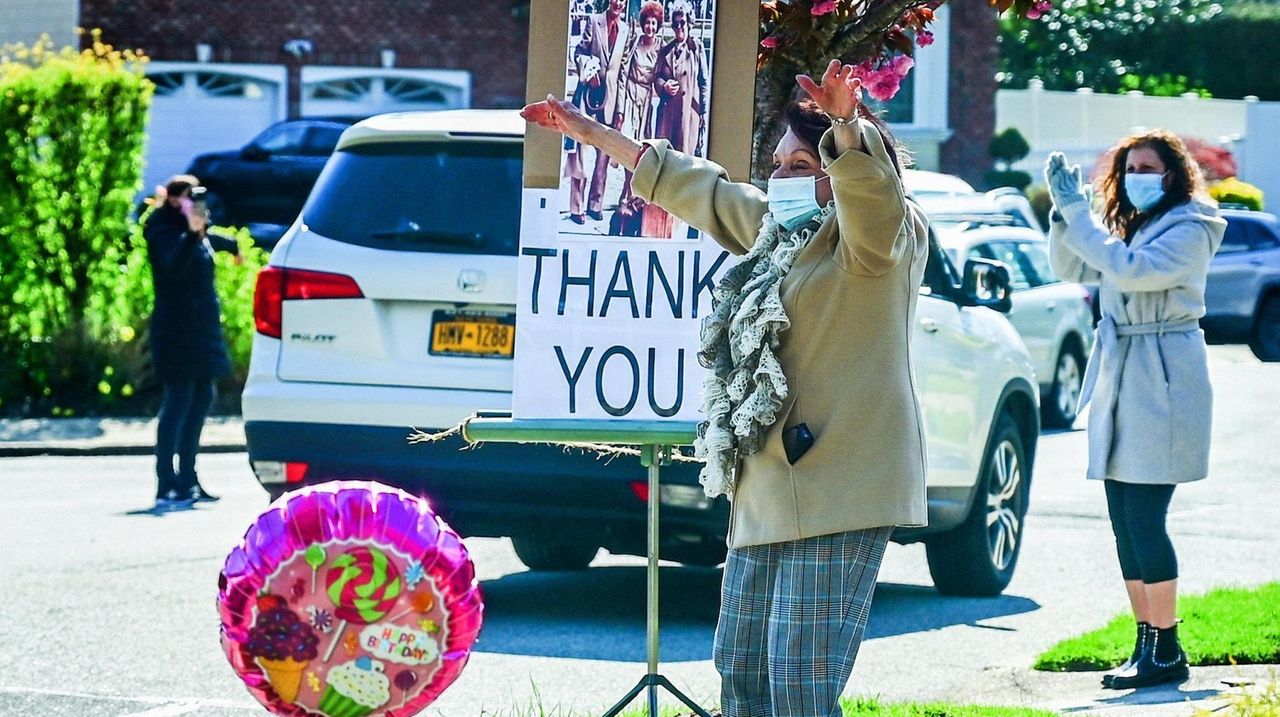 Over the last few weeks of quarantine, students have also been sending cards and delivering groceries to other survivors who live on Long Island. Credit: Newsday / Chris Ware

Rachel Epstein jumped for joy and waved her hands as a caravan of about 30 cars slowly moved down her street in Roslyn on Wednesday. It was unlike any Holocaust Remembrance Day event she’s ever been a part of.

“I’m beside myself,” said Epstein, a Holocaust survivor. “I’m going to remember this till the day I die.”

Students from the Witness Project, a yearlong program funded by the Jewish philanthropic organization UJA Federation, organized the drive-by to commemorate the annual day that honors the 6 million Jews who were murdered in the Holocaust.

Although the annual day was actually Tuesday, the strong winds and rain caused the drive-by to be postponed to Wednesday.

Epstein is among the survivors who have participated in the program since it began three years ago. She and other survivors share their Holocaust memories with high school students, who stage a theater production of the stories in April.

"I think the main takeaway from each of their stories, is that while everything that happened to them was so horrible, they've each found a way to stay positive," said Sarah Rubin, 18, of Port Washington.

Rubin now goes to Cornell University but participated in the program when she was a junior in high school. The bonds she formed with the survivors and the lessons they imparted "changed my life," she said.

"They look on the brighter side of things and that’s definitely something I’ve tried to apply to my life," Rubin said.

This year’s production was canceled due to the coronavirus pandemic. Instead, the students marked Holocaust Remembrance Day by driving past Epstein’s home with signs, cards and flowers. They also wished Epstein an early happy birthday — her birthday is April 29.

Over the last few weeks of quarantine, students have also been sending cards and delivering groceries to other survivors who live on Long Island.

Epstein was 10 years old when her parents were taken away from her and her 5-year-old brother, Leon.

It was 1942 and anti-Semitism had crept into every part of her hometown of Nazi-occupied Compiègne, France.

As her parents were taken away, her Catholic neighbors promised to take care of their two children until they returned, Epstein said. But her mother and father never came back.

“In retrospect, the enormity of that task is mind-boggling," Epstein said. "Those well-meaning neighbors made an on-the-spot vow to not only care for us but to protect us from harm.”

Epstein vividly recalls living with the threat of death after her parents were taken.

The memories haven’t faded nearly 80 years later for the Holocaust survivor, and many like her, she said.

“You can’t dwell on it, yet you go to sleep with it and you wake up with it,” Epstein said. “You relive it. It never goes away.”

Despite the pain, Epstein tells her story regularly to the young adults and teens who take part in the Witness Project. Her hope is that the students share her story with their children, passing down the memory of what happened to future generations, she said.

For Rubin, Epstein's zest for life despite all she's been through has been inspirational.

"I hope to be that happy and that full of joy when I’m her age," Rubin said. "She’s living her life and doing all that she loves."

Epstein said living under quarantine because of the coronavirus is far different from living under Nazi rules as a child, though she is reminded of that time. She said she wanted people to take it one day at a time.

"This is life," Epstein said. "When I was hidden in the basement during the war, we didn’t know if were going to be shot the next day, but you still have to hope. And you have to hope for the best."