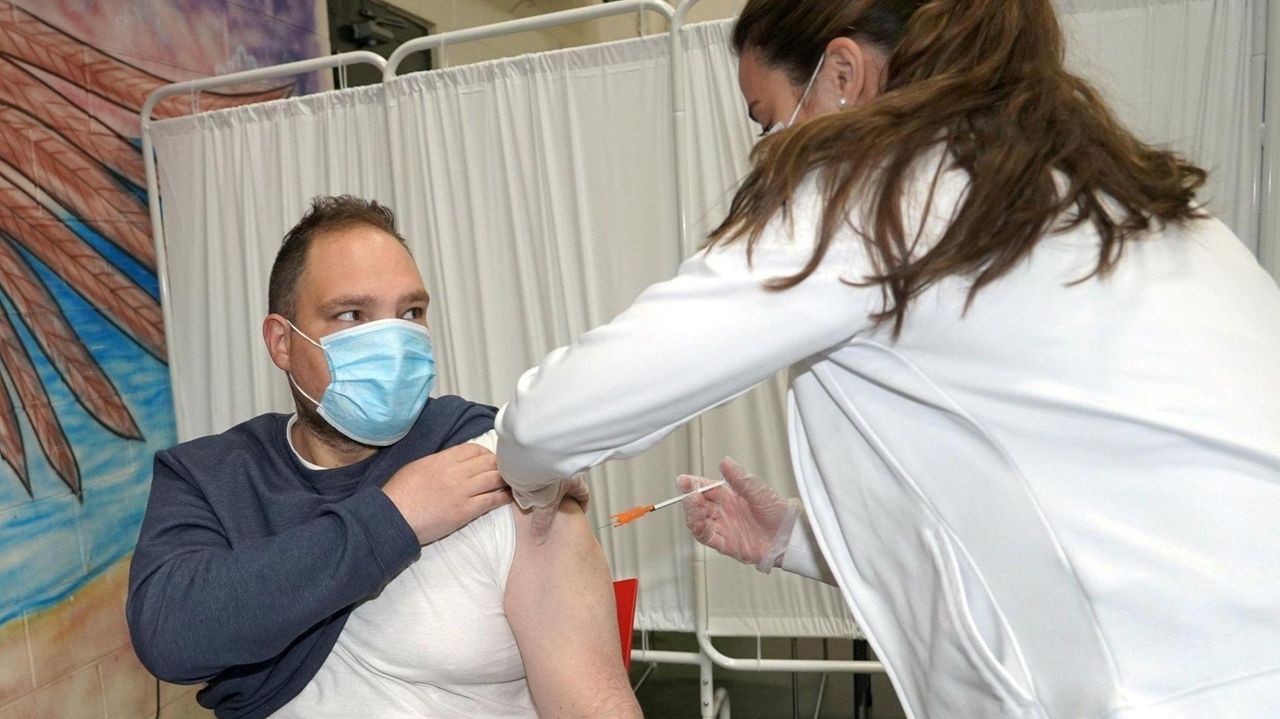 A special pod to vaccinate members of Long Island's homeless population was held in Amityville on Friday. The pod was a joint effort of the Long Island Coalition for the Homeless and Northwell Health. Credit: Debbie Egan-Chin

Some of Long Island's most vulnerable residents received their first dose of the COVID-19 vaccine Friday during a first-of-its-kind vaccination pod in Amityville for the region's homeless population.

More than 75 doses of the Pfizer vaccine were distributed at the Long island Coalition for the Homeless to Nassau and Suffolk residents living in shelters and on the streets. The event was organized by Northwell Health.

"The homeless … is a very high-risk population because they don't have access to masks and social distancing protocols and all the other things the community can avail itself of," said Dr. Debbie Salas-Lopez, senior vice president of community and population health at Northwell. "They are very vulnerable and very high-risk."

John Asaro, 36, who ended up in a Patchogue shelter after facing financial issues more than a decade ago, said while some members of the homeless population are hesitant about taking the vaccine, it's needed to return to normalcy.

"It's very important for society as a whole, and for yourself and your family to stay protected and safe during this time," Asaro said after receiving his first dose of the vaccine.

Pre-COVID, there were roughly 3,800 homeless individuals in Nassau and Suffolk, primarily families with young children living in temporary shelters, said Greta Guarton, executive director of the Long Island Coalition for the Homeless.

But with the widespread economic fallout from the pandemic — and the virus spreading in congregant settings like shelters — the number of Long Islanders living on the street has increased, Guarton said. While there are no firm numbers, she said many Coalition clients have contracted the virus and succumbed to COVID.

"It should be a number one priority to get folks who are homeless, and others who are in congregant settings, vaccinated because of the comorbidities; because of their general lack of access to health care and because of the community settings that they're living in," Guarton said. "They are living with a lot of other people in close quarters."

The Coalition has arranged for those who got their shots to return in three weeks for their second dose.

Samuel Carmen, 60, said he wanted to set an example for other members of the homeless population to get vaccinated. Carmen, who served 22 years in prison and suffers from alcoholism, said he typically sleeps under a bridge in Ronkonkoma.

"It's important for everyone to get this shot and keep the spread down," Carmen said. "Don't ever be afraid to step up. This virus is not playing around with people. It can kill you without a doubt. It's important to come down and get your shot."

Northwell and the Coalition are planning similar vaccination pods next week in Port Jefferson and Hempstead.