This story was reported by Jim Baumbach, Paul LaRocco, David Schwartz and Sandra Peddie. It was written by Schwartz and LaRocco.

The numbers, provided by the region's hospitals at Newsday's request, show a partial view of the toll that the coronavirus pandemic has taken as local cases have surged. Though many have since returned to work, the larger facilities, such as Stony Brook University Hospital and those run by Northwell Health in Nassau County, have seen roughly 200 employees each test positive for the virus in recent weeks.

Thirteen of the area's hospitals provided COVID-positive employee counts that total 1,175. Eight others, including the major NYU-Winthrop and Good Samaritan medical centers, didn't provide Newsday with data, meaning a conservative projection would put the count well over 1,200.

Orders to reuse masks and gowns once considered disposable have compounded the inherent dangers that workers face, leading to additional infections, according to the nurses and unions. Staff members who tested positive are being sent back to work before being retested, as long as they haven’t had a fever for 72 hours, some hospital officials said.

“We’re still afraid,” said Yasmine Beausejour, a registered nurse at Northwell's Long Island Jewish Valley Stream, speaking on behalf of the New York State Nurses Association, where she is the southeastern regional director on its board of directors. “We’re afraid for us, our families. Are we exposing them?"

The numbers of hospital staff with the virus ranges from 220 at Stony Brook, to fewer than 100 at Huntington Hospital and Southside Hospital in Bay Shore to 27 at Peconic Bay Hospital in Riverhead.

“The fear that everyone is experiencing is real," he said. "This is an unknown virus.”

Two Long Island hospital nurses are known to have died after contracting the coronavirus, along with at least five other medical support staff.

Ali Dennis Guillermo, 44, of East Patchogue, died Tuesday after a three-week battle with the virus. Guillermo, an intensive care unit nurse at Long Island Community Hospital in East Patchogue since 2004, reported symptoms on March 15 and was hospitalized March 25, his wife, Romielyn, said.

Richard T. Margulis, the hospital's chief executive, addressed the death in an email to the entire hospital staff on Wednesday: “You are all heroes, getting our community through this terrible storm and you are appreciated beyond words.”

In an interview earlier in the week, before Guillermo's death, he said the region's medical community was bracing for a growing number of employee fatalities.

“Just the nature of this disease and how radical it is and how sick people are, we’re going to see those types of events happen during the course of this pandemic,” Margulis said.

Other hospital staff who have died of COVID-19-related illnesses include an employee of St. Catherine of Siena Medical Center in Smithtown and one laboratory technician and two detox counselors at Nassau University Medical Center in East Meadow, officials said. A nursing assistant at A. Holly Patterson Extended Care Facility in Uniondale, which is part of the public health care system that runs the medical center, also died from complications of the virus.

In Suffolk, COVID-19-positive employee counts as of Wednesday or Thursday were about 220 at Stony Brook University Hospital, 96 at Southside Hospital in Bay Shore, 94 at Huntington Hospital, 61 at Long Island Community Hospital, 29 at Mather Hospital in Port Jefferson and 27 at Peconic Bay Medical Center in Riverhead.

The number of these staff members still out of work ranged from about 60 at Stony Brook to four at Plainview. 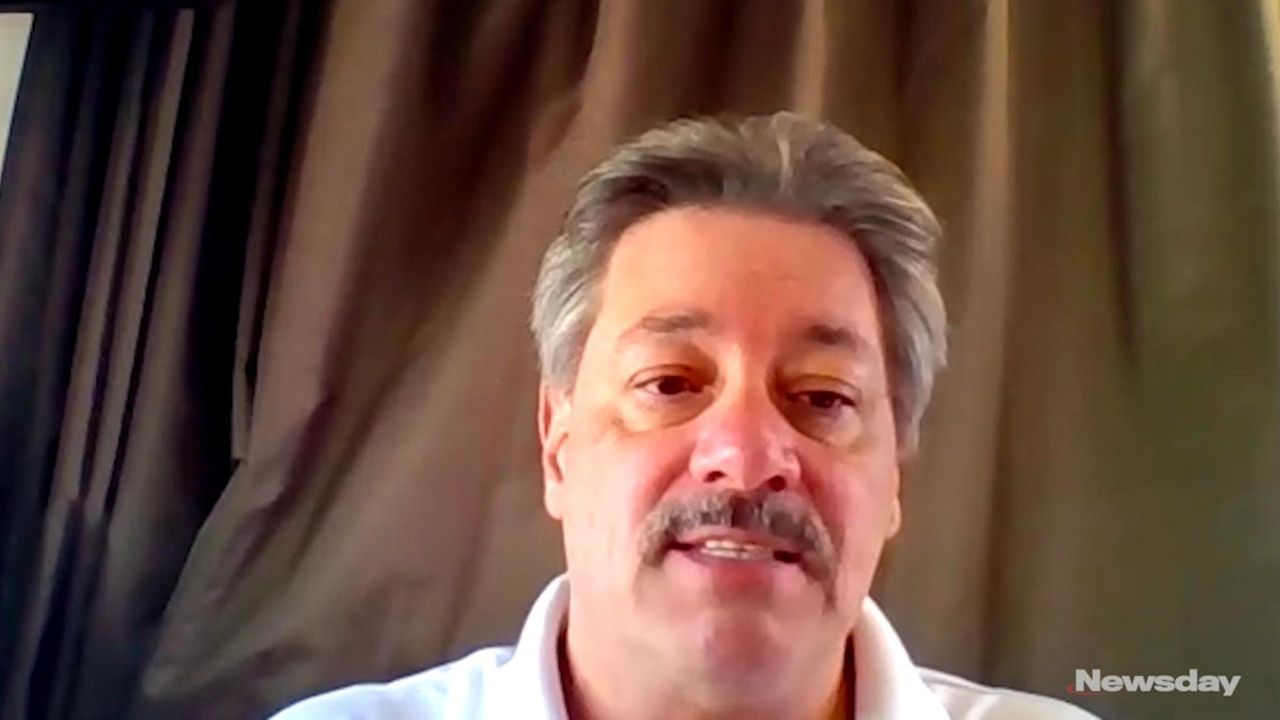 Hospital staff that got COVID-19 nearly 1,200 On Saturday, Michael Chacon, Long Island program representative for the New York State Nurses Association, spoke to Newsday about how healthcare workers are getting sick because they are being forced to reuse personal protective equipment. Credit: Newsday / David Schwartz

“We're not making this information public, but thanks for your attention to the health of our staff," NYU-Winthrop spokeswoman Anne Kazel-Wilcox wrote in an email.

Mount Sinai South Nassau Hospital in Oceanside did not provide the information at publication time.

Most of the COVID-positive hospital workers on Long Island, nearly 900, are part of Northwell Health's sprawling system, which employs 72,000 people including in New York City and Westchester. In total, about 1,800 Northwell staff members have been impacted, including 564 nurses and 123 physicians.

Less than 1% of staff was out as of Friday at most Northwell facilities, said system spokesman Terry Lynam.

The system's hospitals are testing any employee who is showing symptoms. They’re put on paid furlough and self-quarantine until test results come back. If positive, they can return to work if they haven’t had a fever for 72 hours.

They are not retested.

“We’ve provided our employees with PPE — N95 masks, gowns, visors, gloves, from the beginning,” Lynam said. “Clearly some are contracting the virus at work. We’ve gone to great lengths to make sure they are protected.”

He said like everyone else, Northwell has had to scramble to get a supply of personal protective equipment and have been asking employees to reuse them as much as possible, but following federal and state guidelines.

But Michael Chacon, Long Island program representative for the New York State Nurses Association, said that nurses and other front-line health care workers are getting sick, in general, because they’re being forced to reuse personal protective equipment like gowns and masks, intended to be used once.

“These infection control measures defy any standards that used to be put into place,” said Chacon, who lives in Commack. “You can’t walk in a shooting gallery without being hit by a stray bullet every once in a while.”

Margulis, Long Island Community Hospital's chief executive, said the hospital had put out a public call for volunteers to help relieve its workforce, and continued to push local, state and federal officials for more personal protective equipment, as well as explore “untraditional means” such as dealing directly with overseas suppliers.

“I think it’s understood that there will be more employees in health care organizations that will become sick as time goes on," he said.

“As far as I know NUMC is doing everything it can to help the employees by giving them appropriate gear where they can get, when they have it, and making it available,” he said.

But no matter the efforts of the individual hospitals, employees will remain on edge.

Beausejour, the Long Island Jewish Valley Stream nurse and union representative, said she and her colleagues have grown more weary as they have witnessed their co-workers getting sick.

“I think the anxiety is we go to work and we’re aware COVID is out there,” she said. “But the mode of transmission, we’re still learning about it, to be honest with you.”

Among those who live with her is her 74-year-old mother. Beausejour said when she returns home after work, she follows the same ritual: She enters through the back door, scrubs herself clean, puts the clothes in the wash with a strong disinfectant and puts her shoes in a bag.

“I’ve spoken to nurses who are not sleeping in the same room as their spouses for fear of contaminating,” she said. “This is the reality. When they say we’re making sacrifices, these are sacrifices.”

CORRECTION: John Abruzzo, a registered nurse from Seaford who died from the coronavirus, did not have contact with coronavirus patients, a Northwell Health representative says. Abruzzo, 63, was a nurse at Huntington Hospital, part of the Northwell Health system, for 13 years. A story about Abruzzo’s death appeared in Monday’s paper.