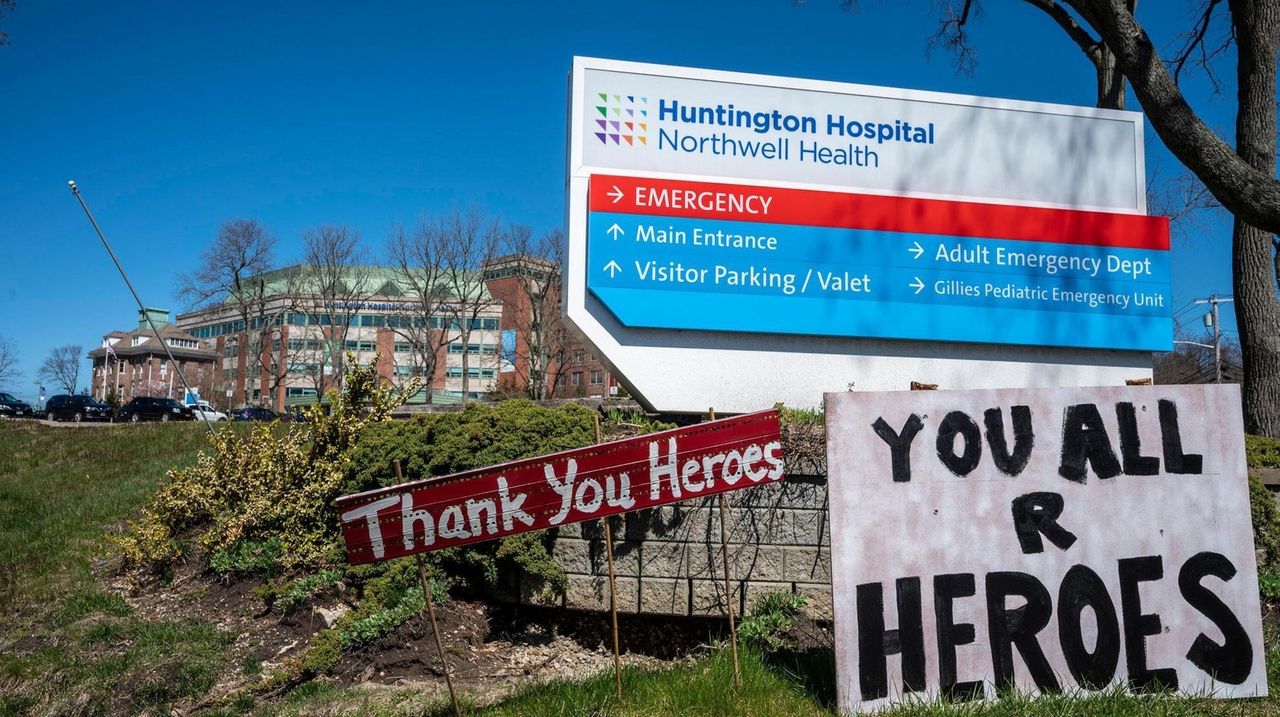 Huntington Hospital caregivers recently performed an emotional rendition of "Let it Be" in the hospital lobby. The video was captured on a cellphone by a security guard. Credit: Dillon Platt

For as long as anyone can remember, Huntington Hospital has commemorated the birth of newborns with a rendition of Brahms' "Lullaby" over the hospital speaker system.

In an effort to lift spirits of patients and staff amid the sometimes overwhelming battle against COVID-19, a new tradition has begun: a daily dose of the Beatles’ “Here Comes the Sun.”

The song is played at a shift change, generally about 3 p.m. — followed by an inspirational message of the day delivered by vice president and chief nursing officer Susan Knoepffler, Northwell Health spokeswoman Alexandra Zendrian said.

Zendrian said playing “Here Comes the Sun” also has been adopted at other Long Island hospitals run by Northwell.

The song title also is etched on a lobby bulletin board noting how many recovered COVID-19 patients have been discharged by Huntington Hospital — a shot of which appears, updated daily, on the hospital’s Facebook page Huntington Hospital Meals, which also thanks donors who’ve sent food and care packages for hospital staff who are battling the outbreak.

The board, as shown, reads: "here comes the sun . . . We discharged 203 COVID Patients! We are STRONG. FOCUS on the GOOD. Thank You Frontline."

There are hearts and other graphics adorning the board, too.

The webpage also features posts from grateful doctors, nurses and staff to local residents and businesses who’ve made donations of food and other items.

Zendrian said that just Wednesday the hospital received a huge donation from a benefactor of much-needed hand-sanitizers. There’s also big thank you posted from the community, the Facebook page now a huge source of communication between staff and the public they serve while being able to practice safe social distancing.

One post is of a sign erected on the front lawn of the hospital that reads: "Heroes Work Here."

Another post on the page, recorded last week, shows members of the Huntington caregiver staff, adorned in gowns and protective face masks, singing a version of another famous Beatles’ song: "Let It Be," with anesthesiologist Dr. Floyd Forbes playing piano.

Another post features a drive-by parade by local firefighters, while still another is from a local family — Michael Pinelli, Nicholas Pinelli, Anthony Pinelli and Luella Pinelli — playing a version of “Here Comes the Sun” in their backyard.

2:23
Pfizer shot may be available to kids as young as 12 in NY starting Thursday, Cuomo says
1:27
Kids rebound from COVID lockdown in parent-run hoops league
'Hamilton,' 'Lion King,' 'Wicked' coming back
Franchises touted as a post-pandemic opportunity
Have you lost a loved one to coronavirus? Tell us about them.
LI to start receiving $841M in federal stimulus funds
Didn’t find what you were looking for?