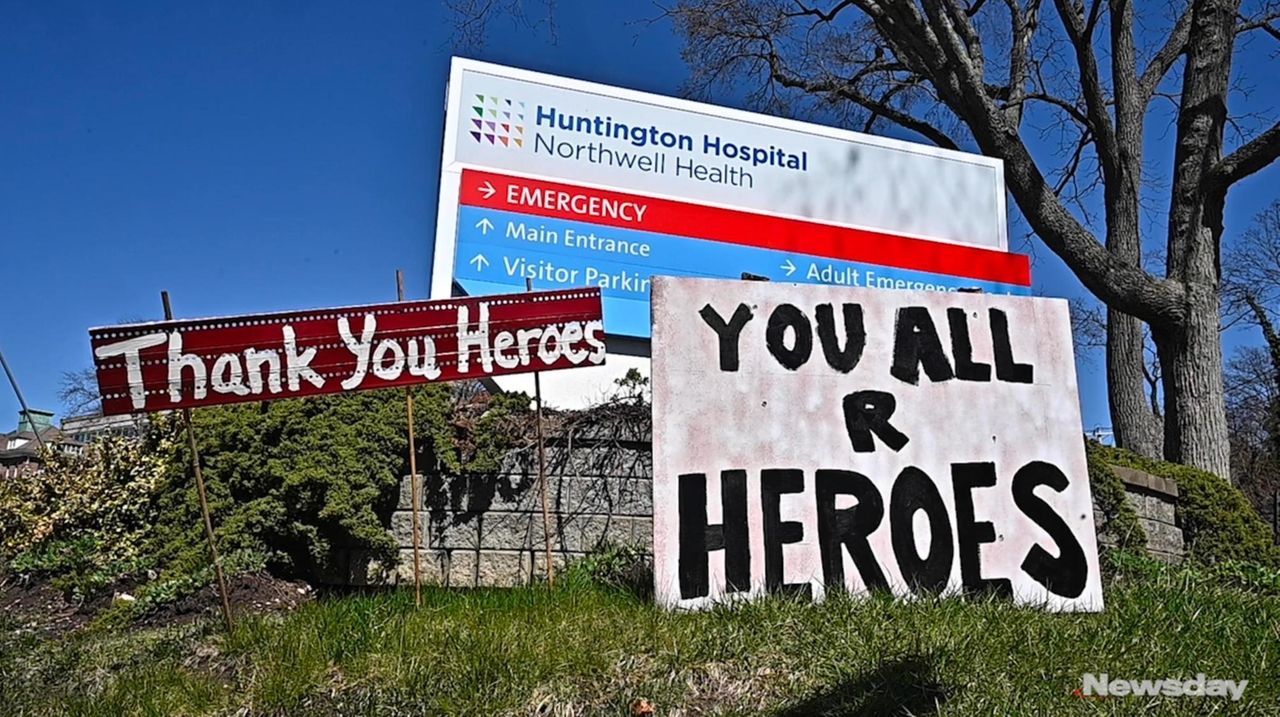 Days away from what is said to be the apex of the coronavirus outbreak, Long Island's first responders are facing a shortage of personal protective gear as they fight on the front lines of this virus. Meanwhile, Huntington Hospital lost one of its own as a nurse died of coronavirus. Newsday's Pat Dolan has the story. Credit: Newsday Staff; Stony Brook University

A registered nurse from Seaford has become the first nurse in one of the largest hospital networks in New York to die from coronavirus, a hospital official said.

John Abruzzo, 63, was a nurse at Huntington Hospital, part of the Northwell Health system, for 13 years where he worked on the medical-surgical floors, hospital officials said.

“He had the most winning smile, which made him bigger than life,” Susan Knoepffler, chief nursing officer at Huntington Hospital, said in an interview with Newsday on Saturday.

John Abruzzo's wife, Mary, said he died Thursday. She said he had no other underlying health issues besides his diabetes, which she said was under control.

Mary Abruzzo was not sure when her husband tested positive for COVID-19.

"He went to the doctor and the doctor told him to go into isolation. He just got progressively worse. He finally drove himself to Huntington Hospital," she said.

"He was a registered nurse. He was up for any challenge," she added.

Northwell Health will continue to pay his salary for six months to his family, hospital officials said.

He "was among the brave caregivers dedicated to their patients during this challenging time," read a hospital statement. "We mourn his loss and hold his family in our thoughts and prayers."

Abruzzo began working at Huntington Hospital in 2002 as a security officer before becoming a nurse at the hospital in 2007.

“He sought a career in nursing as he was inspired by family with health care issues and wanted to help others,” said Knoepffler, who worked with Abruzzo for eight years.

He attended the University of Texas at Arlington from 2008 to 2011, where he received his bachelor of science degree in nursing, according to his LinkedIn profile.

“John had an inner call to duty as a nurse,” Knoepffler said. “He was everything a nurse should be: compassionate, stellar at what he did, caring and a team player.”

Abruzzo had two main priorities when he wore his scrubs — his patients and his co-workers, she says.

“He treated his patients like friends and he even became friends with them,” Knoepffler said. “There’s not that many men in nursing in comparison to women, so he would always call his co-workers his ‘girls.’ He wanted to take care of all of them. I think that’s why the devastation hits the team so deeply.”

But Abruzzo was also known for one more thing, stealing pens, recalled Knoepffler.

“They would always say, ‘If your pen is missing, John took it,’ ” she said. “Well, when they opened up his locker, all these pens fell out. It was kind of hysterical.”

The team of nurses and staff who knew Abruzzo were devastated, she said.

“The team is grieving right now,” Knoepffler said. “We’re persevering and taking care of our patients with even more grace and more strength, just like John would have been doing. In an odd way, it has strengthened our resilience and our desire to provide the absolute best care for all the patients that will come after him.”

Many units and floors at the hospital have been redesignated to care for COVID-19 positive patients. Most, if not all, hospital systems across that state have had an “all hands on deck” approach to the surge of patients with coronavirus.

Knoepffler described a bustling scene of nurses working tirelessly on every floor but somehow managing to keep a positive attitude.

“It’s a blur of blue and green scrub and gown attire,” she says, “and still they are smiling, they are laughing appropriately and they’re an inspiration to me.”

Nurses have been using their own mobile communication devices, cellphones and iPads, to help those patients without phones get in contact with their loved ones who in most cases are barred from visiting because of the pandemic, she said.

“That takes an emotional toll on the staff, to know that the only person touching the one lying in the bed is them,” Knoepffler said. “There’s no loved one coming to kiss them and hug them. We do our best to lay a hand on them to make them feel connected still.”

The chief nursing officer says she’s never seen anything like what’s she’s experienced during this pandemic.

“I almost search for words that really can capture what’s happening,” Knoepffler said, adding that “crisis” and “unprecedented” don’t capture everything she is seeing. “There are no words that you can use at this point to describe it because it’s too unreal. It’s too unbelievable.”

Abruzzo was cared for at Huntington Hospital before he passed, Knoepffler said. “I’m glad he was with us because it was sort of his second home.”

Knoepffler tried to recall her last conversation with Abruzzo, but what was vivid in her memory was the last time she saw him.

“I was outside his room giving him a silent prayer,” Knoepffler said. “That was my last contact with him.”

Abruzzo's survivors include his wife; his son, Thomas Kutcher; his daughter, Christina Ravenes; his son-in-law, Franz Ravenes; and his grandchildren, Logan, 13, Kaia, 11, and Brinley, 6.

His body was cremated and a memorial service will be held when the pandemic is over.

CORRECTION: Nurse John Abruzzo did not have contact with coronavirus patients, a Northwell Health representative says. An earlier version of this story said that those patients were in his care.